What to know about the upheaval in Sri Lanka 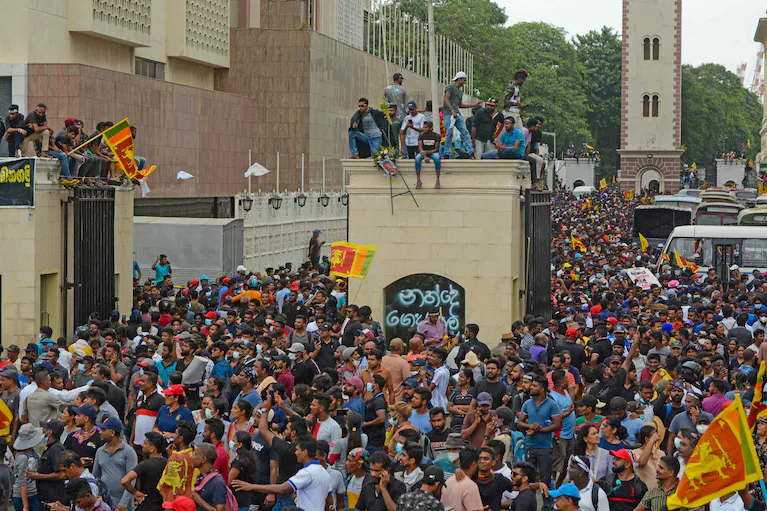 (Washington Post))The president of Sri Lanka agreed to step down later this month, the speaker of the country’s parliament announced, after protesters stormed the presidential home and office Saturday in a dramatic escalation of public anger over the government’s handling of a deepening economic crisis. Thousands of demonstrators descended on the presidential palace in Colombo, the capital, demanding the resignation of President Gotabaya Rajapaksa, whose family is held responsible by many for the country’s dire economic straits.

Prime Minister Ranil Wickremesinghe said Saturday he too would give up his post “to make way for an All-Party Government.” The president fled to safety Friday ahead of the protests, which saw dozens of people injured in clashes with police.

Saturday’s demonstrations were the latest in a months-long protest movement sparked by an unprecedented economic crisis in the South Asian nation. Fuel has almost run out, food prices and hunger have spiked and the country defaulted on its foreign debt repayment. The turmoil has felled the political dynasty that dominated Sri Lanka for nearly two decades.

Here’s how Sri Lanka got here:

Why are Sri Lankans protesting?

Sri Lanka is an island nation of 23 million people off the southeastern coast of India. The Rajapaksa family has exerted political sway over the country for most of the past two decades, with Mahinda Rajapaksa serving as president between 2005 and 2015 and then later as prime minister under his brother, Gotabaya. Mahinda was known for quashing the Tamil Tiger insurgency to bring Sri Lanka’s 26-year civil war to an end in 2009.
The family has experienced a dramatic fall in recent months as Sri Lanka struggles with its worst economic crisis since it gained independence in 1948, when it was called Ceylon. By early this year, food staples like rice had doubled in price from the year before. Inflation has caused hunger to worsen since then, with about 70 percent of Sri Lankan households reporting in a United Nations survey that they had cut back their food consumption. The country has been plagued by gasoline and electricity shortages.

Inside the collapse of the Rajapaksa dynasty in Sri Lanka

Nightly protests in the capital kicked off in April, with protesters calling for the Rajapaksas to leave politics. Some demonstrations turned violent. Gotabaya’s cabinet resigned, but Mahinda refused to step down. In early May, clashes broke out between Mahinda’s supporters and anti-government protesters at Temple Trees, the prime minister’s compound. Mahinda said he would resign, but the violence continued, and the army took hours to arrive. Mahinda was eventually evacuated.

Gotabaya named Wickremesinghe to replace his brother as prime minister on May 12. But the protests carried on as the crisis worsened. Sri Lanka defaulted on its debt in May — and Wickremesinghe said last month the economy “faced a complete collapse.”

With its national Ceylon Petroleum $700 million in debt, countries and organizations abroad have been reluctant to send fuel to Sri Lanka. Medical workers, teachers and bankers in Colombo last week protested the lack of fuel they need to provide essential services. Some Sri Lankans have boarded boats to attempt dangerous, illegal journeys to India or Australia.

How did the economic crisis get so bad?

Nirvikar Singh, an economics professor and South Asia expert at the University of California at Santa Cruz, told The Post last month the Sri Lankan government has been “astonishingly irresponsible and incompetent” at managing the country’s economic policy since Gotabaya took office in 2019.

Far from Ukraine, Sri Lanka is the epicenter of a global crisis

Corruption and cronyism compounded the problem, with allegations implicating Mahinda and other members of the Rajapaksa family. In 2021, leaked financial documents included in the Pandora Papers showed that a niece of the Rajapaksa brothers had millions of dollars stashed in offshore accounts.

Global spikes in food and energy prices caused by the war in Ukraine have exacerbated the crisis. “This is the Ukraine effect,” Alan Keenan, an analyst at the International Crisis Group, told The Post in April. “A credit line for fuel you thought could last two months now lasts one. Even if you get a bailout, you’re buying less food, less fuel, less medicine.”

How have political leaders responded?

Since Wickremesinghe took over as prime minister in May, his government has resorted to desperate measures to alleviate some of the economic pain, including giving government employees a day off to grow crops in their backyards and allowing public sector workers to take five years of unpaid leave to seek jobs abroad.

The government has tried to negotiate with the IMF for a bailout, but Wickremesinghe said the effort has been complicated because the country is bankrupt. Sri Lankan authorities have sought aid from India and China, and Gotabaya called Russian President Vladimir Putin this week to ask for help with importing fuel.

But the measures have done little to alleviate the country’s economic woes, leaving many Sri Lankans unsure of how they will survive. Calls mounted for the president to resign.

“People from all walks of life have united with one intention — to demand that the corrupt president who clearly does not have a mandate, step down,” Himantha Wickremerathne, a 34-year-old lawyer who joined the protests, told The Post.

Hours after protesters seized the president’s residence on Saturday — with some jumping in the pool or cooking in the kitchen — the speaker of Sri Lanka’s parliament said Gotabaya Rajapaksa would resign from the presidency on Wednesday.

Hafeel Farisz in Colombo, Niha Masih and Gerry Shih in New Delhi and Ishaan Tharoor in Washington contributed to this report.