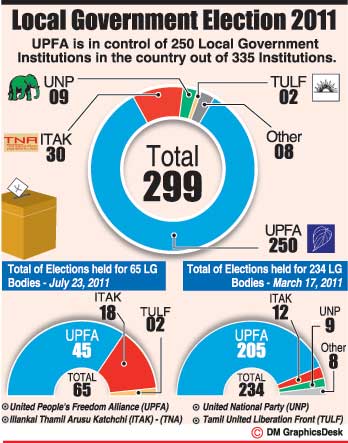 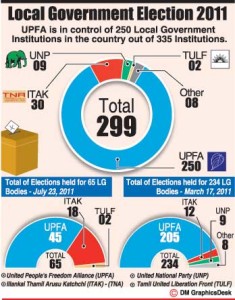 The 65 results disclosed in the mini election reveals a one party domination in the South (UPFA) and the North (ITAK). The call is close only in the constituencies that do not have a Tamil domination where a keen contest was seen between the UPFA and the ITAK.

It is not the defeat that should disturb the UNP, which was expected, but the margins displayed in the majorities that are alarmingly stupendous. For the return of the UNP to power requires a tsunami and not a tiny wave. It has to be considered in the background that the Government has been in power for the last 23 years and held these local government authorities at the last local election. The dissatisfaction element against the Government that ordinarily should surface appears to be minimal, more so, in the rural constituencies. Parochial unresolved issues would be a factor at elections on the village turf. Yet the Government has emerged with a bouquet of roses.

The rifts within the UNP have undermined the party and a healing process is a pre- requisite to gain confidence.

The Sinhala electorates that were under threat from terrorist attack continue to display their loyalty overwhelmingly to the President. In a nutshell, notwithstanding hardships, the gratitude for the elimination of terrorism has not worn out and could still be the major factor at a future General/Presidential election. Unless UNP supports the Government on allegations on war crimes they could be out of office for a lifetime. Foreign allegations on war crimes seems to work in favour of the Government as the Sinhala electorates appears to bind around a Government that has made them safe and secure. This result is a personal message from the voters to the hostile international community to show where their loyalties lie- a factor that will be discounted by the humanitarian lobby that cares less for the voice of democracy for which they stand.

JVP could be dismissed in one sentence on these results. They are out of the political sight of the people in a woeful performance at the elections. Fonseka’s DNA element that attracted votes in Kesbawe, Kaduwela and Homagama electorates to acquire two seats in Parliament for the Colombo district have deserted the JVP and substantial numbers have shifted to the UNP in Kesbewe and to the UPFA in Kaduwela. In Kesbewa, the vote of 14 percent that DNA held has been reduced to 4 percent for the JVP while the UNP had increased its voting strength from 23 percent to 42 percent while the UPFA has dropped from 63 percent to 54 percent. This shows a flow from the DNA to the UNP. The reverse appears in Kaduwela where the DNA vote has been reduced from 15 percent to 4 percent for the JVP with the UPFA increasing their vote base from 59 percent to 67 percent while UNP registers an increase of 3 percent. In Homagama where the UNP (28 percent vote at the general election) was disqualified from contesting, the UPFA had increased its vote bank by 18 percent while the JVP was able to add only 2 percent to their vote. Fonseka vote is drifting to both the major parties but certainly not to the JVP.

Politically, Fonseka has been reduced in status to waving a hand to invisible crowds on television at his appearances in court.

ITAK has emerged in the North as formidable as the Government is in the South-to a lesser degree the TULF in Killinochchi. It clearly establishes that the Government has not won the goodwill of the people of the North notwithstanding its massive development undertakings-possibly the benefits are not percolating to the people. It shows that the grievances of the Tamil people have not being understood by the Government. The government has a base vote of around 20 percent in an early outing and as the only challenger to the ITAK, places itself in a position of growth provided it attends to the basic needs of the people without concentrating on development alone.  Government’s impact on the Northern vote is as dismal as the UNP showing in the South. The difference is that the Government is new to the district. But will the growth of the ITAK extend to the districts of Mannar and Vauniya where the UPFA did well at the local elections in March 2011.

Nevertheless democracy has taken root in the North with 50 percent- 60 percent registering the vote compared to the previous 15 percent at the general elections. With more voting, ITAK has shown its muscle by increasing its vote base and showing the limited strength that the Government displayed at General Election is evaporating with time or on more visiting the polling booths. This result will be carefully scrutinized in New Delhi and must be read assiduously by the LLRC in giving mind to the grievances of the Tamils.

Devananda factor could be discounted outside his bases making his minimal vote, a reflection of a minor fraction in the North. It’s a vote of the islands within the island.

SLMC has still lost more ground and would have to be a partner in every government to survive. Its ability to capture votes is based on the power it holds in ministerial portfolios. Like the JVP it’s a party of the past.

Too much should not be read into local government elections where the Governments made a landslide in the recent outing. There is always the preference to sail with the winner notably the government in power, at local government elections. What is significant is whether we are moving towards a UPFA/ITAK rule in the South and North with the UNP becoming a token opponent at election time but with numbers in parliament due to proportionate representation.