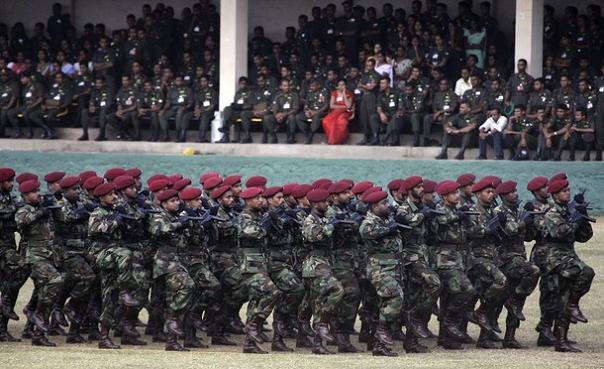 Kumar Davit
The Wimps have collapsed like a house of cards; and worse if the Divineguma Bill is enacted and Basil’s empire expands by Rs80 billion the sharing out of the 2013 budget allocations between ministries will be as shown in the accompanying diagram. It may be argued that 80 billion is a worst case scenario and 60 billion is a more realistic estimate of the increase in Basil’s muscle; in that case his prospective empire shrinks to 14% and the crumbs left over for the Wimps increase marginally to 34%. I have also shown the allocation for Education and Higher Education (Rs65.8 billion in total) as a separate slice on the pie chart since this is the burning topic of the day thanks to the FUTA strike action.

Among the Wimps are many erstwhile champions of devolution, including the brave knights of the Dead Left, who heroically “opposed the 18th Amendment in principle but supported it in practice”; a version of the dialectic that would have floored Hegel and Marx in one karate shot! Also among the Wimps are one time stout defenders of devolution such as Rajitha, Dilan and Douglas who offered to lay down their honour or lay down their cabinet portfolios, but when it came to the crunch had no hesitation about which one they would choose to lay down.

Towards a Corporatist State

Anybody who thinks it was the Secretary of the Judicial Services Commission, who was assaulted by a squad of pro-government goons, would be dead wrong. This is not an attack on the JSC Secretary; it is an unmistakable message to the Chief Justice: “Bugger off or this is what is in store for you.” The CJ is a lady and – no offence meant – maybe they think psychologically a soft target. This is a message to the judiciary, the legal profession and to anyone who dares defy the siblings. However, it goes even deeper; essentially it is not even about a ruling cabal that brooks no opposition. No the cabal thinks and strategise long-term; the looming agenda is about an emerging Corporatist State, so let me dwell on the concept a little.

Though the word fascism is of Italian origin (fasci, meaning tightly gripped bundle), high fascism in its most ruthless manifestation is identified with Hitler and the Nazis; the Mussolini original which came to power in 1922 is a more corporatist, say a softer version. Here are a few key words we can link with Mussolini’s Corporatist State; ardent nationalism, totalitarianism in the sense of bringing everything under the umbrella, if not the direct control of the state, a perverse kind of socialism, and top-down state control of trade unions, public administration, police, military, judiciary and the economy. It did not smash every vestige of independent activity, Church, learned societies, universities and scientific bodies as Nazism did. It was called national syndicalism, in that it gathered populist organisations, anti-communist unions, business interests, the media and some notable Italian intellectuals under the patron umbrella of Il Duce. Hence there was a degree of patron-client relationship in Mussolini’s Corporatist State and if you sense you are reading this in Colombo and not Rome, well the similarity is not of my making!

Divinaguma another nail in the coffin

The most obnoxious feature of the Divineguma Bill is that it expands the Corporatist Empire of a Rajapaksa sibling by somewhere between Rs60 billion and Rs80 billion. The second abominable feature is that, it is an instrument for the centralisation of power rendering impotent even the barebones of devolution now in place. I say barebones since the existing provincial councils are but vassal instruments of the regime with backbones moulded of the softest clay. If a sibling says “stand up! Sit down!” the honorable Councillors fall over each other to rise or to squat. The wimps in Cabinet long ago folded up their vertebrates and put them away; in post-Divineguma Lanka the provincial wimps will next be bypassed to the tune of tens of billions of rupees. And it is all being done with the fullest and most genuflecting corporation of Cabinet and Provincial Councils, assimilatory corporatism at its best!

Although there are weaknesses, inefficiencies and coordination weaknesses in the present distributed administration of poor relief these will pale in comparison with the abuses that will result from consolidating the entire programme in a monolithic Basil Rajapaksa empire. The regime will make use of its controlling position to make political capital out of poor relief which will also be twisted when necessary into an election gimmick. Political appointees loyal to the regime will secure sinecure appointments, efficiency will decline and corruption will proliferate. There will be conflict between the Empire and Provincial Councils except in the case of UPFA Councils which have little taste or gumption for asserting independence from the regime.

The net effect is that the consolidated monolith will be one more tool in the hands of the Rajapaksa Regime in its relentless bid to foist a Corporatist State on the country.