What Sri Lanka needs is not banning chemical fertilisers but a second green revolution – W.A. Wijewardena 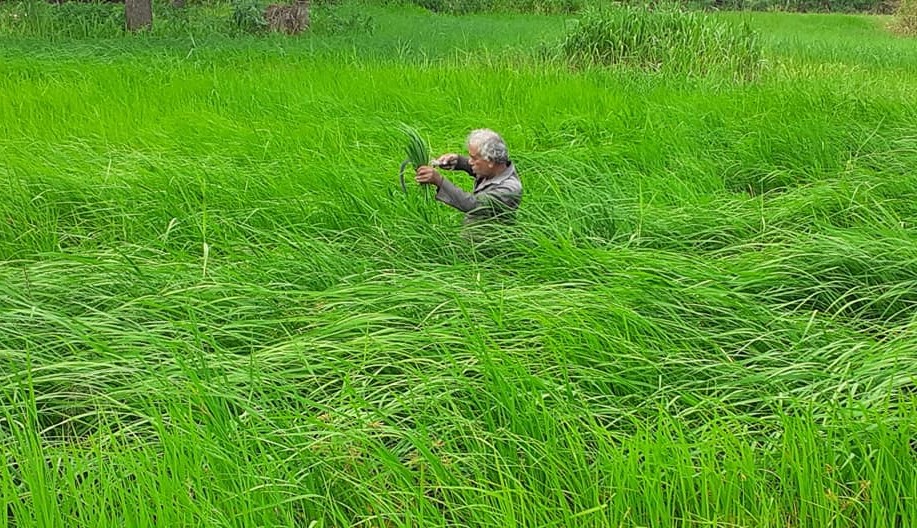 Banning chemical fertilisers and pesticidesW/a/vice of his economic advisors, has ordered that Sri Lanka should stop the importation of chemical fertilisers and pesticides to the country. The press release issued by the President’s Office in this regard can be accessed at https://www.presidentsoffice.gov.lk/index.php/2021/04/22/importation-of-chemical-fertilizers-will-be-stopped-completely/.

The decision has been justified on the following grounds: “The usage of chemical fertilisers leads to a better harvest. However, the negative consequences caused on human lives through pollution of lakes, canals, and groundwater due to the chemical fertilisers outweigh the profit. The health sector has pointed out that the effects of chemical fertilisers have led to a number of non-communicable diseases, including kidney diseases. The expenses to treat these patients and the impact on human lives caused by these chemical fertilisers remain high. In order to produce a healthy and productive citizenry, the Government must ensure the right of the people to access a non-toxic and balanced diet. President Rajapaksa said that measures will be taken to ensure that only organic fertiliser would be used in the agriculture sector in the country in the future.”

This justification is in line with the modern day thinking in society about the environmental protection, pollution, and toxicity in food production. There is a widespread fear among many that foods produced by using inorganic matter cause illnesses like diabetes, heart ailments, cancer, and internal organ failures. Since a healthy life is the most valuable asset which one can have, any policy that would ensure a healthy life is readily accepted by all. Consequently, organic foods produced by using organic nutrients are much in demand.

When concerns were raised by some agriculturists that the proposed ban of chemical fertilisers will cause a drop in agricultural output, the Government promised to compensate farmers for such losses, but did not elaborate on how the deficiency is filled.

It seems that the Government has taken a calculated risk when it decided to ban the importation of chemical fertilisers and pesticides. Today farmers are cultivating hybrid varieties which depend on the use of chemical fertilisers and pesticides to sustain the output levels. Hence, when these two inputs are denied to farmers, a sudden drop in the output is unavoidable. It seriously threatens the food security, on one side, and causes losses to farmers, on the other. This is fertile ground for food riots and farmer agitations.

Both are toxic and will cause piercing of the normal social fabric. Hence, to keep people from starving, Sri Lanka will have to spend foreign exchange for importing food items. As a result, it is unlikely that Sri Lanka will have an immediate net gain of the ban.

As I have argued in a previous article on food security, there are already limitations for food production caused by a lack of main resources for same, namely, land and water (Available at: http://www.ft.lk/columns/Food-security-It-is-biotechnology-that-is-to-rescue-mankind-from-imminent-hunger/4-717161). Given these limitations, ensuring food security for Sri Lankans will be a gigantic task for the Government. If there is a further drop in food production due to the banning of chemical fertilisers and pesticides, Sri Lanka’s food security is seriously threatened. Some relevant excerpts from this article are as follows.

“The problem of ensuring food security in a background of rising populations in the world has been a matter of concern by global community from time to time. In the 18th century when there was a population explosion, the British economist Thomas Malthus, in a book titled ‘An Essay on the Principle of Population’ and published in 1798, predicted that the population will increase at an exponential rate overtaking the world’s capacity to produce foods. As a result, he also predicted that there will be massive starvation, leading to famine, disease, war, and calamity. But this did not happen because the population did not increase at the rate at which Malthus predicted and food production increased by leaps and bounds due to the employment of technology, improved fertilisers, and pesticides. The issue was finally resolved by the introduction of what is now known as Green Revolution in 1950s and 1960s”.

“They included the development of High Yielding Varieties of crops, use of chemical fertilisers and pesticides, better farm and water management, and the expansion of irrigation infrastructural facilities. India which was on the brink of famine and starvation in late 1950s was in the forefront of the Green Revolution. It started agricultural activities on modern lines in Punjab which was famous for its heavy involvement in agriculture. Having adopted the new semi-dwarf rice variety called IR8 developed by the International Rice Research Institute in Manila, the Philippines, and using better water management and chemical fertilisers, India was able to convert itself from a rice deficit country to a rice surplus country. IR8 was dubbed miracle rice because of its high yield when it is cultivated with the application of fertilisers”.

“Like India, China too was successful in increasing its agricultural output by using improved varieties, chemical fertilisers and pesticides, and better water management. Like in Sri Lanka, China’s agricultural production is mainly done by small holder farmers. Yet, it has not been an impediment for using new technologies, improved fertiliser, and pest control systems, and increasing yields. Its high yield hybrid rice technology has helped it to increase the rice yield across the nation to 7.1 tonnes per hectare. Comparatively, the global average is only 3.9 tonnes per hectare. In the case of conventional rice, the yield has been only 5 tonnes per hectare”.

Despite the increase in the last three decades, Sri Lanka’s yield levels in all agri-products are below those of world’s better performers. In rice (after paddy is threshed), Sri Lanka had a yield level of 1,000 kg per Ha in 1950s. With the opening of virgin lands in the Mahaweli Project, the yield levels increased to 2,300 kg in 1990s. But it got saturated at that level and in 2020, the country had recorded a yield level of about 2,500 kg per Ha.

This should be compared with the yield levels of 7,056 kg in China, 7,399 kg in Greece, 7,534 kg in Spain, 7,910 kg in Turkey, 8,373 kg in Egypt, 8,374 kg in USA, and 8,771 kg in Australia. Hence, Sri Lanka, despite its best efforts with fertiliser subsidy and other incentives, has reached its peak. If the country does not go for a second green revolution soon, it will be hard for it to feed the rising number of mouths in the future which is projected to be 23 million locals and another 5 million tourists in 2032. There will certainly be a rice deficit unless the present yield levels are improved.

The story of coconut is the same. Sri Lanka’s coconut yields amounted to 6,100 nuts per Ha in 1996. It has fallen to 5,500 nuts by 2020. Comparatively, better performers like Thailand produces 6,733 nuts per Ha, Myanmar 8,800 nuts, Indonesia 6,767 nuts, and China 10,615 nuts. Thus, Sri Lanka’s plantation sector badly needs yield improvement if it is to survive in a competitive market. The sudden denial of chemical fertilisers and pesticides will certainly deliver a death blow to this industry.

Need for a second green revolution

What is needed by Sri Lanka at the present juncture is to go for a second green revolution to improve its agricultural yields. As mentioned above, the first Green Revolution was based on the development of high yielding varieties, application of chemical fertilisers, and pesticides. The revolution was carried out by scientists and engineers and not by politicians, though their blessings were offered to them. For instance, the Indian green revolution was carried out by the scientific community at the instance of the Prime Minister Lal Bahadur Shastri, according to Gurcharan Das who wrote the book titled India Unbound in 2000.

The present Government in Sri Lanka has also launched a green revolution but it appears that the scientific community has not been assigned a leading role in that. As the press release from the President’s office has indicated, the objective of the second green revolution has been to increase the quality of foods and not the quantity of foods. The quality comes in the form of supplying foods not contaminated by toxins and not contributing to the degradation of environment. Hence, it is ‘greening agriculture’ in its modern day use rather than launching a green revolution.

Greening the agriculture rather than launching a second green revolution

The main instrument to be used by the Government in greening agriculture has been the use of organic fertilisers which are said to be free from chemicals, toxins, and other unhealthy elements. Organic fertilisers come from the transformation of perishable waste matter back to their natural elements. Before the green revolution of 1960s, Sri Lanka’s farmers used cow dung, ground animal bones, and pulped and fermented leaves including paddy straws to fertilise their paddy fields. This was done largely by farmers in Jaffna.

Since there was a shortage of cow dung in Jaffna relative to the demand, there was a lucrative trade in cow dung between the North Central Province and the Northern Province. Lorry drivers carried cow dung from the North Central Province to the Northern Province on their forward journey and transported Jaffna produce back to Colombo in the return journey. This was broken during the war period during which the Jaffna farmers were even starved of chemical fertilisers due to a government ban.

Nostalgic memories about cultivation practices in the past

This trend changed after the country had both extensive and intensive farming of paddy in 1980s. The extensive farming came via opening of new lands for paddy under the Mahaweli Project and intensive farming was done by using improved varieties and applying chemical fertilisers and pesticides. As a result, the percentage of import of rice in the total consumption drastically declined. For instance, in 2019, Sri Lanka produced 3.1 million metric tons of rice while importing only 0.24 million metric tons or 7% of the requirements.

Do not shock-treat agriculture at the present juncture

What this means is that it is unlikely that the use of organic fertilisers could increase the production levels of major crops in Sri Lanka immediately. There will be a significant drop in the output levels forcing the country to import rice, on the one hand, and export reduced quantities of plantation crops, on the other. Sri Lanka will be hit by both. Hence, seeking to attain quality in agriculture by way of toxin-free foods and pollution-free environment by shocking the agriculture is not the best policy to be adopted today. This should be done over a period of time with careful planning and not haphazardly as has been introduced today.