What right does the government have to terrorize a community? – Tilvin Silva 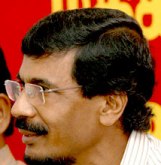 India and western powers led by the USA make use of these issues to interfere in internal affairs of our country. What the government should do is to show practically that democracy and human rights are protected in the country. There should be an immediate solution for the issues of democracy and human rights in the North. It is an issue not only for the North but also for the whole country. However, forces that are waiting to interfere in our country are being given that opportunity by the government by the manner they act.

The government appointed the ‘Lessons Learnt and Reconciliation Commission’ (LLRC). However, there is no indication that the government has leant any lessons.

Now there is a special issue. The government is carrying out a process of forcefully registering the people in the North. There is a house to house census that has been carried out by the government throughout the island. This is not an issue. However, forcefully carrying out a census in the North that is not carried out in other areas is not correct. Also, despite protest by the people photographs of all the members of the family are taken. This is carried out despite there is a court order preventing the act.

Such acts would not prevent people in the North coming to the conclusion that they are treated in a different way. The people who have undergone the experiences are scared to come out with their feelings. For, they have to live under the arbitrary administration of the government. On the 10th a group of Army men in civics had visited homes in Kopai and gathered information.

Comrade Thangeshwaran, the JVP candidate for Walikamam East Pradeshiya Sabha protested against this act. Then the group had left his home, had gathered information from other households and come back to Comrade Thangesharan’s home, had obtained information by force and photographed the occupants. The photographs are taken from mobile telephones which indicate the process is not carried out in a legal manner.

You know that yesterday (16th) night a group of people in army uniforms broke into a meeting organized by a group of TNA Parliamentarians, removed the public address system and assaulted the Parliamentarians’ security personnel. If the Members of Parliament are not allowed to hold a meeting what would be the position of ordinary people?

The people want to forget the bitter past and lead normal lives. What is the use of the military victory if the people in the North are denied their normal lives? This is a very serious issue. The whole country would be led towards a catastrophe if no voice is raised against this tyrannical administration.

The local government elections are held in the North. However, candidates are not allowed to carry out their campaigns freely. Why do we need such elections? The government talks of a broad political solution that would satisfy all. However, the government does not have such a solution. Still there are many in detain camps and prisons. The government is mum regarding them. Also, a large number of people have disappeared. The government should state what happened to them. Harassing people in the North who have already undergone immense trauma is against national unity as well as humanitarianism. What right has the government to terrorize a community that lives in the country? This government is an idiotic one that has not recognized threats to the country and its future. We demand that the forceful census being carried out should be immediately stopped.”

Former Parliamentarians and the Member of the Central Committee of the JVP Ramalingam Chandrasekar too participated.