What protection does a protestor holding a candle have in Sri Lanka? 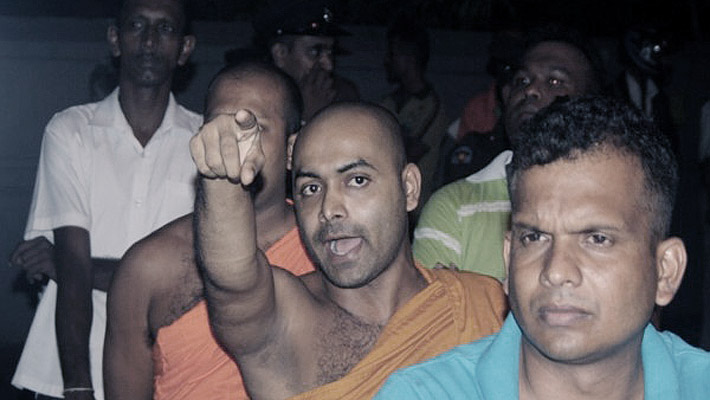 Kishali Pinto-Jayawardena
Hate pervades the air. It is sadly grotesque that amidst the Avurudu time of reflection and thanksgiving, what prevails is exactly the opposite.
Just this week, in the Ratnapura District, plantation workers of Tamil ethnicity clashed with Sinhalese villagers ironically enough after a Sinhala and Tamil New Year musical show. The clash was apparently provoked by remarks hurled by a few Sinhalese youth at some Tamil girls in the crowd, leading to retaliatory abusive comments by (presumably male) defenders of the girls.

This would ordinarily have merely amounted to temporary tensions caused by too much unwise revelry. However, it escalated into a bigger problem underlying simmering tensions between the groups when surrounding villagers joined in the fracas, with the housing scheme where Tamil plantation workers lived in the area, later getting pelted with stones. While interventions by community elders had managed to prevent the situation from getting worse, the trigger point of distrust remains.

This is just one incident which underscores the ugly heightening of tensions between communities in this country where during recent months, Muslims and Tamils have been at the end of vitriolic racist abuse by highly vocal lobbies masquerading in religious garb. Predictably enough, such carefully orchestrated campaigns, which are allowed to run unfettered by this government, results in the spilling over of tensions into physical fisticuffs even in instances that would not normally be the case. Tellingly, the spate of similar incidents in recent times certainly exceeds occurrences of this nature, even at the worst of the war inflicted years.

Indeed, the level of hate in this county as well as the conscienceless support given by the police to the hate mongers was well demonstrated by the outpouring of zenophobic anger by these same hate mongers when a spontaneous demonstration was held by some days ago on Havelock Road by citizens protesting against the anti-Muslim invective of the Bodu Bala Sena. Descending from tragedy to farce, the police officers on the scene arrested those who were peacefully holding candles rather than those who were violating the Penal Code by their hate filled chants. Is this what this country has come to now? Is this what ostensible peacetime has brought us?
Arresting peaceful protestors under spurious justifications that barely mask the determination of the government to allow only its view and those of its adherents to prevail is nothing new. We have seen similar police excessiveness against family members of disappeared persons, trade union activists protesting against corruption and even ordinary villagers peacefully protesting against arbitrary acquisitions of their lands.

The applicable legal standards are, of course, perfectly clear. No peaceful protestor can be threatened that he or she has infringed the law. Vague police threats that law and order is disturbed by peaceful protest do not suffice.

Protest fundamental to the democratic way of life

None other would know best of this basic legal principle than President Mahinda Rajapaksa himself, that most vociferous protestor during his days as an opposition politician. In fact, one of the most stirring pronouncements that the Sri Lankan Supreme Court ever made in this context was when the ‘Jana Ghosha’ movement in which he was a prime mover, was sought to be suppressed. Here, several political parties including the Sri Lanka Freedom Party engaged in a ‘noise protest’ as a means of showing their disapproval of the policies and actions of the government. The protestors were assaulted and tear gassed.

Famously, in striking these police actions down, the judges reminded the then United National Party government that “the right to support or to criticize governments and political parties, policies and programmes is fundamental to the democratic way of life, and the freedom of speech and expression is one which cannot be denied without violating those fundamental principles of liberty and justice which lie at the base of all civil and political institutions” (Amaratunga v Sirimal and others, [1993] 1 Sri LR 264).

For that matter, even exaggerated criticisms of government are encompassed within the protection of the law in theory as affirmed by numerous judgments of the Supreme Court. Judicial warnings in this regard are prolific.

As observed most fittingly in one instance where the Court ruled against the arrest of participants in a discussion who had been accused of conspiracy after police officers had eavesdropped on their speeches exhorting citizens to topple the government, vehement, caustic and unpleasantly sharp attacks on the government, the President, Ministers, elected representatives or public officers are not per se unlawful (Channa Peiris and others v AG and others, [1994] 1Sri LR 01).

These legal standards proudly developed by the Sri Lankan Supreme Court throughout the past few decades are now as they have been dissolved into thin air. They are legal theory now, no more and no less, obscenely refuted by brutish reality. In a country where a sitting Chief Justice can be taken before parliamentarians and grossly humiliated, what protection does the ordinary citizen have when holding a candle and engaging in a peaceful protest? This is a pitiable question indeed.

Yet for those of us who are alive to the humiliation and subjugation of peaceful protest in Sri Lanka, what is happening now is unacceptable. Commendably, individuals are in fact, speaking out in increasing numbers against this repression through personal narratives that are crowding social media. For many others who are oblivious to such happenings so long as they do not touch themselves or the members of their families personally, there is of course, no such problem.

But even the most ostrich-like in our midst should wake up to the portentous signs of pending racial and religious conflagration in which very few would be safe. Willful blindness to hate rhetoric that fills the air around us should stop at least now. Martin Luther King once said magnificently that ‘our lives begin to end the day we become silent about the things that matter. In the end, we will remember not the words of our enemies but the silence of or friends.’ His ringing words extolling courage should be hearkened to during these extraordinary times of despair.