What next for Colombia? 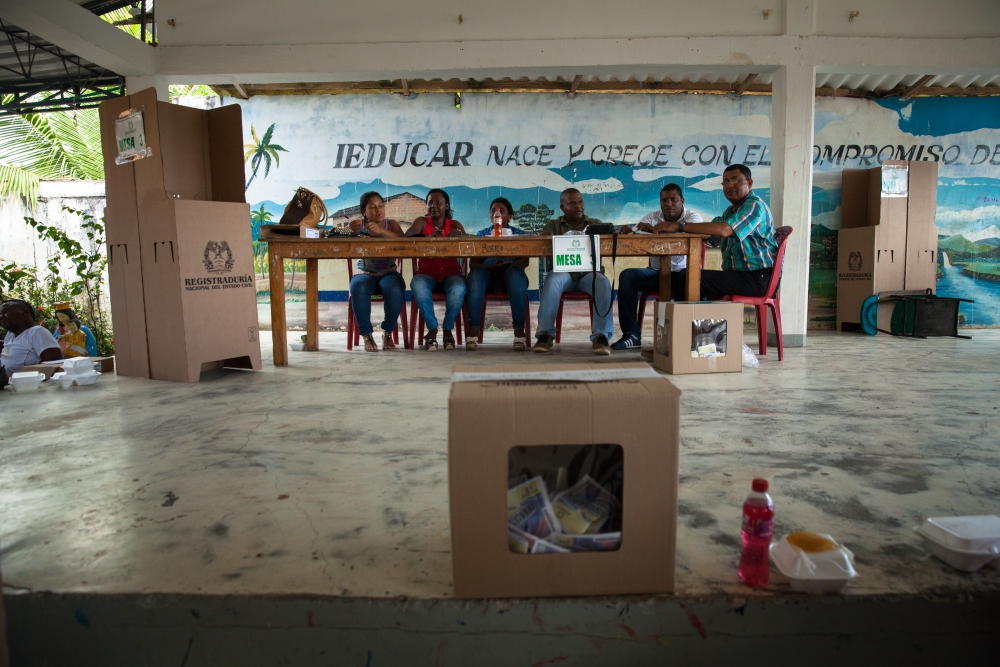 Days after Colombia voted ‘no’ to the terms of a peace deal between the government and the FARC rebel group, the country is still struggling to come to terms with the unexpected result and what it means for the nation’s long and elusive search for peace.

A ‘yes’ vote would have paved the way for an end to more than half a century of fighting between the government and the left-wing Revolutionary Armed Forces of Colombia, or FARC.

The conflict with the FARC and other armed groups has claimed more than 260,000 lives, the majority of them civilians, and displaced nearly seven million people.

But just over half (50.21 percent) of those who cast their ballots on Sunday voted ‘no’ to the question: “Do you support the final accord to end the conflict and build a stable and lasting peace?”

In the hours following the announcement of the result, both the government and the FARC issued statements calling for calm and emphasising that a June ceasefire would remain in place.

But on Monday, FARC chief Rodrigo Londoño, aka Timoleon or “Timochenko”, insisted that the peace agreement signed on 26 September was legally binding, irrespective of the referendum result.

Then, on Tuesday night, President Juan Manuel Santos announced that the ceasefire would end on 31 October.

Londoño responded on Twitter: “And after that, the war continues?”

That indeed is the question that now hangs over a country that had become increasingly polarised in the run-up to the plebiscite.

The sense of division was not helped by conflicting messages around what Colombians were being asked to vote on. While President Santos campaigned for “Yes to peace”, the opposition’s slogan was “No to the accord”.

Legally, the government was responsible for educating the public about the contents of the 297-page peace accord. And yet, Santos’s government was also behind the ‘yes’ campaign.

“It wasn’t clear to voters what was instructive and what was the ‘yes’ campaign,” said Pedro Vaca, director for the Foundation for Freedom of the Press (FLIP).

“It was very dirty. What we had was a political campaign, not an information campaign,” commented Rafael Batista, a local journalist.

And yet, the government’s attempts both to educate the public and promote the ‘yes’ campaign, failed to reach the entire country.

Refugees International conducted a fact-finding mission among people displaced by the civil war and found “large numbers of displaced people who at best were uninformed or, at worst, had fundamental misgivings on the accord’s provisions,” said Francisca Vigaud-Walsh, a senior advocate with the organisation.

In Norte de Santander – a province that saw an overwhelming vote against the accord – Vigaud-Walsh noted that, “Nearly all Colombians we interviewed said that the peace deal would not improve their lives.

“Peace agreement or not, they are currently experiencing increased threats from the ELN guerrilla group.”

The National Liberation Party (ELN) was not a party to the peace deal.

Enthusiasm to get out and vote was low too. Historically, Colombia has a low voter turnout rate, but only 38 percent of registered voters participated in Sunday’s referendum. That’s the lowest turnout rate since 1994.

In addition, despite the simple Yes/No option on the ballot, more than 250,000 votes were left blank or found to be invalid, the highest rate in over half a century.

Part of the problem may have been the short timeframe that was allowed for new voters to register – just five weeks between the announcement of the plebiscite and voting day.

In a country with one of the world’s highest displacement rates, an unknown number of those most affected by the conflict were left unable to cast their votes.

Vigaud-Walsh of Refugees International said that many displaced people would have had to return to their places of origin in order to vote.

“[That’s] a costly option for the vast majority, both in financial and security terms,” she told IRIN. “Their inability to vote may have been a factor in the outcome of the plebiscite.”
Erika Piñeros/IRIN
Official wait at the voting station in Necoclí, Antioquía

The devil was in the detail

‘No’ voters have been keen to make clear that they did not reject peace, but the terms of the accord which many felt gave too much away to the FARC in terms of amnesty for confessed war crimes and political power, among other issues.

“I voted ‘no’,” said Ana, a 42-year-old nurse from Colombia’s northwestern Uraba region. “We all want peace, but not like this. Those accords were not transparent or fair,” she added, referring to the secretive nature of the initial peace talks between the government and the FARC, and the fact that the deal does not extend to all armed groups.

Speaking at the World Economic Forum in June, President Santos warned that, should Colombians reject the peace deal, “we have ample information that the FARC are ready to go back to war, an urban war which would be even more destructive than the rural war.”

Whether Santos was using scare tactics or genuinely feared a return to war is unclear.

The leader of the opposition and the ‘no’ campaign, former president Alvaro Uribe, was due to meet with Santos on Wednesday to present his party’s demands for a renegotiated peace deal.

“Our standards of justice, reparation, attention to victims and truth have to be higher,” said opposition spokesman and former vice-president Francisco Santos. “We will work with the government to be able to redirect this accord.”

But the FARC may be unwilling to compromise on major sticking points for the Uribe camp, such as prison time for its leaders, payment of compensation to victims and those found guilty of crimes being barred from public office.

An anonymous source, who is in regular contact with the FARC high command, told IRIN, “It’s clear [the FARC] are looking for other things. There’s a lot of economic interest there.

“Colombians are too divided now, and the ones who will decide everything are the ones at the top, as always.”