What is the Rajapaksa regime really offering in terms of a political settlement? 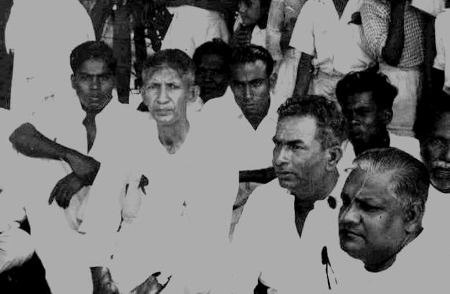 By Paikiasothy Saravavanamuttu
There is to be another parliamentary select committee to find a political settlement of the ethnic conflict. The simple question is why, given that there have been many committees, all party ones, the famous Mangala Moonesinghe Committee way back when and the more recent APRC. All labored and reported and that was that.

There are also talks between the TNA and the regime. Will they continue and if so what relationship will they have to the deliberations of this proposed select committee?

At the heart of the matter is the sincerity and commitment of the regime towards a political settlement. The public rhetoric is that the military victory was not enough and that a political settlement is necessary. Yet we have not been told as to what this could be apart from that it should be within a united and unitary Sri Lanka and home grown.

The evidence points to a conclusion suspected by some, including this columnist, that the military victory is indeed considered the solution and that keeping alive the talk about a political settlement is in the nature of play acting to placate international opinion which in turn is relieved that tougher decisions and/or the exposure of the limits of their leverage is thereby postponed, yet again.

What is the regime really offering in terms of a political settlement if as the available evidence suggests, it desires and intends to go back to a pre-1987 constitutional status quo?

There is a consensus within the regime, between those who wield real power and influence within it that the unitary state now reinforced by a military victory is the end of the story. For them it has always been and for them, it ain’t broke and therefore there is no reason to fix it. It is not that the regime is eternally grateful to the Sinhala nationalists, or being held hostage by them. They both think alike.

The political settlement farce will go from APRCs to talks with the TNA to a parliamentary select committee and probably all of the above again and again in rotation as long as the international community continues to talk about a political settlement.

As to what the key players in the international community will do once they realize that the farce cannot be sustained anymore remains to be seen. (Presumably the regime has some concerns on this score or else it could come out and say that there is no need for a political settlement). Most important though is what this does to the Tamil polity now caught up in the throes of the second phase of local government elections.
The TNA has a problem. It is keen to show, the international community and India in particular, that it is not rejectionist when it comes to invitations from the regime to engage. This is integral to their need to demonstrate that they have come out from under the LTTE shadow. Domestically though, they will have to calculate as to whether talking indefinitely with land and police powers off the table, no list of detainees, attacks on meetings and now a parliamentary committee, will lose them credibility in the eyes of their constituency in the north and east. That is surely what counts in terms of power and leverage as opposed to what can be acquired from across the sea, whichever sea.

The local government elections will provide an indication of its electoral fortunes which buoyed by the Panel Report, the Channel 4 documentary and violence against its MPs and supporters will probably be quite favourable. What happens thereafter needs serious strategizing. Integral to this is the proposed committee and the issue of participation in it.

Having held to a political settlement as an article of faith, does Tamil political representation continue to engage with a regime that does not seem at all serious about it?

Can they accept a pre 1987 constitutional status quo or Thirteenth Amendment Minus?

What are their sources of leverage if any in an engagement in which they are perceived of as representatives of a defeated polity?

Statesmanship on the part of the president will go a long way in laying this issue to rest and in taking the heat off his regime internationally as far as human rights accountability is concerned. This though seems a pipe dream.

In this context Tamil political representation must consider coming together on the basis of common principles re a settlement and a common position on Thirteenth Amendment Plus as crucial to the movement of this country from a post-war phase to a post-conflict one in which the sources of conflict are not sustained or reproduced. And as important, a common position on what is to be done if and when talks with the regime go nowhere.

There is a sense of going back to the future. Will it be one of satygrahas or will it be one of adapting to the exigencies of the day? Or will it be one that breeds armed resistance? God forbid it should be the latter. With a regime that is so ideologically committed to the unitary state and riding high, current Tamil political representation has a huge challenge and responsibility in defining the future not just of the Tamil polity but of the country as well.

If Plan A is to talk, is there a Plan B when the other side firmly believes there is nothing to talk about?