What is the position of the TNA with regard to its President Mr Premachandran’s statement of interim adminstration? 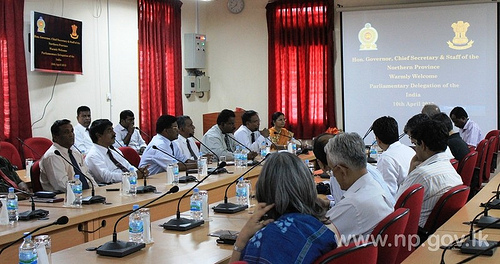 Dr.Dayan Jayatilleka
It was doubtless in the spirit of the Sinhala-Tamil New Year that the Tamil (ultra?) nationalists presented the Sinhala hawks the gift of especially moronic remarks to the visiting Indian parliamentary delegation.
Here we are, with the 13th Amendment and provincial level devolution hanging by a thread, the most important state official in the island advocating its abolition
and an opinion poll in the Daily Mirror with its sophisticated metropolitan readership showing only 33 % in favour of retention, and what do the Tamil nationalists do? True to form, they disown and denounce the 13th Amendment and call variously for an interim administration outside the Sri Lankan Constitution and supervised by India and/or the UN.

The report by Meena Sirinivasan in The Hindu says: “In Jaffna, where the MPs spent nearly two days, the emphasis was on the need for transitional administration and for India to shed its “obsession with” the 13th Amendment — which followed the Indo-Lanka accord of 1987 — as it was “inadequate”. Civil society groups said starting with a clean slate would work better…Tamil National People’s Front (TNPF) member and lawyer Gajendrakumar Ponnambalam reportedly emphasised that the 13th Amendment was not an adequate starting point in addressing the problems of the Tamils…President of TNA Suresh Premachandran said: “We told the visiting MPs that the ongoing genocide has to end here. There are serious livelihood issues prompting Tamils to leave the country. We need an interim administration, overseen by India or the United Nations, until there is a final political settlement for the Tamils.”… One of the BJP MPs asked them if the Northern Provincial Council elections would provide a “window of opportunity.”

In response, civil society members are said to have prescribed a “transitional administration” model, outside the current Sri Lankan Constitution, as an alternative, where in, Tamil representatives have actual powers in realms of education, health and livelihood issues. “In this model, the Sri Lankan government will also have a role and so will representatives of various communities. If the government is willing to engage with this option, we could work out the modalities,” he said.” (‘Shed Obsession with 13th Amendment: SL Tamil Parties to Indian MPs’, The Hindu, April 12, 2013).

Now it was wildly generous of the Tamil civil society representatives to assure the Sri Lankan people that in their proposed model which is an alternative to the 13th Amendment, “the Sri Lankan government will also have a role”. Tempting as the offer is, I rather think the Sri Lankan government will – and certainly should– decline to “engage with this option”, as will the overwhelming bulk of the country’s citizenry.
In no country can there be an administrative arrangement outside that country’s Constitution. This does not mean that no alternative models should be explored but they have to be incorporated into the Constitution by means of reform along the lines prescribed by the Constitution. Any model outside the Constitution will by definition be unconstitutional and illegal.

The very advocacy of such a model implies that those who advocate it not only have scant regard for the Sri Lankan Constitution but do not respect the need for any Constitutional process and reform either. Hence, they are not urging a radical reform of the Constitution but a model which is extra-constitutional. Doubtless they are aware that a reform of the Constitution will require a two thirds majority in parliament and consent at a referendum. The advocates of a model outside the Constitution and the constitutional process obviously do not care about the democratic principle of deriving legitimacy from the consent of the majority of one’s fellow citizens. It is by means of successive, interlocking referenda that the Good Friday accords were ratified.
Thus, the thinking of the advocates of this model is not lost on the reader: what is manifest here is an utter disregard of the need to convince a democratic majority of the fellow citizens of the island, a refusal to accept Sri Lanka as a single country and to respect the sovereignty of the Sri Lankan state.

Almost as dangerous as the Northern Tamil ‘civil society’ model, and in one sense even more so, because he is a leader of the predominant Tamil political formation, are the views of TNA President Suresh Premachandran who may well be the Chief Ministerial candidate of the TNA at the Northern Provincial Council elections, and thus may well be the next Chief Minister of the strategically sensitive North. It must be recalled that Mr Premachandran was an EPRLF strongman supporting his comrade Mr Vardarajaperumal’s threat of a Unilateral Declaration of Independence (UDI) in 1990, and that was not against a Sinhala–Buddhist Rajapaksa or an SLFP administration but against the manifestly multi-ethnic, multi-religious, multi-lingual and multi-cultural President Premadasa and his UNP administration.

Old habits die hard.Apart from the lunatic reference by Mr Premachandran to “the ongoing genocide”—which if it had a tincture of truth to it, would have drastically foreclosed the possibility of the portly parliamentarian making these remarks to a visiting Indian parliamentary delegation—there is his demand that “We need an interim administration, overseen by India or the United Nations, until there is a final political settlement for the Tamils.”

What is the position of the TNA with regard to its President Mr Premachandran’s statement? Unless and until the TNA and its leader publicly distance themselves from it we must assume that they either concur or do not strongly disagree or are unable to exercise control and will be unable to do so in future.

Clearly Mr Premachandran has in mind a Kosovo type protectorate of the UN and/or India. Equally clear he has forgotten that Sri Lanka, unlike former Yugoslavia, did not lose the war; it won it. A state that under diverse, successive administrations, and with a war raging, refused this path of capitulation, is hardly likely to treat this demand with anything other than the contempt it deserves. Such a state, a nation and an army are hardly likely to take a second look at these negotiating demands which were last advanced by Anton Balasingham.

What then should the response of the Sri Lankan State be, under this or any future administration?

The denunciation by the Tamil nationalists of the 13th Amendment on grounds of ‘inadequacy’ is the best evidence that it is not, and is not regarded as an adequate platform for their project. Thus the Government can proceed, albeit with alertness, to implement the 13th Amendment by electorally activating the Northern Provincial Council as promised and in the time frame promised to our oldest (and wealthiest) Asian friend, Japan. It can also proceed to treat that Council, whatever its composition, transparently fairly and even generously, in a manner credible and convincing to the neighbour and the world community; especially to world opinion.

This is the way—and there is hardly another—to regain the moral high ground and replenish some of the ‘soft power’ that we have lost, post-war. The economic costs to us of disappointing Japan are likely to be prohibitive, as the state will have nowhere to run and no one to run to for financial support. If there is manifest adventurism on the part of the radicals in the TNA who may seek to push beyond the Constitutional parameters, the country’s basic law permits the Council to be dissolved, at least until a generation of Tamil politicians are elected who would accept the realities of domestic geopolitics and power.

Both Tamil and Sinhala nationalisms have to be contained and can be contained within the framework of mutuality and reciprocity. Red lines must be drawn on above and below, beyond and behind, the existing scheme of provincial devolution. Between the positions of the President of the TNA and those in the South who advocate the abolition of the status quo, lies the Middle Path.

There is of course another, less moderate, prudent and pragmatic way to go. The Hindu reports that the Northern “civil society groups said starting with a clean slate would work better.” It is not without reason that it is counselled that one should be careful what one wishes for. Democracy is such a marvellous thing that the vast majority of the Sri Lankan citizenry may not only agree with the Tamil nationalist slogan of the need to “start with a clean slate” they may also have more than one instrumentality through which to grant that wish.
If pushed by Tamil Nadu, the Tamil Diaspora radicals, the TPNF and the TNA militants, a clean constitutional slate, ‘cleansed’ that is of the existing provisions for provincial devolution, could well be the wedge issue that the next election is fought on, just as Sinhala Only was at the historic elections of 1956. The Opposition as it is currently led will get creamed far worse than Sir John Kotelawala did then, particularly with a candidate who is seen to have all of Sir John’s deracinated ideological and socio-cultural negatives and none of his macho-militarist positives.

The abolition of the 13th Amendment is likely to be used as a defining electoral slogan, as the centre of gravity within the regime and its ruling troika continues to shift to the Neo-con hard Right; a creeping displacement which may impact on the choice of candidacy. The Sinhalese also have an Option B for an electoral backlash and ‘clean Constitutional slate’ with devolution resolutely back to Year Zero: after all, there’s always the General.