What is in it: The Divinaguma bill and its implecations 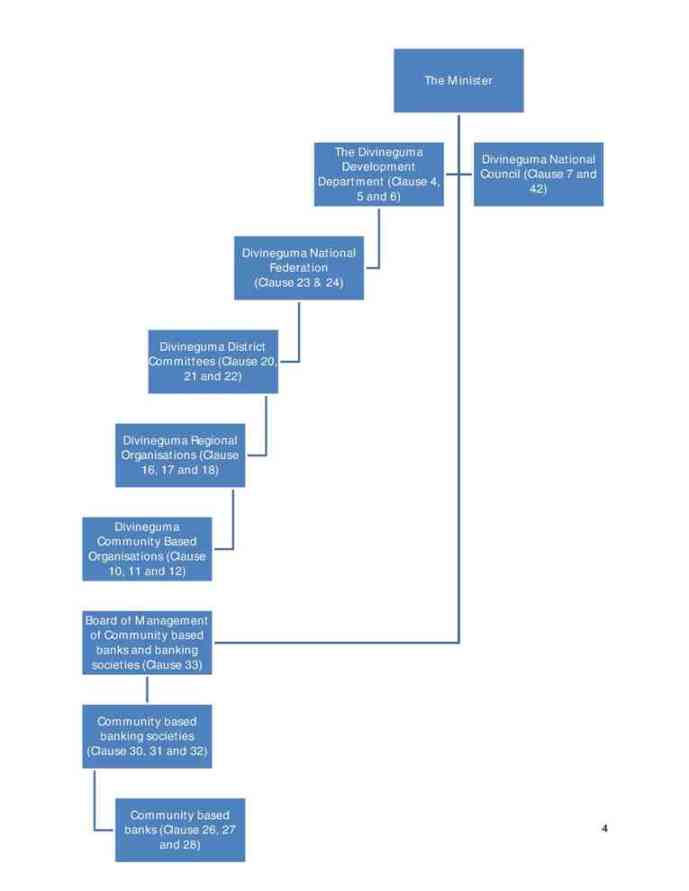 Note on the Divineguma Bill By Centre for Policy Alternatives
January 2013
Media reports in December 2012 indicated that the Divineguma Bill (referred to here as the Bill) is to be taken upfor a vote by Parliament in January 2013. This note has been prepared by the Centre for Policy Alternatives (CPA),with the objective of raising key issues related to the Bill and their consequences, if the Bill is enacted in its present form. CPA raised these issues in 2012, in both petitions filed in the Supreme Court challenging the Bill and in awareness raising material  produced in all three languages.

Background to the Divineguma Bill
The Government tabled the Bill in Parliament on 10 August 2012. CPA and its Executive Director challenged the provisions of the Bill in the Supreme Court (SC/SD 3/2012). Two other petitions were also filed in the Supreme Court. The petitions were taken up by the Supreme Court on 27 and 29 August and the determination on this matter was tabled in Parliament by the Speaker on 18 September 2012. In its determination the Supreme Court agrees with the submissions made by CPA and determines that Article 154(G) 3 of the Constitution needs to be complied with in respect of the subject matters referred to in the Provincial Council List and that it is mandatory for the Central Government to consult the Provincial Councils before placing such a Bill on the Order Paper of
Parliament. The Bill was thereafter withdrawn from the order paper of Parliament on 21 September 2012  and
was submitted for approval by each of the Provincial Councils. All eight Provincial Councils which  have been constituted voted to approve the Bill and it was also reported that the Governor of the Northern Province had given his consent on behalf of the Northern Provincial Council. Thereafter the Bill was again placed on the order paper of Parliament on 9 October 2012.5Upon being placed on the order paper of Parliament for the 2nd time the provisions of the Bill were challenged by several petitioners including yet again by CPA and its Executiv e Director. CPA’s challenge was on the basis that -amongst other things- the Bill has not been properly placed on the order paper of Parliament in terms of Article 154(G) (3) of the Constitution.


In addition to the challenges in the Supreme Court in 2012, CPA conducted awareness raising campaigns across Sri Lanka on the issue. This was due to the limited information publicly available on the provisions contained in the Bill and lack of awareness among the public including officials and representatives of the people regarding implications if the Bill was to be enacted. CPA stated then and reiterates now that the multiple challenges to the Bill were not to prevent the alleviation of poverty. Nor is the challenge aimed at preventing employees of the Samurdhi Authority, the Southern Development Authority or the Udarata Development Authority from obtaining pension
or other benefits as government servants. CPA recognises these are important issues that require attention and supports such processes if done in adherence to the Constitutional and legal framework in Sri Lanka. CPA’s challenge was against the attempt to usurp powers of the Provincial Councils and the consolidation of powers with one Minister with limited checks and balances.

CPA prepared a note in 2012 to provide a basic guide of the key provisions in the Bill and its impact if enacted. The present note is an update of the 2012 version, taking on board recent developments.While the Bill impact several different areas, this note will primarily address the concerns regarding its impact on devolution. CPA hopes that this note and other initiatives connected with the Bill will raise awareness among the public and relevant stakeholders on the scope of the Bill and how it can impact devolution, governance and the rights of individuals.

1. Structures that are to be established by the Bill
The Bill attempts to establish several structures, which are explained in the graph found below. Key areas of concern are the objects, powers and functions of the Divineguma development department (Clause 4, 5 and 6), Divineguma district committees (Clause 20, 21 and 22), Divineguma regional organisations (Clause 16, 17 and 18) and Divineguma community based organisations (Clause 10, 11 and 12),which are broad in their scope and cover a large number of subjects. 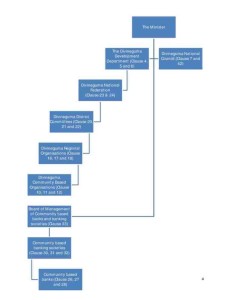 2 Impact on Devolution
As raised by the petitioners, the Bill includes a number of subjects contained in the Provincial
Council List. This would result in the Central Government being able to take over subjects that are
with the Provincial Councils as provided in the Thirteenth Amendment to the Constitution.
The following table identifies various clauses of the Bill, which affect subjects devolved to the
Provincial Councils.
This table was part of the Written Submissions tendered in SC SD 03/2012 and was also reproduced in the
determination of the Supreme Court which was read in Parliament on 18 September 2012. 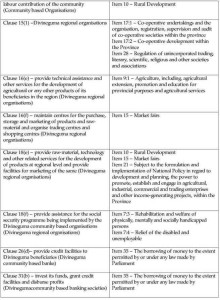 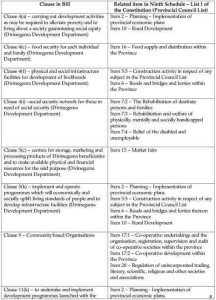 4. General Provisions
1. All officers and servants of the Divineguma Department are required to sign a declaration of secrecy in respect of all matters connected with the workings of the department (Clause 38) and will not be compelled to disclose information unless by a court of law or written law, thereby raising concerns of transparency and accountability of public officials.

2. The Divineguma Department or any authorized officer has the power by notice in writing to require any person to provide information requested (Clause 39). This provision is drafted in such broad language that it could be interpreted to mean that any person would be compelled to give to the department any information.

3. Any person who violates the provisions of the Divineguma Act (after it has been passed by Parliament) is liable (after a summary trial) to be punished with imprisonment or a fine (Clause 40). This provision is particularly problematic in light of the broad and vague nature of Clause 39 (requirement to give information the department requires).

5. Protection of Employment of Employees of the Existing Authorities12
1. Clause 43(e) (i) gives an option for the employees to join the Department and they would thereby become public servants. However, there is no provision in the Bill to protect their salary status. Further, there is no information whether and how existing employees are integrated into the public
service.
2. In terms of Clause 43(e) (ii), if the employees opt for voluntary retirement, they would be paid such remuneration as may be prescribed by the Minister who will decide arbitrarily without any guidelines.

6. Suggested Issues for the Debate on the Bill
The above sections dealt with specific provisions in the Bill that were challenged by CPA in the Supreme Court in 2012. In light of the impending debate in January 2013, CPA has listed below key issues related to the Bill that should be considered by political parties, representatives of the people, policymakers and others. The issues raised below are not merely limited to the Bill but have broader implications for democracy and devolution in Sri Lanka.

1. What is the reasoning behind the attempt to centralise power in one Individual/ institution/    level of Government?
2. The Government claims that the Bill will alleviate poverty and achieve sustainable development but is it necessary to centralise power to achieve these goals?
3. Why is the Bill attempting to undermine the Thirteenth Amendment to the Constitution which  grants limited powers to the Provincial Councils? This is contrary to the Government’s own    rhetoric of a political settlement based on the Thirteenth Amendment Plus.
4. Wide powers are provided to the Minister in the Bill but there is no rationale provided as to why    such powers are allocated to the Minister.
5. What are the safeguards in relation to the exercise of the Minister’s powers (Cabinet approval,    Audit etc) and are those safeguards adequate to prevent the abuse of power (i.e during elections)    and public finance?
6. Is the institutional structure that governs the proposed Divineguma Community based banks     adequate in order to protect the depositors?


8. Is the scope of the proposed secrecy clause (Clause 38) justifiable in light of its stated objective    of protecting the privacy of Divineguma beneficiaries?

9. The Government has in recent weeks defended the concept of the supremacy of Parliament.

Does this not extend to powers of Parliament as provided in the Constitution relating to public
finances? The Bill if enacted in its present form undermines Parliament’s full control over public
finances.

Centre for Policy Alternatives
The Centre for Policy Alternatives (CPA) is an independent, non-partisan organization that focuses primarily on issues of governance and conflict resolution. Formed in 1996 in the firm belief that the vital contribution of civil society to the public policy debate is in need of strengthening, CPA is committed to programmes of research and advocacy through which public policy is critiqued, alternatives identified and disseminated.

Please see here for on line version with footnotes:  as a PDF from here or view on the web here.