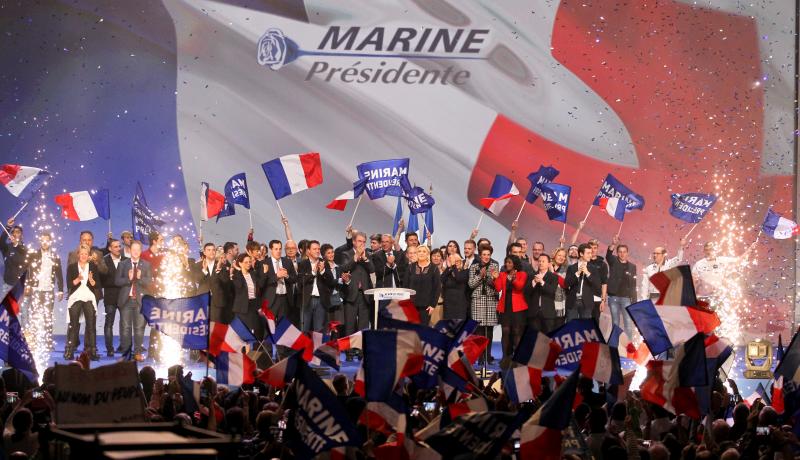 A victory for Marine Le Pen, coming after Brexit, would underscore that Europeans have moved from instinctive scepticism about the EU to active rebellion.

It is entirely plausible that the next president of France will be Marine Le Pen. After the Brexit vote in Britain and the election of Donald Trump in the United States, Le Pen, the leader of one of the oldest far-right parties in Europe, now smells victory in what her team is calling ‘the third battle’.

Le Pen can already claim the backing of more than one in four French voters. These National Front supporters are a disgruntled lot who are more likely than others to say they’re certain to vote. Although recent opinion polls suggest that Le Pen would most likely lose in the presidential election’s second-round runoff, her strategists believe that she, too, will prove the pollsters wrong — by winning the first round in April, and then knocking out her leading rival, the upstart centrist Emmanuel Macron, in the second round a month later.

They see the 39-year-old Macron as an ideal opponent, a former investment banker for Rothschild and a liberal elite technocrat who represents precisely the interests of ‘savage globalization’ that Le Pen rails against.

‘Macron is a living and breathing embodiment of the globalist elite,’ said one of Le Pen’s senior strategists at a recent presentation in London. (The briefing was conducted off the record, so I cannot attribute the remarks reported here to specific officials.) ‘How can a man from Rothschild understand French workers?’

According to her team, Le Pen expects to win a plurality and eliminate lesser rivals in round 1 by sweeping up protest votes. For the head-to-head contest in round 2, however, she will focus relentlessly on Macron’s privileged background and his close ties to the departing president, François Hollande, who has historically low approval ratings.

Le Pen’s team hopes that Macron’s economic liberalism will encourage traditional left-wingers either to abstain or back her own protectionist message, which is wrapped in the theme of national preference, the idea of putting native French workers first and introducing additional taxes on contracts for foreign employees. Le Pen’s populist rallying cry also includes promises to start a re-industrialization and to push back against global corporations like Ikea, forcing them to buy commodities locally and pay higher taxes if they hire non-French workers.

Le Pen, officials said, will also attack Macron from the right, arguing that he is soft on the perceived threat from Islam and jumping on his recent statement about multiculturalism and diversity in France — that ‘there is not a French culture’ — to tempt older traditional conservatives.

Assuming all this strategizing works — and even against the backdrop of 2016, that is still a stretch — what would a Le Pen victory mean for France, and for Europe?

In the short term, a National Front win would throw the European Union into a deep crisis. Political scientists have argued that over the past two decades, people’s attitudes toward the union have passed through two stages: from broad acceptance in the 1960s and 1970s to an instinctive skepticism from the 1980s onward. A victory for Le Pen, coming after Brexit, would underscore that Europeans have now arrived at a third phase: active rebellion.

But what of French domestic politics first? Le Pen’s programme rests on the assumption that her presidential victory is followed by her party’s achieving a parliamentary majority after elections to the National Assembly in June. Given that the National Front has just two seats in Parliament, Le Pen would need to draw on support from the centre-right Republicans. She is therefore gambling on the hope that this will be the year when the so-called Republican Front — an unwritten law in French politics whereby the main parties refuse to work with the National Front — breaks down.

This, too, is unlikely. But let us entertain the scenario that Le Pen does get this far. Since its formation in 1972, the National Front has won attention mainly for hard-right policies like restricting immigration and combating the ‘Islamification’ of French society. If she were to stay true to those commitments, President Le Pen would move to leave the Schengen border-free zone, slash net migration to 10,000 per year, strip dual nationals of their French citizenship and put 15,000 more police officers on the streets.

But of much greater significance is her position on the euro and the European Union, for a Le Pen presidency could spell the demise of the currency and a further unraveling of the union. Crises on multiple fronts — the re-emerging financial crisis in Greece, a creaking Italian banking sector, the prospect of more refugees arriving now that winter has passed and Brexit — are already placing dangerous stress on the union. Although growth is slowly returning to the eurozone, a French withdrawal on the orders of Le Pen could still deliver the currency union a fatal blow.

Le Pen is no mild Eurosceptic. She views the euro as a ‘political weapon’ that the European Central Bank, the European Union and global financiers have used to enslave France. Le Pen firmly believes that the euro is destined to fail and that while leaving would be costly, it would still be cheaper than hanging around for the complete collapse of the eurozone.

‘The French people are sitting on the Titanic, known as the euro, and they are listening to the violins,’ her strategist in London said. ‘We are going to push them off and into the lifeboats.’

Le Pen plans to do this by renegotiating the terms of France’s membership in the union, talks that conceivably would coincide with the already fraught Brexit negotiations. She will demand (opens in new window) a return of full national sovereignty, including monetary independence, fiscal and financial autonomy. Her lieutenants talk openly about wanting to leave the euro, redenominating French euro assets and debt in a new currency on a ‘one franc to one euro’ basis, and undertaking competitive devaluations. A newly independent Bank of France, they argue, could buy French government bonds in the secondary market and suppress yields.

To strengthen her hand in talks, her officials say, Le Pen would, in her first year in office as president, use Article 11 of the French constitution to conduct a referendum on whether France should leave the European Union altogether: Frexit.

Most French voters remain in favor of union membership and the euro. But given her programme, the very election of Le Pen would change the game: investors would sell off French assets, markets would fall and the eurozone recovery itself could falter. Ordinary French savers, worried about the risk of devaluation from a return to the franc, would rush to withdraw their euros for fear of capital controls being imposed, as they were on Greece. A major run on the euro, and capital flight spreading across the continent, would destabilize the currency union as markets began to anticipate its dissolution.

Of course, none of this may happen. After all, the likelihood of a Le Pen victory is small — if we’re to trust the ever-reliable opinion polls.

This article originally appeared in the New York Times.