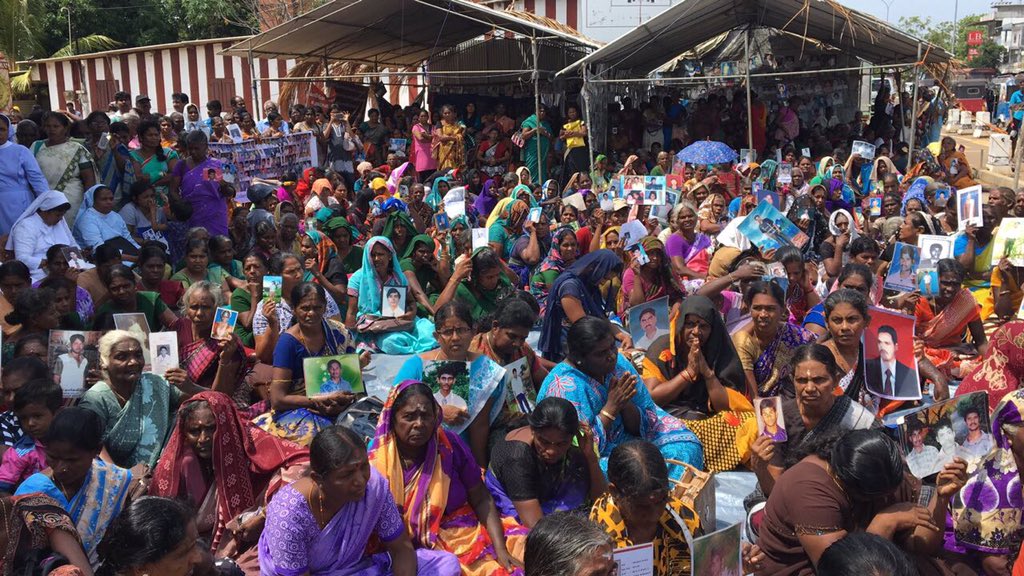 Image: Tamil people led by Organisation for the Families of the Forcefully Disappeared blocked the A 9 road on 29th for hours as part of their 100th day protest. Image credit @garikaalan.

In an open memorandum to president Sirisena, Organisation for the Families of the Forcefully Disappeared has warned that until their demands are met they would continue to advocate and take necessary actions if needed to pursue the cause. The memorandum has not elaborated what the necessary actions means. On 29th May they blocked the A 9 road for hours demanding that president respond to their demands immediately. Both their demands are not clear and the second one is based on the assumption of there are secrete detention camps in the country, which the government has denied repeatedly.

The memorandum which set out the demands of the Organisation for the Families of the Forcefully Disappeared follows:

MEMORANDUM TO HIS EXCELLENCY THE PRESIDENT OF SRI LANKA BY FAMILIES OF THE DISAPPEARED ON 30 MAY 2017, MARKING THE HUNDRED DAYS CAMPAIGN.

Your Excellency the President,
The peaceful campaign in search of the forcibly disappeared is continuing 8 years after the war was brought to its end in 2009. Our relatives were forcefully disappeared during the war or after its end and were either handed over to the authorities, abducted, taken away which being given rehabilitation etc. This campaign in search of our relatives who disappeared has become our life’s struggle now.

As our trauma is being used for the political benefit and selfish gains of individuals and institutions, we decided to take this struggle into our own hands and forge ahead till we reach our objective.

Although there are differences in ourselves, we are united in the formulation of our demands and have decided to lead the campaign ourselves with the support of those sympathetic to our cause.

Despite the fact that the war has been brought to an end, the root causes of the conflict i.e. the lack of a political solution for the ethnic conflict, matters relating to land and political prisoners as well as accountability issues at the end of the war have yet to receive due consideration for arriving at just solutions. This has caused many continuous peaceful campaigns in many places through which
Thazmizh people are striving to exercise their democratic rights.

We consider these campaigns as necessary and extend our sincere friendship to them. On the other hand, our campaign in Kilinochchi on behalf of the relatives of the forcefully disappeared is reaching its 100th day today.

Even though we have put forward numerous demands, we wish to prioritise two of them in this campaign:

We state that until these demands are met we would continue to advocate and take necessary actions if needed to pursue the cause.
Yours Truly,
Representative
Organisation for the families of the forcefully disappeared