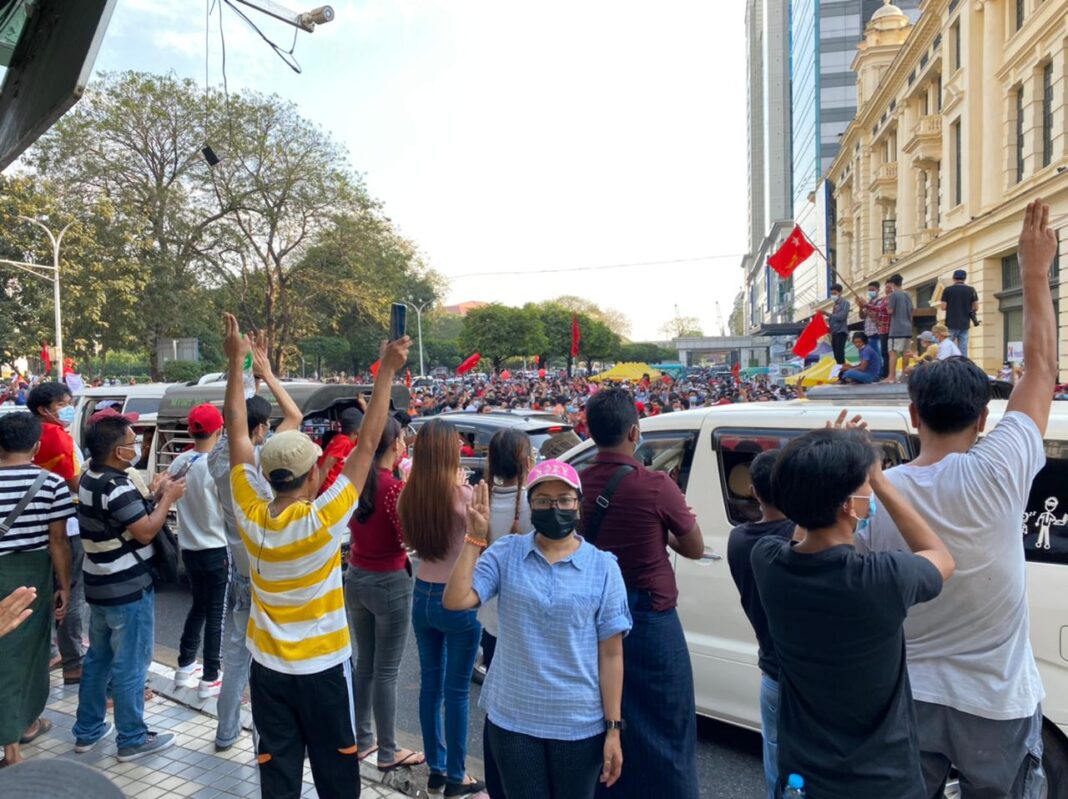 An interview with Wai Wai, a young female protester from Yangon, Myanmar. Interviewed by Sunanda Deshapriya.

Thank you for coming online. Just to start how was your day today?

Wai Wai: I started the day by calling my colleagues and friends to see where and when we are going to gather. We need to check every morning if any unknown visitors in the vicinity. And I check social media for the latest news.

Then I went out and took part in my township protests. I do not use my car anymore. During the election time, I had it pasted with our leader Aung San Suu Kyi’s campaign photo. Now it is hidden. I go around on my bicycle.

I just came back from participating in today’s protest in my township. And I am from Yangon. I have been on the street almost every day since the military took over the government. In every township protests take place.

Even today people came down bringing snacks and drinks to us. They show solidarity every day.

Today there were no attacks by the military in our township though the situation here is very suppressive and things are not ok. In other parts of the country, militarily attacked civilians. As usual young people were protesting this morning everywhere and they were on the streets. Even though the military attacks them young generation is not going back. They keep coming out to the street and they are protesting.

How many young people come out usually, for these demonstrations in your area?

Wai Wai: At different townships, different numbers of young people come out. because l some of the township’s population is larger than others. In some of the townships, 100 plus 200 or 300 plus comes out. It depends on the township. Even the middle-aged generation comes out to protest and then they stay with us during the protests against the military. You know everybody or the vast majority of the people in Myanmar want democracy and so they protest. Yeah.

Is the attitude of the military changing towards the protestors?

Oh, their attitude is getting bad to worse and they are getting very rough in trying to control the situation. Because it is like you know we don’t have any guns you know, we just sit down or we just stand and we just show what we want and say that we want democracy; We want them to release our leaders including our leader Aung San Suu Kyi, the president, and the civilians arrested. Then they shoot. As you know they even shoot with live bullets. Already more than almost 60 young people are dead. From 3rd March things have become worse.

How long do you think you will be protesting as so far the military is not giving in. What do young people on the street think?

Wai Wai: Young people are thinking that we need to become very, very stronger and stronger because you know it’s like their friends being killed by this military. You cannot let it go. So most of the people including the young generation are unhappy and upset. They think that they should come out on the roads because their friends are being killed. They don’t want to see any more people being killed. So they have to keep coming out on the road and show their desire for democracy.

How do you coordinate protests? Are there any informal networks for coordination? How do you know what is happening in other townships?

Not only in major cities but the whole country is protesting in coordination. We communicate through social media using the internet, like most of the people here used Facebook, Instagram, and now people are moving to Telegram and Signal. And also Twitter. Now the campaign is called CDM: Civil Disobedient Movement. Same where and somehow communications and protests are coordinated’ That is the CDM.

So your communication platform is Social Media?

Wai Wai: Yes, we depend on social media and social media also play a very important role here. That they are really bringing up the issues and the true situation.

All TV and print media is either controlled by the military or closed down. Yesterday military ordered a number of Media institutions to close down. People do not watch TV anymore. Because they talk nonsense. They talk bullshit I can say, I am sorry.

And also sometimes if we know each other’s contact numbers, we call each other and text each other to communicate.

And the thing is that, you know, the military cut down the internet from 1 am to 9 am. So we don’t have any communication after 1 am till 9 am in the morning. So yeah, and that’s the time military comes to arrest the young people so we have to be vigilant in the night. So we stay together. Last night I didn’t go home for instance. Military comes armed with machine guns to arrests protesting youth. If they can’t find the person they want to arrest they catch other people like son or daughter or father or someone like that. you know, something is not right with the military. Even they take away the dead bodies. They come to the family and pick the dead body. I really, really don’t accept that kind of situation, you know, but we couldn’t do anything because they have guns.

There may be many Buddhist participating in the CDM. Are clergy belongs to all religions are participating or supporting the CDM?

Some monks also participated in this protest but not all of the monks. Supporters of the imprisoned monk Ashin Wirathu do not come out to protest. What is happening in Myanmar has nothing to do with religion. It is about how do we get back our democracy. So people know that this is about democracy not about religion/ We say that loud and clear.

And what does your family think about the demonstrations I mean, the older generation who are not on the street?

Wai Wai: My family, especially like my mum, she’s very supportive. She is supporting everybody, whoever comes out on the road, or at night my friends who took care of the road, or whoever needs some help.

So you are saying that you have to keep your roads safe from the military?

Wai Wai: Yes, we have to take care of our township and our road every night. So we take 10 people because one person cannot stay all night. So we have to do like schedule and something like that. We have to block the road. We cannot open the road like on a normal day. If somebody like the military comes you have to give a sound and one who is watching the road has to give a sound, you know? And this happens in every Township. And then all households start making sounds like banging pots and pans.

One night the person who gave the sound was killed by the military.

In fact, two persons were killed by the military that night.

You have been protesting for more than a month now. How does the campaign sustain itself? The military does not seem not going back, at least for now.

Wai Wai: Yes. It has been a long month. Some of the young people thought that because the military keeps killing the people and there will be an international outcry and pressure. And I really thank and appreciate all International actors who voiced their concerns. From the US to the UN to the EU. There have been strong statements supporting our democracy.

But whether they can help us or not we know that we have to support each other within the country so we will not give up. We need to motivate young people because sometimes people get upset about the future.

The way military is acting is very difficult to understand. Military treat us like terrorists, you know, what kind of terrorists are we? But we are unarmed peaceful people.

We are only showing our desire for democracy. And we want our elected government to manage the country and we want it, we still want our leaders, including innocent civilians to be released.

Great to see that people have hope and depend on their strength. How do you in a word call your action?

Wai Wai: In Burmese, there are many different meanings for our actions. Some call it a revolution. But in general, we call it  “protest”. Definitely, definitely, we want democracy. That is our destination.

The whole country is in a kind of lockdown. Right?

Even they do not leave dead bodies. They take them away now. It is a very tough and very rough situation.

That’s why whoever is participating in this CDM, is running away from home. And we don’t know where they are.

So finally I want to ask you that you know, no one wants to get killed. I personally have been in these kinds of situations. Do young people and their families are afraid that they will get killed?

Wai Wai: Definitely yes. We all are scared. We know that if they come for us and we evade arrest our family members may be arrested. Thinks like that make us scared.

There is no rule of law or any human rights in Myanmar today. So how can we be not afraid of our life?

Wai Wai: Of course, we, at first I would like to express my respect to all those people who are still participating and out on the road protesting. And we salute the government office workers who is participating in the CDM and I really want to thanks all of them. (

We really, really need international help. United Nations need to help us. Democratic countries need to support us. International human rights organizations need to show solidarity. We need motivation as well as financial help. We really really welcome international support. Right now we are not in a good shape but we will continue to come out on the streets because we want democracy.

A short clip from the interview.