We cannot and must not allow our Motherland to be dragged into another civil War, by a small group of extremists – CBK 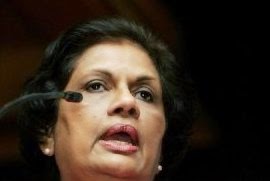 Statement by former  President  Chandrika B Kumaratunga.
I’m deeply concerned about the outbreak of communal violence and Anti- Muslim attacks that occurred in several areas of the country, in the past week. I’m saddened by the loss of precious lives, the displacement of families and the wanton destruction of property. My thoughts and prayers are with the families who have lost loved ones and their livelihoods.
I’m appalled by initial reports that the violence seems orchestrated and followed a public meeting and a provocative march by violent extremists who pursue their narrow, personal goals, in the name of Buddhism.
It’s a matter of great concern that the law enforcement authorities have failed to deal with the hate mongering and blatant violation of the Law for nearly 18 months.
Government connivance with communal violence in 1983 led the country to a terribly destructive war for 25 years. Since then, several governments of Sri Lanka led the military, the Police and the peoples of Lanka to defeat terrorism and separatism.
The present government played an essential role in finally bringing an end to war and terrorism.
We now have before us, an extraordinary opportunity for Progress and Prosperity by creating a Pluralist, Inclusive Democracy, giving to all our citizens, equal economic, socio-cultural and political opportunity. The freedom of belief and of expression is key elements of a free, democratic society and of a politically stable, economically prosperous State.
It is the duty of Government to protect the lives of every one of its citizens, to guarantee the rule of Law prevails for all alike. It is the sacred responsibility of the highest authorities of government to ensure this.
I say this, without hesitation, as I’m aware of how speedily my government successfully halted acts of provocation and communal violence, on several occasions, against Christian churches and also against Muslim persons and their property, which occurred in several Districts in the South and the East. Immediate and strong action resolved the issue.
In the name of the immense sacrifices made by our peoples for a quarter of a century ,during the ethnic conflict and the ensuing terrorism, I urge  that of the large number of leaders, organizations and individuals to call upon the government, especially its leaders, to take immediate action in every way possible, to bring a halt to this communal and religious violence, to institute an impartial inquiry into the incidents ,without delay and to direct the law enforcement authorities to take strict legal action against the instigators and perpetrators of this savage violence.
We cannot, we must not allow our Motherland to be dragged into another civil War, by a small group of extremists. The vast Majority of Sinhala Buddhists believes in the path of understanding, loving kindness, generosity and rationality.
We must all unitedly strive to eliminate this dangerous affliction of hatred towards the other communities and build an United Lanka, where Sinhala, Tamil, Muslim, Burgher, Buddhist, Hindu, Islamic and Christian peoples live in Harmony