In spite of the Central Bank announcing that “Gross Official Reserves increased to US$ 7.1 billion (provisional) by end 2013″, the Government intends to borrow US$ 1.5 billion this year from international financial sources.
External finances have been improving owing to increased export earnings, large amount of workers’ remittances and higher tourist earnings.
Despite these favourable developments, the Government continues to borrow mainly to meet this year’s large debt servicing obligations (loan repayments and interest costs). The gross external reserves cited by the Central Bank do not indicate the extent of funds available to meet short term financial needs. They do not allow for liabilities incurred in building the gross reserves.
Foreign debt has risen to levels when the debt servicing costs are a huge burden on the external finances. The Government has to borrow to service the large foreign debt incurred over the years. Further borrowing will increase the external debt and its debt servicing costs.

Increasing foreign debt
Total external debt expanded by a massive 13.8 per cent to reach US$ 28.4 billion at the end of 2012 from US$ 25 billion in 2011. At the end of 2013, foreign debt is likely to have increased to more than US$ 30 billion. In addition, private and state banks raised loans in international financial markets in 2012 and 2013. With further borrowing during this year, foreign debt is likely to reach about US$ 31 billion.
Most of the debt stock is from commercial sources. In 2012, commercial debt accounted for 55 per cent of total debt, while 45 per cent was from concessionary sources like the IMF, World Bank, ADB and foreign governments. In 2012, for the first time, the major portion of foreign debt was from commercial sources. This switch to commercial borrowing makes the increasing debt more risky. 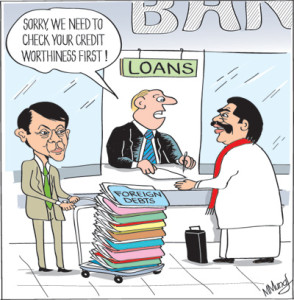 As foreign debt increases with increased foreign borrowing, the risk premium charged by foreign lenders goes up as the country’s credit worthiness declines. Moreover, when Government borrowing increases, private borrowers’ access to foreign capital markets becomes limited.
This trend is likely to continue as the country is not entitled to concessionary financing as it is now a low middle income country. Even more disadvantageous is that Sri Lanka has to borrow at high interest rates, much above LIBOR (London Inter-Bank Borrowing Rate) as the country’s credit ratings have gone down.

High interest rate borrowing
In addition, commercial banks raised US$ 973 million in 2012 by way of long-term foreign financing, including a US$ 500 million international bond issued by the Bank of Ceylon. In 2013, the National Savings Bank borrowed US$ 750 million at 8.72 per cent and the BoC borrowed US$ 1,000 million at a rate of 8.875 per cent, about 300 basis points higher than the last bond sale by the NSB.
These are very high rates of interest for international borrowing and reflect perceived credit risk rating. The DFCC restricted its borrowing to just US$ 100 million owing to high interest rates at which loans were offered. The Government has in addition borrowed rupee denominated debt from abroad at rates ranging from 11 to 13 per cent.

Debt burden
Borrowing at high rates increases foreign debt servicing costs due to both the increase in debt and the higher interest costs. At this rate of interest, principal and interest payments will double every eight years, and if GDP does not grow as fast as the debt, then the debt burden as a proportion of GDP will increase, making it more difficult to meet the country’s total external debt obligations.
The large amount of foreign borrowing, much of it at commercial interest rates, has resulted in a huge debt servicing cost that requires further borrowing to service debt and compounds the problem. It is, therefore, imperative that foreign debt is reduced so that the debt servicing costs are contained at manageable levels, so that the country does not run the risk of being caught up in a vicious debt trap.
Furthermore, when borrowed funds are invested in activities that have low returns and mostly confined to non-tradable activities, it becomes increasingly difficult to service the debt. In the final analysis, a country can pay off its debt only by generating trade surpluses.

Trade balance
It is essential to utilise the improvement in external finances to redeem debt rather than incur further foreign liabilities. The trade deficit had fallen to US$ 7.8 billion in the first 11 months of 2013 as exports exceeded US$ 1 billion in October and November. Since this uptrend is likely to continue into 2014, the pressure on the balance of payments of the last three years would be eased to some extent. With increased workers’ remittances and higher tourist earnings, the Central Bank estimates the overall balance of payments to be around US$ 700 million.

These improvements in the balance of payments should enable the Government to reduce foreign debt rather than increase it. It has an opportunity this year of redeeming debt rather than incurring further debt. To achieve this aggregate demand must be contained through monetary and fiscal measures.
However, monetary policies are not in the direction to curb private consumption and there are inadequate fiscal initiatives to reduce government spending that should be pruned to achieve an improvement in the trade balance as it has adverse impacts on the external finances by increasing intermediate and investment goods imports.

Bottom line
In the final analysis, loans have to generate returns higher than the interest paid and they must be generated in sectors that will help debt repayment. Long gestating and large infrastructure projects have to be financed from domestically generated long-term savings to avoid a foreign debt problem.
Todd Schneider, who headed the IMF mission in September last year, observed that “New external borrowings should be done with a close eye on sustainability and the need to ensure that investments generate the resources needed to service these obligations”.
Courtesy – Sunday Times