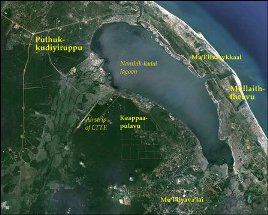 2,500 acres of land by the side of the Nanthik-kadal lagoon, comprising of the village Keappaa-pulavu and nearby jungle, where the last stages of the Vanni war was fought and prohibited weapons were allegedly used against the LTTE by the genocidal Sinhala military, is now permanently grabbed for use of the occupying military, news sources in Vanni said. The grabbed land in Mullaiththeevu district is divided between Sri Lanka’s Army and Air Force and the original villagers of 700 families detained from resettling are forced to accept lands away from their village. After the TESO conference last week, The Hindu, using an interview of Dr. Wikremabahu Karunaratne, tried to soft-pedal the issue of the annihilation of territorial sovereignty of the nation of Eezham Tamils as a mere “Move to gift Tamil resources to MNCs.”

The Hindu’s special correspondent on Tuesday cited Dr. Karunaratne saying that the Sinhalicisation process was a “farce” to gamble with poor Sinhalese masses for their support, but it was only a populist pretext for grabbing the resources of the Tamil people and selling these to alien powers, especially MNCs, without consulting the Tamil people.

According to Dr. Karunaratne cited by The Hindu, a separate Eelam is advisably not an immediate option since efforts to foster unity had not been exhausted. What kind of unity is anticipated by making Tamil civilians to accept living permanently with the genocidal Sinhala military that sucks them in every respect, questioned the political activists.

Dr Karunaratne was right in saying that a UN probe would not serve the purpose beyond a point, since the UN was run by global powers and Mr. Rajapaska had their support. What should be deduced is that only people’s action bringing in constrains to the interests of those who now back Rajapaksa and the Sri Lankan state could bring in justice. The Hindu feature invites Tamil Nadu to perform the role of convincing Sri Lanka supporters inside India, the activists further said.

The locality of Keappaapulavu and the former airstrip of the LTTE

The village Keappaa-pulavu is now completely grabbed for the use of SL military. The village has Nanthik-kadal lagoon on one side and the roads from Puthukkudiyiruppu to Mu’l’lyava’lai and to Oddusuddaan on the other sides.

The densest strip of forestland in the division is found near the village and that too has been grabbed.

The village and the forest strip located just outside of Mu’l’livaaykkaal, was a centre of activities during the war. The LTTE had an airstrip and other facilities in the forest. The underground accommodation now shown to Sinhala ‘tourists’ as the personal facility of the LTTE leader, Mr. Pirapaharan, is also located in the forest.

During the last months of the war the LTTE fighters destroyed a missile base of the SLA in the locality.

Even after clearing a part of Mu’l’livaaykkaal for resettlement, where the resettled few families are now treated like slaves by the Sinhala military, the Keappaa-pulavu area was completely prohibited for any entry or resettlement.

It is to retain this tract as the central base for the occupying military, many other adjacent parts of the Puthukkudiyiruppu division are not yet released, local sources said.

Last week, the villagers of Keappaa-pulavu, currently living in camps or with friends and relatives, conducted a special pooja at the Ka’n’nakai Amman temple at Vattaap-pazhai to get their village and lands back to them.

But the 591th division of the SL military and the SL Air Force have decided to permanently grab 2,500 acres of the area for their use. Permanent structures for the military are also being built in the area.

To hoodwink the people and the outside world, Colombo has started showcasing allotment of land for the people of the village in some other adjacent but remote part of the area.

On Friday, SL officials of Mullaiththeevu district secretariat went to allocate new lands for the villagers.

The secretariat officials are not prepared to officially confirm the on-going scheme.

The Sinhala military is engaged in large-scale and highly planned land grab in the other districts too: HSZ in Jaffna, Muzhangkaavil in Ki’linochchi, Kanakaraayan-ku’lam in Vavuniyaa, Channaar in Mannaar and now Keappaa-pulavu in Mullaiththeevu. Besides, there are several hundreds of other bases and camps.

Eezham Tamils have to indefinitely live side by side with the genocidal Sinhala military, if the ‘reconciliation’ agenda and internationalised LLRC implementation by Washington and New Delhi are tolerated, Tamil political activists said.

The Hindu citing Dr. Karunaratne that “the idea of self-determination is there and we can go for a referendum on these issues,” should not be a pre-emption to facilitate structural genocide through Sinhala militarisation and LLRC implementation, the activists further said.

After an earlier refusal, Dr. Karunaratne was given with Indian visa to participate the TESO conference when he announced to the media in advance on what he wanted to present at the conference and that was on upholding the LLRC implementation, a joint agenda of Washington and New Delhi.

The Eezham Tamil participants were not given with visa and were made either to announce cancellation saving embarrassment or to sulk and remain silent.