‘Victorious’ government and the defeated masses… 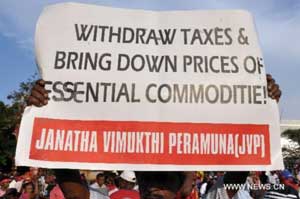 Vigitha Herath
Abortion is legally banned in Sri Lanka. Despite the ban, it is common knowledge that these illegal activities prevail in the country, under cover.
While some say that killing a child about to be born is a crime, others may argue that abortion is a woman’s right. Most of these abortions take place without the intervention of the government.

However, there is a process of abortion that the government carries out with its direct intervention. This is widely implemented in the sector of provincial councils. 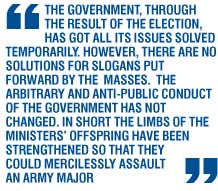 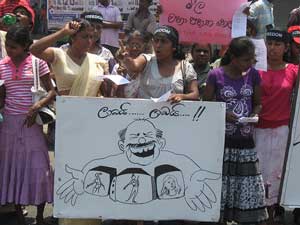 The preferential numbers of the ruling party candidates had been printed not only on the covers in which the hospitals issued drugs but also on photographs of ‘Kapilawasthu’ relics distributed among the devotees. One may reject them as tactics that had been immensely used in conventional election campaigns. However, they still bring results. Whatever a person’s personal views and experiences are, it is very difficult to avoid the persuasion of the ‘dominance dogma’ that is being built (using all forces and assets) during an election. A person may use his vote under such influence. 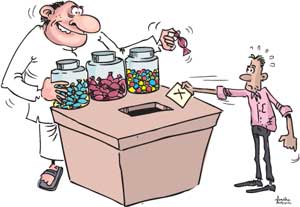 However, the conclusion is that the government has been ‘victorious’ at the Provincial Council elections. The government leaders would be stating something similar to Machiavelli’s teaching that “power is an end in itself, and whatever means are necessary for a prince to acquire and maintain political power are justified.”

Of course they would make these statements from places where the public would not hear. Hence, the government is briskly working to achieve goals of its ‘victory’. As their relatives have become winners of preferential votes the ministers are contemplating how to celebrate the victory. The vociferous ministers of the government are stating that the allegations against the government regarding fraud corruption ,stealing, thuggery and sex abuse, the education and health services are being rejected by them.’

The arrogant statements of ministers that the struggle carried out by the university teachers is a conspiracy and should be crushed are the results of election ‘achievements.’

The mandate given by the masses (power grabbed from the people) is being used against the masses. What it means is not only that the masses do not own any part of the victory but the slogans and challenges aimed at the government have temporarily subsided and the masses have been made to fall back. The government, through the result of the election, has got all its issues solved temporarily. However, there are no solutions for slogans put forward by the masses. The arbitrary and anti-public conduct of the government has not changed. In short the limbs of the ministers’ offspring have been strengthened so that they could mercilessly assault an Army Major.

As such, the masses will have to lift back their placards that were kept aside. Each passing day they will realize more and more that there is no path other than that of struggle to get their issues solved; that the election results do not represent their needs. In short they will come to realize that the respite in Hades’ kingdom has ended and there is no victory without a struggle.