Vavuniya, Sri Lanka: No home to call their own! 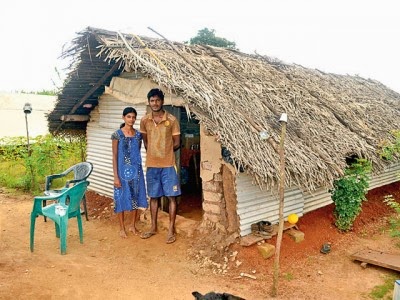 By Madhava Kulasooriya
The people of Vavuniya have lived through a brutal civil war, and had harboured hopes that they would be able to enhance their standard of living after the conclusion of the war. However, nearly five years post-war, the people live in extreme poverty with little hope for better standards in the immediate future.
The inhabitants of an area in Vavuniya claim that even though they were resettled and have been living in a village for over three years, government authorities have not taken any measures to provide the village with any of the basic facilities necessary to live in relative comfort.

The little huts in which the village folk live and call home, are nothing more than a small area of floor space covered by a thatched roof and tin walls.

Villagers neglected
“During rainy season it is impossible to live here. Our homes are made of polythene and tin sheets, and whenever there is a shower of rain, water pours into the house. Even though there have been numerous programmes and workshops for the development of relocated people in the Northern Province, none of those workshops have been of benefit to us. This is because we have not even been provided with any basic facility or service. Though several responsible officials of the Vavuniya District worked diligently to provide permanent housing schemes, electricity and basic infrastructure facilities to the people of many villages in the Vavuniya District, we have not received anything at all,” bemoaned K. Vinodan, a villager from Pulanaavur, Puravasankulama in Vavuniya.

He claimed that if the relevant authorities acted responsibly, the village people would not be in such a dilemma as they would have received permanent homes under the Indian Housing Scheme and the funds which were donated for the purpose of providing homes for the homeless.

In addition to the lack of housing facilities, the people are also bereft of electricity. Though electricity cables run right across the village, electricity is provided only to a military camp which is nearby, another villager, K. Shivakulugu said.

Facilities denied
She claimed that there were electricity cables running even right in front of her house and yet her house was not powered by that energy. She pointed out that if there were electricity transformers in the village, and if it was capable of providing power to a military camp, there is no reason for it to be incapable of providing electricity to the rest of the village as well. Shivakulugu further alleged that there was electricity in several other ‘resettlement villages’ which are yet to be inhabited; and if such was the case, she wanted to know as to why villages which are already populated were not granted the same facilities as unpopulated villages.

Speaking about roads and other facilities, Shivakulugu stated that the roads are in a pitiable state, and have not been restored for years. Meanwhile, toilet facilities for part of the village were provided by a non-governmental organization, while the other part of the village was left without even that facility, thanks to the incompetence of the government authorities, she said.

Recalling the past and the plight faced by the villagers during the civil war with the LTTE during 1990, she stated that it was impossible to continue to live in the village, and as a result of the trouble and harassment caused by the LTTE, many villagers opted to leave their homes and move elsewhere; some of the villagers took up residence in a refugee camp in Vavuniya, while the rest sought shelter with their relatives and family members in the area. They lived in this manner until 2010, at which point approximately 45 families were resettled in the village, Shivakulugu said.

Villagers’ issues remain unresolved
Even students face difficulties due to the lack of basic facilities. Most of them attend Poovarasankulama Vidyalaya,Vavuniya, situated approximately 14 kilometres away from the Vavuniya town, she said, and added the children had to travel that far everyday to receive an education.

Another villager G. Kanendran, stated that despite all possible authorities were being notified of their plight, nothing had been done to date. The Vavuniya District Secretary and local provincial politicians are among those who have been apprised of the situation they face, Kanendran said.

“The people of four villages in the Poovarasankulama Division have held protests in front of the Vavuniya District Secretary’s office last November, demanding a permanent solution to their housing problems. However, nothing has been done in this regard, to date. We even handed over a letter explaining our plight, but it has had no effect either,” he added.

When the people of the Poovarasankulama Division had approached the Vavuniya District Secretary, Bandula Harischandra, he had assured them that he would provide an immediate solution to their housing problem as well as address the other problems they are facing. However, the villagers said that they are yet to see any tangible resolution to their problems.
CT