Vasudeva Nanayakkara tells Judiciary to go to Hell! Who are you to say so? ask Sumanthiran 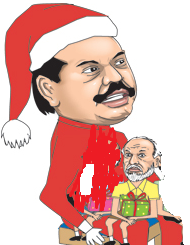