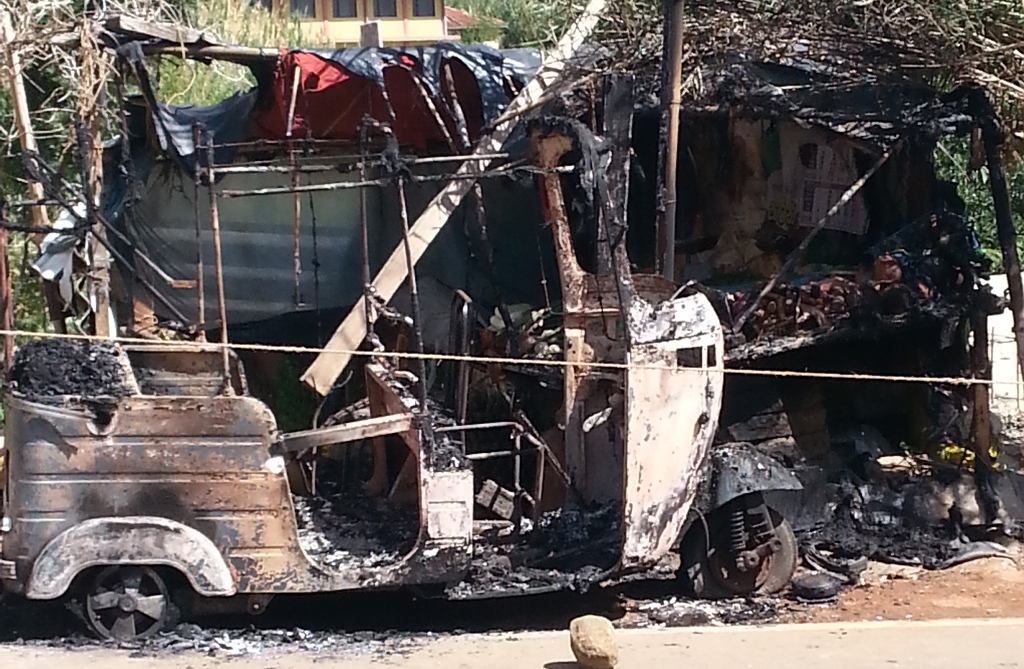 [Remains of a burned UNP election offcie in Uva]
BY RUKSHANA NANAYAKKARA-
The increase of violence running up to the Uva Provincial Council election is an ominous premonition. The bumpy start of democratic evolution since independence has generously chronicled the erosion of our democratic values since 1970s, and the election process since the 1980s has become an erratic cursor. Although developments in the last 10 years did not bring a sigh of relief, it did record a somewhat upward trend towards a peaceful voting process in the country. However, the Uva election process shatters our hopes indicating we are far from reaching a sustainable platue for our democratic future.

Cops turn blind eye to Ops in Uva…
Election monitors Peoples Action for Free and Fair Elections (PAFFREL), revealed that it had received more than 200 complaints of election law violations and election-related violence since 30 July. So far 158 of them have been confirmed. Campaign for Free and Fair Elections (CaFFE) also reports a similar number of election violation cases across the two districts in the Province. In addition to direct violent attack on individuals and property, the presence of organized groups in the region raises serious concerns about a healthy election environment. These groups are reportedly wandering in the Province in vehicles without registration numbers and some in vehicles with Western Province registration numbers.

This projection of power seemingly happens under the blessings of the law enforcement authorities. According to CaFFE, police in the region have done nothing to remove these vehicles from the area despite continuous allegations levelled against these mysterious vehicles and obvious violations of motor traffic regulations and election regulations. Arson attacks and intimidation apparently have taken place in the direct presence of the police. Overall the intentions of the violators are clear. They want to build up a climate of fear leading up to the elections.

The violence of Uva elections paints the story of not only present day corruption but also how the future will unravel. If predictions and hopes of Sri Lanka becoming a middle level middle income country are realized as expected, the levels of petty corruption may recede with it. Although far from perfection, according to recent surveys done by international organizations, Sri Lanka has marked a slight progress in reducing petty corruption in the public sector. But the collection of power within a few members of a family over the past few years has opened another perilous avenue for corruption. Grooming of power within a privileged clan is leading such power to be mobilized for the continuation of the same. The unprecedented scale of violence in the Uva election in the avenue of most recent election in Sri Lanka signifies what could result in a context of fear psychosis of this stronghold of power.

When oligarchy stifles democracy…
Is this the beginning of a slippery slope? The most recent Provincial Council election indicated a slight erosion of popularity of the present regime. Sinhala Buddhist extremism of the government makes it rather unpopular to its existing coalition partners. President Rajapaksa is gearing for another round of mandate seeking. The stakes are high. They are not in a position to give up the power. The on-going violence is a simple indication of the mentality and attitude of the present regime. Corruption is use of power for personal gain and rulers who continued to be in power for long period of time to mobilize their power for their existence beyond democratic norms and will of the people. Plenty of examples across the globe warrant limitation of this power.
The recent attempts of the Cambodia ruling party on dissent and anyone who ally with it indicate the unwillingness to give up power which accumulated a privileged class in the country since 1990s. The same extends to Uganda, Zimbabwe, Belarus, Syria, Azerbaijan and many places around the world. Sri Lanka President’s more than 10 years of rule now being added to the list of first 50 world longest ruling non-royal national leaders.

The increasing election violence indicates that any threat to this existence would not be tolerated. Democracy and people of this country are becoming the victims of this paranoia. The attempts of clamming down the civil society which operate within the space politics are a manifestation of this paranoia. It became more evident with the statement of the government’s that NGOs should not engage in voter education in the country and the ban of press conferences. It is an attempt of forcefully implanting one set of ideas in the minds of the people.