Uva Election: Masses have decided to chase away government – JVP 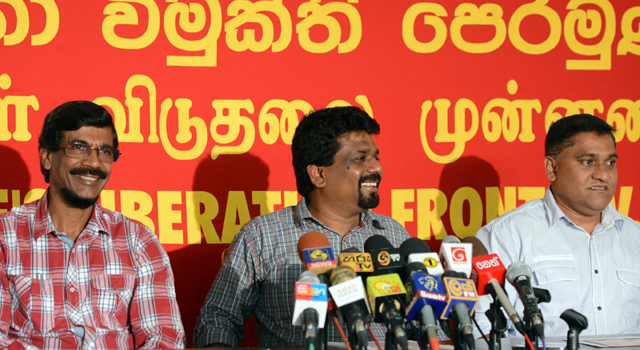 [JVP press con. on Uva election results]
The masses have already decided to chase away the present government at the next national election to be held says the Leader of the JVP Parliamentarian Anura Dissanayaka. He said this at a media conference held at the head office of the JVP at Pelawatta today (21st) afternoon. The General Secretary of the JVP Tilvin Silva and its Information Secretary Vijitha Herath were also present.

Speaking further Mr. Dissanayaka said, “The government had a definite objective in calling the Uva PC election. It is to use it to prepare the environment for the commencement of the next power era of Rajapaksa regime. The government is planning to advance the presidential election due in 2017 to the beginning of 2015. The Uva PC election is a political survey for this.

The government got the highest result at the 2009 PC election from Uva. It received a percentage of 81 from Monaragala and 67 from Badulla. The percentage for the province was 72. The government’s effort to repeat this performance before going for a presidential election has completely failed. State resources, state media and state ceremonies were massively used for the election campaign by the ruling party. Large funds were allocated for the Uva PC a month before it was dissolved. Also, goods from the bottle of arrack to ‘sil’ cloth were distributed as bribes. Every family in Monaragala was given Rs.2500 from public money until the day of the election.

This PC election marked the highest number of incidents of violence. Election monitors have received more than 500 complaints. Among the complaints were assaults, attacks, shooting, torching of election offices, intimidation and terrorizing. The UPFA organized only two rallies at Mahiyanganaya and Wallawaya in which the President participated. All other meetings were held as state ceremonies and opening ceremonies. They were organized using public money and state officials. Also, on the election day the state media was used to broadcast special programmes regarding Uva. The North-Western (Wayamba) election is considered as the election full of violence. The Uva PC election goes down in history as the election in which the most state resources were used.

The 81% vote percentage the UPFA polled at Monaragal District in 2009 has come down to 58% this time. Also, they have lost more than 19,000 votes. The main candidate for Monaragala District was a close relative of Rajapaksa family. The masses in Monaragala have given the family rule a good message by reducing the number of votes for its link. The 67% UPFA polled from Badulla District has come down to 47% this time. The government has lost more than 50,000 votes. UPFA has lost 69,000 votes from the whole district. When considering this result it indicates that the masses in Uva have given a definite sign that they are prepared to chase away this government.

Even when such an advantage exists the government has lost 21% of the votes. This is a political environment that causes a massive trouncing at a national election. This is the sign the masses in Uva have given the government. They have beaten all the efforts of the government.

When considering the performance of the JVP, we have been able to come out of the recession we underwent in the electoral front and improve our number of votes and seats at the last Western and Southern PC elections. We have been able to secure this victory at this election. In Badulla District we got only 9007 votes in 2009. It has increased to 20,625. The 5632 votes we received from Monaragala in 2009 has increased to 15,955. In Uva Province the number of votes we polled in 2009 was 14,639. It has increased to 36,580. The vote percentage that was 2.53 in 2009 has improved to 5.36%. Also, we have won a new seat at Monaragala and secured our seat at Badulla.

We, as the JVP, carried out a very strong election campaign. We visited every home and made the people aware. We explained the destruction the country is confronted with. When compared with other political parties we held a large number of meetings. A large number of people listened to our explanations and a large number of people are rallying with us. We also were able to commence a dialogue among the masses. We did take ‘Our Vision’ to the masses. We were able to achieve a result that goes beyond the results of this election. What we expect is not a mere change of government or change of individuals. We are guiding our politics for a social transformation. Our party that was built for a broad transformation doesn’t depend on the number of parliamentary seats or seats of any other council. We have a challenge that goes beyond that. We have achieved this result with dedication and sacrifice of our members but not by using state resources, state media and distributing food and drinks and other goods.

Also, state employees have acted as a decisive force that could change the ideology of the society. We have been able to get a good percentage of the postal votes the state employees used. We have received 11% from Monaragala and 10% from Badulla District. State employees are rallying around us as we have struggled against repressive acts carried out against them by the government and to protect their rights.