Uthayan attack investigated within 5 hours and Govt has found out it was a inside job! – TNA MP 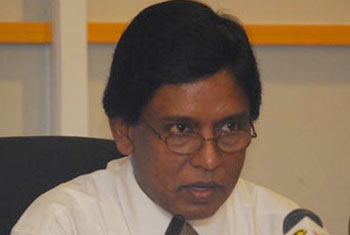 TNA MP and owner of Uthayan newspaper, E. Saravanapavan today rejected accusation claiming the torching of the newspaper’s main office in Jaffna was an ‘inside job’ staged to ‘tarnish the image of the government’.
Three gunmen stormed into the newspaper office this morning, threatened the employees and fired four shots, one narrowly missed a worker’s head.

The assailants opened fire at the computers as well as the printing machines before dousing them with petrol and setting fire, he said.

One of them held an AK-47 assault rifle and he kept watch near the gate, E. Saravanapavan told Ada Derana by telephone.

He stated that the government tells the international community that civil control prevails in Jaffna and that nobody is allowed to carry weapons except military personnel.

Then who came into the newspaper office with firearms, he questioned.

Responding to accusations from the government that the attack was an “inside job,” the Jaffna District MP stated that there are so many crimes that have gone unsolved in the country.

But when the Uthayan office is attacked at 4.45am, investigations are completed within 5 hours and the director general of the Media Centre for National Security, Lakshman Hulugalla issues a statement at 10.00am claiming the incident was an ‘inside job to tarnish the image of the government,’ he said.

“Does Lakshman Hulugalla have no shame at all?” he inquired.

Saravanapavan stated that the Director General of the MCNS has been fooled and that now he is attempting to fool the masses.

In any other country the military commander would resign after such as incident, but not in Sri Lanka, he stressed.

Today’s incident is the latest in a series of attacks targeting the Jaffna-based newspaper and its employees and comes just over a week after the Uthayan Killinochchi office was attacked by an armed group.

Saravanapavan stated that continues calls for security for their main office in Jaffna had gone unheard.

“Maybe they thought we will give security after attacking this one too.”

He stated that attacks are being carried out continuously, there is no security in the country and there is no trust. Therefore we will seek the assistance of the international community and Non-Governmental Organizations, he said.

“How can a government, which is unable to protect a media institution, protect the people of the country?” he inquired.
– Ada Derana