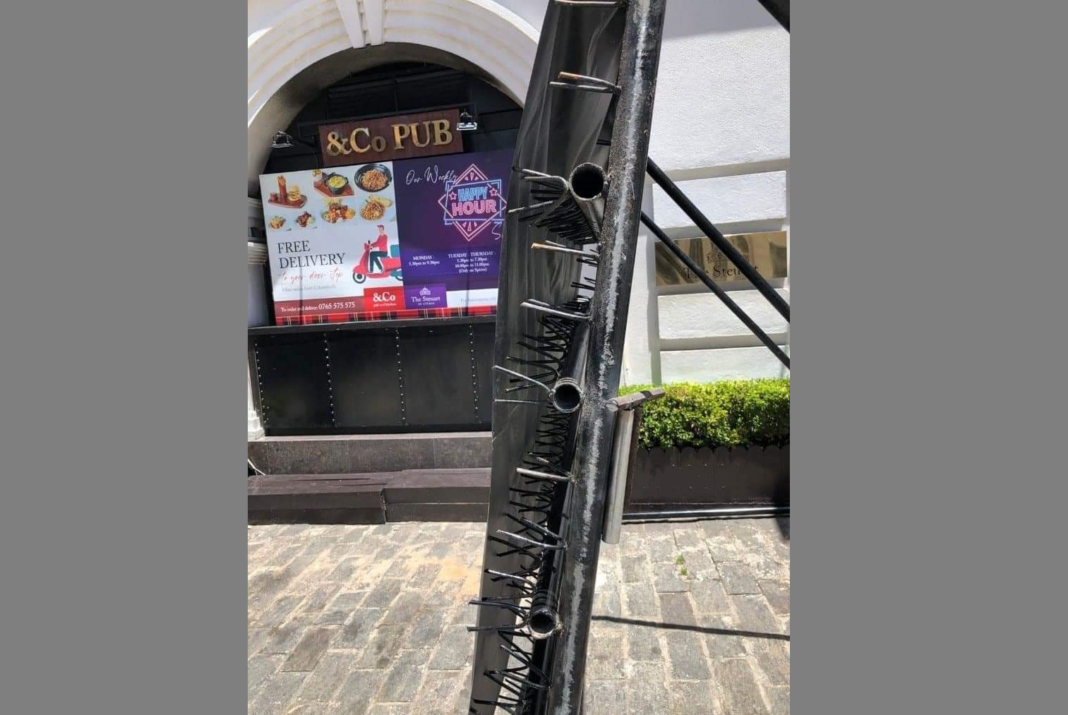 Lawyers’ Forum for the People Convenor Attorney Senaka Perera has filed a Fundamental Rights (FR) petition at the Supreme Court (SC) on 5th April , stating that Inspector General of Police (IGP) Chandana D. Wickramaratne has violated the fundamental rights of protestors with the use of spiked barricades to prevent protests.

Since the Police are required to use minimum force to disperse public protests, it is unclear as to which provisions were used under the Police Ordinance to employ “lethal barricades”.

Hidden spiked barriers were used on 24 April when the Inter-University Students’ Federation marched from Colombo Fort to “GotaGoGama” at Galle Face Green.

Bringing such barricades for civil protests shows the clear intention of torture where protestors are unarmed civilians, and that peaceful public demonstrations should not be suppressed by brutal and excessive force, where the result will be torture, cruel, inhuman, degrading treatment, or punishment at the hands of state officials.

Thus, the petitioner has called for the SC to declare that fundamental rights were violated and for the court to call for a report from the IGP about the use of such barricades.

(With inputs from The Morning)

The petition in full:

TO: HIS LORDSHIP THE CHIEF JUSTICE AND THE HONORABLE JUDGES OF THE SUPREME COURT OF THE DEMOCRATIC SOCIALIST REPUBLIC SRI LANKA.

The Petition of the Petitioner above named appearing by Attorney-at-Law Prabhoda Rathnayake, states as follows:
Application No: SC/ FR/

THE PETITIONER:
1. The Petitioner states that he is an Attorney-at-Law and a citizen of Sri Lanka and 53 years of age, a member of the Bar Association Sri Lanka, and a member of a Lawyers group called “Lawyers Forum For The People”.
(In proof of the same, a copy of the National Identity Card of the Petitioner is attached herewith marked as “P-1”, and Bar Association Identity card is attached herewith marked as “P-1A”, pleaded as part and parcel to this application.)

Violation of Fundamental Rights under the Constitutional Provision
37. Petitionerstatesthat the above-mentioned circumstances give rise to a reasonable apprehension regarding an imminent infringement of the petitioner’s right to freedom from torture by Article 11, right to equality by Article 12(1), and 14 (1) (a) and (b) and of the Constitution of Democratic Socialist Republic of Sri Lanka.
38. Petitioner states that considering the above facts stipulate in this application, there is an infringement or imminent infringement by the 1st Respondent under Article 11, 12(1), 14 (1) a and (b) of the Constitution.
39. Petitioner states that he has not invoked the jurisdiction of Your Lordships’ Court in this regard previously.
WHEREFORE the Petitioner humbly prays to Your Lordships to,
(a) Grant leave to proceed.
(b) Declare that the action of the 1st Respondent has violated the Petitioners Fundamental
Rights guaranteed under the Articles of 11, 12(1), 14(1) a and b
(c) Order the Registrar of the Supreme Court to call a report from the Inspector General of
Police on using barricades unsuitable and harmful to public and police standards that they
use to disperse and prevent the public from entering certain areas.
(d) Grant an Interim relief against the 1st Respondent to refrain from using the above-described lethal barricades or any similar harmful and inhuman barricades to prevent the public from entering premises and order the 1st Respondent to follow standards that are not harmful.
(e) Grant Rupees Rs. 25,000,000.00/= as compensation for the 1st Respondent.
(f) Grant such other and further relief as to Your Lordships’ Court shall deem fit.

Attorney-at-Law for the Petitioner