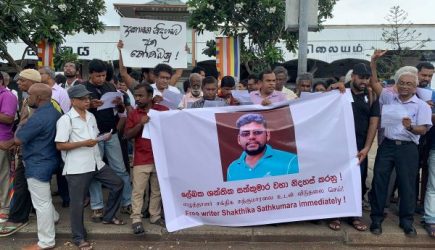 A. FREEDOM OF EXPRESSION, INCLUDING FOR THE PRESS

The constitution provides for freedom of expression, including for the press, and the government generally respected this right. An independent press, an effective judiciary, and a functioning democratic political system combined to promote freedom of expression, including for the press. According to UN and civil society reports, intelligence operatives conducted domestic surveillance operations and harassed or intimidated members of civil society. During the emergency, following the April 21 attacks, the government banned face coverings such as the burqa, niqab, and full-face helmets, citing national security and public safety concerns. The ban on face coverings was briefly lifted when the emergency regulation lapsed; however, in late August, the cabinet passed legislation permanently banning the burqa, the niqab, and similar face coverings, after consultation with the Muslim community.

Freedom of Expression: Authorities restricted hate speech, including insult to religion or religious beliefs through the police ordinance and penal code. The government requested media stations and outlets to refrain from featuring hate speech in their news items and segments.

In April Kurunegala police arrested Shakthika Sathkumara, a 33-year-old novelist, under the ICCPR law. His short story, “Ardha,” which reportedly dealt with homosexuality and child sexual abuse in a Buddhist monastery, angered members of the country’s Buddhist clergy. He was released on bail in August after being remanded for four months. On July 29, Amnesty International declared Sathkumara a prisoner of conscience. At his criminal hearing on December 10, the court granted the government’s request for a continuance in the case until May 2020. His fundamental rights petition challenging the constitutionality of his arrest was continued until June 2020.

Press and Media, Including Online Media: Independent media were active and expressed a wide variety of views. Journalists in the Tamil-majority North and East, however, reported harassment, intimidation, and interference from the security sector when reporting on sensitive issues related to the civil war or its aftermath. They reported the military contacted them to request copies of photographs, lists of attendees at events, and names of sources from articles. They also reported the military directly requested that journalists refrain from reporting on sensitive events, such as Tamil war memorials or land occupation protests, and that they feared repercussions if they did not cooperate.

In May, after communal violence following the Easter Sunday attacks of April 21, the HRCSL issued guidelines that called for all electronic media institutions to exercise sensitivity when broadcasting news due to concerns over the Muslim community being unreasonably subject to unsubstantiated suspicion and disrespect.

On September 9, then president Sirisena brought the state television Sri Lanka Rupavahini Corporation under the purview of the Ministry of Defense. The Working Journalists Association of Sri Lanka and the Free Media Movement strongly condemned the decision. Two fundamental rights petitions, one filed by a civil society activist and one filed by a member of parliament, were pending before the Supreme Court.

Violence and Harassment: There were reports of harassment and intimidation of journalists when covering sensitive issues.

On April 20, police arrested and released on bail Shanmugam Thavaseelan, a correspondent of the Tamil-language newspaper the Guardian, following a complaint filed by the navy stating the journalist, who was covering a disappearances protest, assaulted and caused injury to a navy officer attached to the ‘Gotabaya’ Camp in Mullaitivu. Charges reportedly were that he had threatened and photographed protesters at an earlier disappearances rally.

Reporters Without Borders (RSF), in a June statement, expressed alarm over a resurgence in police attacks on Tamil journalists and urged authorities to ensure that police cease the harassment of reporters. On May 27, Tamil daily Virakesari journalist Kanapathipillai Kumanan, who was covering a dispute between Hindu and Buddhist temples, was physically assaulted and verbally abused by the officer in charge of the Kokkilai police station. According to RSF, the May 27 violence against the reporter was the third reported attack on a journalist of Tamil origin during the year.

Censorship or Content Restrictions: On several occasions print and electronic media journalists noted they self-censored stories that criticized the president or his family. These journalists said they had received direct calls from supporters of the government asking them to refrain from reporting anything that reflected negatively on the ruling party or opposition politicians.

There were no credible reports that the government monitored private online communications without appropriate legal authority. The government placed limited restrictions on websites it deemed pornographic. In the aftermath of the Easter Sunday attacks, the government imposed a temporary ban on several social media platforms, including Facebook, WhatsApp, and Instagram. The nine-day ban on social media was briefly reimposed May 13 after anti-Muslim riots.

State university officials allegedly attempted to prevent professors and university students from criticizing government officials. The government interfered with university appointments and credentialing of individuals based on legal activities and political expression.

On November 9, the Jaffna University leadership endorsed the September 27 decision of the University Grants Commission of Sri Lanka (UGC) to debar K. Guruparan, the head of the Department of Law, from legal practice. Leaked letters from the Ministry of Defense to the UGC showed that Guruparan was debarred for pursuing habeas corpus cases filed in 2017 by three families regarding the disappearance of 26 youths in Jaffna allegedly involving the military. Plainclothes military intelligence personnel travelling with Attorney General Department representatives threatened the lawyers and families outside of the court.

In May the UGC removed the university’s vice chancellor, Jaffna Ratnam Wigneswaran, without cause or an inquiry. An affidavit in response to a fundamental rights petition filed by the chairman of the UGC at the Supreme Court showed that the removal was due to a complaint from the Directorate of Military Intelligence of the Army regarding Wigneswaran’s participation in an event called Thamil Amutham, where a reconstructed memorial monument carrying Tamil nationalist proclamations was unveiled within the university premises.

The law provides for the freedoms of peaceful assembly and association. The government restricted these rights in a limited number of cases.

At the conclusion of his visit to the country in July, UN Special Rapporteur on the Rights of Freedom of Association and Peaceful Assembly Clement Nyaletsossi Voule observed that authorities applied laws in discriminatory ways, with Tamil protests and gatherings in the North and East disproportionately facing crackdowns. Although he noted that the country had a comprehensive legal framework governing the right to freedom of peaceful assembly, it was “scattered in different sets of laws and regulations which seem to be interchangeably enforced.”

The law provides for freedom of peaceful assembly, and the government generally respected this right. The constitution stipulates that the freedom of assembly may be restricted in the interest of religious harmony, national security, public order, or the protection of public health or morality. It also may be restricted in the interest of securing due recognition and respect for the rights and freedoms of others, or in the interest of meeting the just requirements of the general welfare of a democratic society. Under Police Ordinance Article 77(1), protesters must seek permission from the local police before holding a protest. The emergency regulations in force from April 22 to August 23, following the Easter Sunday attacks, granted the security services extensive powers to detain and question suspects without court orders for up to 90 days. Under the emergency, the government instituted nighttime curfews and curtailed freedom of movement, and it permitted the president to ban public assembly.

The law provides for freedom of association but criminalizes association with or membership in banned organizations. Christian groups and churches reported that some authorities classified worship activities as “unauthorized gatherings” and pressured them to end these activities. According to the groups, authorities sometimes justified their actions, stating the groups were not registered with the government, although no law or regulation specifically requires such registration.