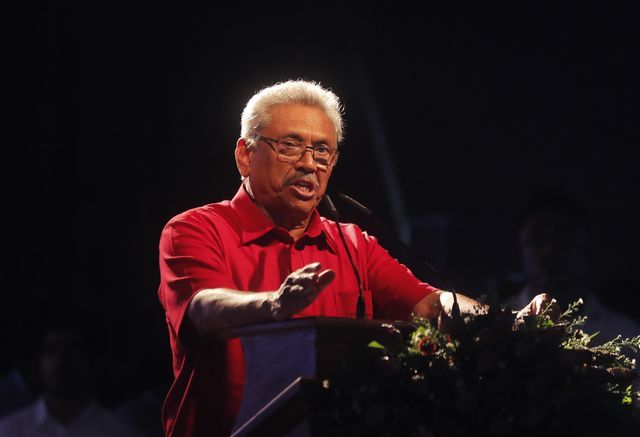 (K. Ratnayake/WSWS) US Deputy Assistant Secretary of State for South and Central Asian Affairs Alice G. Wells delivered a letter from President Donald Trump to President Gotabhaya Rajapakse during a one-day trip to Sri Lanka last Wednesday. The letter, according to the media, emphasised the White House’s “commitment and interest in furthering and deepening [its] partnership” with the island nation.

Wells held discussions with President Rajapakse and his brother, Prime Minister Mahinda Rajapakse, as well as Foreign Minister Dinesh Gunawardena, Tamil National Alliance chiefs R. Sambandan and M. A. Sumanthiran, and “civil society” leaders. Wells was accompanied by Liza Curtis, the Senior Director for South and Central Asia on the US National Security Council and Aliana Teplitz, the US ambassador to Colombo.

These high-level visits underscore the increasing rivalry over influence in the Indian Ocean region, primarily between the US and India, Washington’s key ally in South Asia, on one hand, and China and Russia, on the other. Strategically-located, Sri Lanka straddles important Indian Ocean sea lanes. In its attempts to maintain world hegemony, the US is deepening its military buildup and trade war measures against China.

Washington’s concerns over Sri Lanka have deepened with Rajapaske’s election as president and his appointment of his brother, a former president, as prime minister. The US considers both men to be pro-China.

While the US previously backed Mahinda Rajapakse’s anti-democratic government and its brutal war against the separatist Liberation Tigers of Tamil Eelam (LTTE), Washington was hostile to Colombo’s close relations with China. In late 2014, Washington initiated a regime-change operation to remove Mahinda Rajapakse, who was ousted in the January 2015 elections and replaced by Maithripala Sirisena as a pro-US president.

Wells told the media that she discussed with Gotabhaya Rajapakse “a wider and safer Indo-Pacific region [and] other issues of mutual interest.” The US wanted to strengthen ties by “expanding cooperation on economy and trade, counter-terrorism, security, military-to-military engagements, transitional justice and human rights.” These are code-words to justify the increasing build-up of US military forces across the region.

According to media reports, Wells reiterated Washington’s opposition to Beijing’s influence in Sri Lanka. She voiced concerns about Chinese investments and denounced the Hambantota Port agreement as “unsuccessful and an injustice to the Sri Lankan people.” In 2018, Sirisena’s government signed over Hambantota Port to a Chinese company in a 99-year lease as part of a deal to phase-out massive loans from Chinese banks for the facility’s construction.

Wells’ message from Trump was clear. Washington will not tolerate any weakening of the military and political relations it built-up over four years under Sirisena.

Wells praised increasing US-Sri Lanka military cooperation and hailed last year’s 18-ship US visit and the ever-closer integration of the Sri Lankan military into the US Pacific Command.

Washington is pushing for a renewal of the Status of Forces Agreement (SOFA) it secured with Sri Lanka in 1995, but with new provisions. The new clauses would permit American military bases and provide free access and immunity for all US forces operating in Sri Lanka. The Trump administration also wants Colombo to sign the Millennium Challenge Corporation (MCC) agreement, a US foreign policy aid deal.

During the recent presidential elections, Rajapakse’s Sri Lanka Podujana Peramuna criticised the MCC and SOFA in an attempt to capitalise on popular anti-imperialist sentiment. But once Rajapakse took office, he established a special body to assess the MCC’s “merits and demerits.”

Wells thanked Rajapakse for setting up this review committee but asked for an early response to its findings. She said “any concerns” about the SOFA could be discussed after the Sri Lankan parliamentary elections, due to be held in about four months.

The US, Wells warned, “is Sri Lanka’s largest export market and this was a partnership beneficial to both the countries.” She told the media that she discussed Colombo’s commitment to the UN Human Rights Council, the return of land seized during the war with the LTTE, the provision of information to relatives of missing individuals, and concerns by Tamils and other minorities and opposition parties over accountability.

This is a thinly-veiled threat that numerous issues can be exploited to force Sri Lanka to toe the US line. The Obama administration cynically used human rights violations by Mahinda Rajapakse’s regime to pressure Colombo to distance itself from Beijing.

A day earlier, Chinese Foreign Minister Wang had met with the Sri Lankan president, telling him that Beijing’s attitude toward Sri Lanka had always been consistent and that China would continue to be a “reliable” friend.

“As Sri Lanka’s strategic partner, China will continue to stand by Sri Lanka’s interests,” Wang declared. “We will not allow any outside influences to interfere with matters that are essentially internal concerns of Sri Lanka.” Wang did not name the “outside influences,” but clearly was referring to the US and India, which are seeking to scuttle Colombo’s relations with China.

President Rajapakse, who is due to visit China early next month, responded to Wang’s remarks by declaring that he was “an admirer of President Xi Jinping” and “followed his speeches and statements closely.”

Wang indicated that China would offer financial help, including the phasing-out of debt repayments, and “meet with necessary parties that can help Sri Lanka in the areas of technology, tourism, infrastructure and other related fields.”

Russian Foreign Minister Lavrov met with Gunawardena, his counterpart, and voiced his readiness to strengthen relations with Sri Lanka. Lavrov said Russia would “provide the Sri Lankan forces with all the weapons they need for security” and wanted to boost annual bilateral trade—currently $US400 million—to $700 million.

Gotabhaya Rajapakse, who has rapidly elevated key military figures into his administration, demagogically claims that he will maintain a “neutral foreign policy.” But under conditions of intensifying great power rivalry, the whole Indian sub-continent is being sucked into a geopolitical maelstrom and the danger of a catastrophic war between the nuclear-armed US and China.