“US Embassy In Colombo Was Behind Anti-Muslim Violence” — Editor, Gota’s War 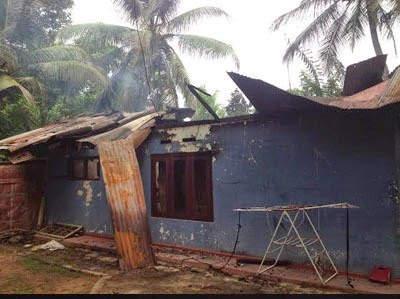 Veteran political commentator C.A.Chandraprema’s analysis of the Aluthgama clash has given rise to the speculation that the US Embassy in Colombo was behind the whole incident and they exactly knew what was happening in Aluthgama! “The US Embassy should explain to the world how the BBS including the thug Gnanasara were given visas for a tour of the USA about a year ago, long after they had begun this anti-Muslim hate campaign. By the time they went to the USA, they had begun surrounding Muslim business houses, the attack on Fashion Bug in Pepiliyana had taken place and the BBS had declared themselves to be ‘unofficial policemen’ and had begun this process of taking the law into their own hands.
Yet the US embassy gave them visas in a situation where even prominent, highly respectable Sri Lankans have difficulties in obtaining visas to go to the USA,” Chandraprema said in his article which was appeared in ‘The Sunday Island’.
Chandraprema also says,
“When this writer logged onto the Colombo US Embassy website at 8.30pm on Friday June 20, we found a statement issued on 16 June 2014 which went as follows: “The U.S.  Embassy condemns the violence that has spread over the weekend in Alutgama and Beruwela. We urge the government to ensure that order is preserved and the lives of all citizens, places of worship, and property are protected.   We urge the authorities to investigate these attacks and bring those responsible to justice. We also urge all sides to refrain from violence, exercise restraint, and respect the rule of law.”
Right below that statement on the web page was a photograph reproduced on this page, of Gotabhaya Rajapaksa with Galagodaatte Gnanasara and other BBS monks. The photograph was captioned “President Mahindha Rajapaksha’s brother Gotabhaya Rajapaksha with Sri Lankan terrorist Bodu Bala Sena”  (See: http://srilanka.usembassy.gov/pr-16june14.html)
The photograph appeared in the comments section of the page and the embassy may trot out the excuse that this photograph was a part of a comment posted by an outsider.  But the administrator of the website has control over what appears in the comments. This comment and photograph had been posted days earlier and remained on the webpage prominently below the US Embassy statement up to Saturday till we went to print. This is clearly a part of the US propaganda war against Sri Lanka. It is true that Gotabhaya was
photographed with these monks. But that was on one single occasion at a public function organized by Ven Kirama Wimalajothi. He has never been seen with these monks before or after that single instance.  Ven Kirama Wimalajothi, a highly respected monk, had the misfortune to get entangled with the Bodu Bala Sena in the beginning. He has not been seen with the BBS for well over a year now and in the wake of the Alutgama riots, he broke his silence to tell the press that he has no control over the BBS and that he does not approve of Gnanasara’s manner of speaking or his deeds. Despite that, this photograph of Gotabhaya with the BBS monks has been posted on the American Embassy website and the administrator has not taken it down.”
Asian Mirror also learnt that at the last cabinet meeting which was held at the Temple Trees, President Mahinda Rajapaksa had told his Ministers that he had credible information to prove that the clash occurred in Aluthgama, Beruwala and Dharga Town was part of an international conspiracy.