US Congressman calls for international probe into Lankan war 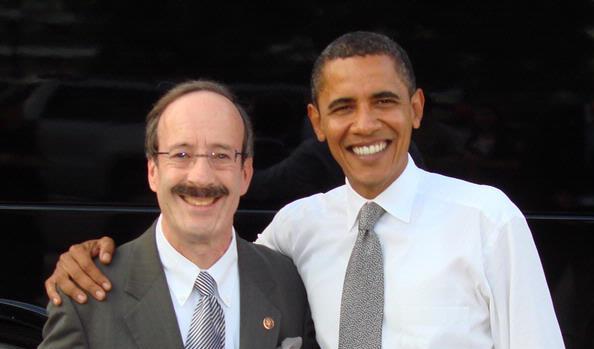 Eliot Engel the top Democrat on the US House Foreign Affairs Committee, has written to the U.S. Secretary of State John Kerry expressing serious concern regarding the deterioration of democracy and the lack of progress on reconciliation and accountability in Sri Lanka.
Citing indications that the Government of Sri Lanka appears unwilling to implement the recommendations of Sri Lanka’s own Lessons Learnt and Reconciliation Commission, Ranking Member Engel write to Kerry that now is the time for the State Department to support calls for an Independent International Investigation into allegations of war crimes in Sri Lanka.

I am writing to express my concern about the continued erosion of democracy in Sri Lanka and to urge you to call for an independent international investigation into allegations of war crimes by both the Government of Sri Lanka and the terrorist group, the Liberation Tigers of Tamil Eelam (LTTE), during their final battles.

In the spring of 2009, when the Sri Lankan government defeated the LTTE, many believed the victory would pave the way not only for reconciliation between Sri Lanka’s ethnic groups, but also for a strengthened democracy and greater economic development. But the government has not built upon the peace dividend. Instead, it has used the space to consolidate its power, and to remove some of the checks and balances that are the hallmarks of true democracy. Four years later, rule of law is endangered, media freedom and freedom of speech are under attack, and reconciliation seems even more distant than it did during the long years of conflict.

While certainly the government should be applauded for some of its efforts at rehabilitation and reconstruction in the northern parts of the country, it has made little real progress in addressing the conflict’s underlying issues, or in answering questions of accountability that must be addressed in order to achieve lasting reconciliation and peace in the country.

In fact, the Government’s post-war actions in this direction have all been significantly influenced by the international community. One such example: in May 2010, the government established a Lessons Learnt and Reconciliation Commission (LLRC), partly in response to international pressure over the deaths of an estimated 40,000 civilians at the war’s conclusion. The Sri Lankan Government presented the LLRC as evidence of its commitment to accountability, and argued that the LLRC review precluded the need for other processes on an international level. However, the LLRC had a limited mandate: it examined only the period 2002-2009 and had unclear investigative powers. Critics said it was neither transparent nor impartial.

Nonetheless, even the flawed process of the LLRC review acknowledged important events and grievances that have contributed to decades of political violence and civil war in Sri Lanka. The final LLRC report makes constructive recommendations on a wide range of issues, including the need to credibly investigate widespread allegations of extrajudicial killings and enforced disappearances; demilitarization of the north and the country as a whole; the importance of a political settlement for minorities, with meaningful devolution of power; the protection of the right to freedom of expression for all, including the enactment of a right to information law; and the enactment of rule of law reforms. The report also acknowledged the disproportionate impact of the conflict and its aftermath on women and children.

I commend the leading role the State Department played last March with the passage of the UN Human Rights Council Resolution calling for the Government of Sri Lanka to implement the LLRC’s recommendations. Unfortunately, almost a year has gone by since that resolution passed and the Government has failed to take it up. Its National Action Plan addresses less than a third of the LLRC recommendations, a fact conveniently left out of government responses to international criticism.

The lack of accountability in this instance sets a dangerous pattern, in fact, for the country as a whole. The deterioration of democracy in Sri Lanka includes a 2010 amendment to Sri Lanka’s constitution, hurriedly passed by its Parliament, that removed the two-term limit for the President, provided him legal immunity, and gave him the final say in appointments to the civil service, the judiciary, and the police. Urban Development now comes under the Defence Ministry. And earlier this year, Parliament impeached Chief Justice Shirani Bandaranayake, even though the Supreme Court had deemed that move unconstitutional.

As Assistant Secretary of State for South and Central Asia Robert O. Blake has said, “International mechanisms can become appropriate in cases where states are either unable or unwilling to meet their obligations.” The State Department’s April 2012 report to Congress on Sri Lanka acknowledged that no one has been held to account since the publication of the LLRC. In February, the UN High Commissioner for Human Rights issued a strong report questioning the government’s commitment to follow through on the recommendations of the LLRC and urged Sri Lankan authorities to permit international experts to probe allegations of serious human rights violations. I agree with the Commissioner. It is time the U.S. join the call for an independent international investigation.

Secretary Kerry, in a report issued by your staff during your tenure as chairman of the Senate Foreign Relations Committee, the authors wrote that the war in Sri Lanka was over, but that the underlying conflict still simmered. Unfortunately, this remains true. I look forward to working with you and the Department to support efforts to address these underlying conflicts.