US asked SL to use cluster bombs against Tigers 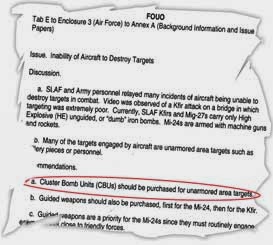 Shamindra Ferdinando
Even though the US recommended that the Sri Lankan government swiftly acquire cluster bombs to target the LTTE, the country never felt the need to do so, an authoritative official told The Island.
The US made the recommendation in the wake of the Oslo arranged Ceasefire Agreement (CFA) between the then Premier Ranil Wickreme-singhe and LTTE leader Velupillai Prabhakaran. It was among a series of recommendations made to the Sri Lanka Army, Sri Lanka Navy and Sri Lanka Air Force to strengthen their capabilities during the CFA.

Although Sri Lanka hadn’t been signatory to an international convention that prohibited the use of cluster bombs, the government refrained from acquiring the capability in spite of US recommendations, he said. Asked whether Sri Lanka had the required ability to deliver such munitions, the official said the Israeli built Kfirs, Russian MiG 27s and Chinese F7s were equipped to deliver them.

The government was responding to a call for an international war crimes probe by Bishop of Mannar Rev. Rayappu Joseph and Bishop of Jaffna Rev. Thomas Saundar-anayagam to find out whether government forces had used cluster munitions and chemical weapons in populated areas during eelam war IV. The call was made during a meeting with Stephen J. Rapp, ambassador-at-large with the Office of Global Criminal Justice of the United States on Wednesday.

The recommendation that the Sri Lanka Air Force (SLAF) acquire Cluster Bomb Units (CBUs) for ‘unarmoured area targets’ was made by USPACOM (United States Pacific Command) assessment team following a study conducted during Sept 12-2002 to Oct 24, 2002. USPACOM was acting on the instructions of the Department of Defence in the wake of Prime Minister Wickremesinghe seeking the intervention of US President George W. Bush.

The US advice was meant to prepare the armed forces to face any eventuality in case of the Norwegian peace initiative coming a cropper.

Having closely studied the capabilities as well as the weaknesses of the SLAF, the US suggested that the service deploy CBUs, guided weapons for Russian Mi-24 helicopter gunships and Kfirs, multi-role combat aircraft in service since January 1996. The US stressed that guided weapons were necessary as they had to engage LTTE targets situated close to friendly forces.

Military sources said that one-time AP Bureau Chief in Colombo Ravi Nessman alleged the deployment of cluster bombs on the basis of a statement attributed to Alan Poston, a UNDP technical advisor supervising mine clearing operations in the former war zone. The New Delhi based Nessman had been AP Bureau Chief for South Asia at the time the allegation was made. The then Army Commander Lt. Gen. Jagath Jayasuriya told The Island that Poston had failed to substantiate his claim though the army requested him to furnish whatever evidence he could provide.

When confronted, Poston admitted that he had never informed the SLA of the recovery.

Army headquarters emphasised that the SLA and other privately funded groups engaged in mine clearing operations in the Northern Province had never come across evidence of cluster bombs. Those injured on the Vanni east front during the final phase of the offensive were brought under the supervision of the ICRC to Pulmoddai, where Indian military/medical personnel treated them.

Air Chief Marshal Roshan Goonetileke yesterday told The Island that the SLAF never used cluster bombs, though it was in a position to launch attacks.IS