US and Japan eye eastern Sri Lankan port of Trincomalee 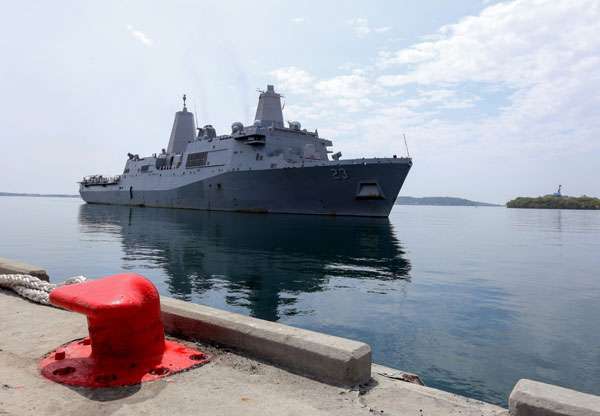 Colombo, August 25: The United States and Japan have both cast their eyes on the Eastern Sri Lankan port of Trincomalee to counterbalance the presence of the Chinese in Hambantota in the South and Colombo in the West and its growing clout around the Bay of Bengal.

The Trincomalee harbor was meant to be a major Allied logistics base. By the end of the 1930s, the British had built 101 giant oil tanks to supply ships and aircraft. During World War II, on April 9, 1942, a Japanese Kamikaze (suicide) aircraft had crashed into one of the tanks which was reduced to a molten mass. More than 700 civilians were killed in that air raid.

In the 2000s the Sri Lankan government handed over the tanks to the Indian Oil Corporation to be used in collaboration with the Ceylon Petroleum Corporation. However only some tanks were refurbished and are now being used.

But India has plans to refurbish more tanks to serve an emerging market in the Bay of Bengal area and South East Asia. Japan has the same intention. But the US appears to be more interested in the strategic value of the Trincomalee port, vis-à-vis an increasingly belligerent China.

The Sri Lankan government now wants to get Japanese and Indian help to develop the Trincomalee harbor also as it is a natural harbor. The government wants to develop its hinterland as an Economic Zone.

The US and Japanese navies have sent ships to the harbor on goodwill visits and India has stationed a naval officer there. A Japanese naval Destroyer was in the Trincomalee harbor when the Japanese Defense Minister Itsunori Onodera was visiting it.

Close on the heels of the visit of the Japanese Defense Minister Onodera to Trincomalee, the USS Amphibious Transport Dock USS Anchorage (LPD 23),along with the13th Marine Expeditionary Unit (MEU) arrived there for a scheduled port visit on August 24.

During the visit, Sailors and Marines will have opportunities to explore the local area and meet with their counterparts during exercises with the Sri Lankan Navy and Marines, the US embassy here said in a press release.

The visit is also an opportunity for U.S. Seventh Fleet to explore local logistics support services for visiting naval forces operating throughout the Indo-Pacific region.

Robert Hilton, Chargé d’affaires ad interim of the United States Embassy in Colombo, Sri Lanka, welcomed the arrival of the USS Anchorage and embarked MEU. “This visit and training will build our shared capacity to respond to humanitarian emergencies in the Indo-Pacific region. We’re also excited to try out the air logistics hub concept which utilizes Sri Lanka’s strategic location in the Indian Ocean to ensure the quick availability of relief supplies, equipment and other material when needed by the U.S. and partner militaries and humanitarian organizations.”

“Our Navy and Marine Corps team is deeply committed to continuing to strengthen our partnership with the Sri Lankan armed forces,” said Rear Adm. Brad Cooper, commander, Amphibious Force U.S. 7th Fleet. “We are proud of the tremendous work that American Sailors and Marines are doing alongside their Sri Lankan teammates.”

“These ship visits help demonstrate the value of the growing U.S.-Sri Lanka partnership,” said Jacko. “The goal with Anchorage is to not only enhance security cooperation, but to build understanding of the HADR (humanitarian assistance, disaster relief) capability that contributes to disaster response, along with sharing of best practices and enabling more efficient joint relief efforts in the event of a future disaster.”

Approximately 300 Sri Lankan naval academy midshipmen and 40 distinguished visitors, will tour Anchorage to learn about the ship’s amphibious capabilities. Additionally, Sailors and Marines will conduct training in visit, board, search and seizure, security force reaction techniques with the Sri Lankan Navy and Marines.

Captain Jacko also emphasized the damage control training that will occur during the visit. “The U.S. Navy damage control program is the world’s most proficient, and I’m excited to be a part of sharing our best practices with the Sri Lankan Navy. I’m also very pleased to be able to return to Sri Lanka since visiting in 2010 on USS Pearl Harbor.”

Anchorage, which is part of the Essex Amphibious Ready Group (ARG), and the 13th MEU are deployed to the 7th fleet area of operations to support regional stability, reassure partners and allies and maintain a presence postured to respond to any crisis ranging from humanitarian assistance to contingency operations.

The first ever visit of the Japanese Defense Minister Itsunori Onodera to Sri Lanka, earlier this week, was of great significance to the Indian Ocean region.

Onodera’s itinerary, which included a trip to Hambantota, Trincomalee and Colombo ports, assumes importance in the light of China’s bid to build ports in Bangladesh (Sonadia), Myanmar (Kyaukpyu) and the Maldives (Laamu Atoll). China already has a presence in the Colombo port (the Colombo International Container Terminals) and Hambantota port, which it has taken on a 99 year lease with a 70% stake. It has built and is operating the Gwadar port in Pakistan which is explicitly part of President Xi Jinping’s Belt and Road Initiative (BRI).

Japan is deeply anxious over China’s determined moves to secure control over the countries in the Indian Ocean region by executing infrastructural projects which could have a dual civil and military purpose. In this context it is noteworthy that the Japanese naval vessel “Ikazuchi” was in Trincomalee. during Onodera’s visit.

In his meeting with the Sri Lankan President, Maithripala Sirisena, Onodera pledged to help strengthen Sri Lanka’s maritime security. Japan has already donated two coast guard patrol craft costing over US$ 11 million in total. A week earlier, Japan’s ally, the US, had given US$ 39 million to strengthen the island’s naval capabilities.

The Japanese maritime security expert Saturo Nagao says that there is a Japanese-Sri Lankan project for “Maritime Safety Capability Improvement” worth approximately 1.8 billion yen or US$ 16.5 million, which includes the provision of two patrol vessels to the Sri Lankan Coast Guard.

In his report to the Pathfinder Foundation, former Sri Lankan navy chief, Adm. Dr.Jayanath Colombage, says that analyzing the country of origin of foreign warships visiting the Port of Colombo from 2008 to 2017, it is observed that 65 Japanese Maritime Self Defense Force (MSDF) ships had arrived in Sri Lankan ports, mainly the Port of Colombo.

“This is rather a high number and second only to Indian warships visiting Sri Lanka,” he notes.

(The featured image at the top shows the USS anchorage anchored at the Trincomalee harbor)
newsin.asia