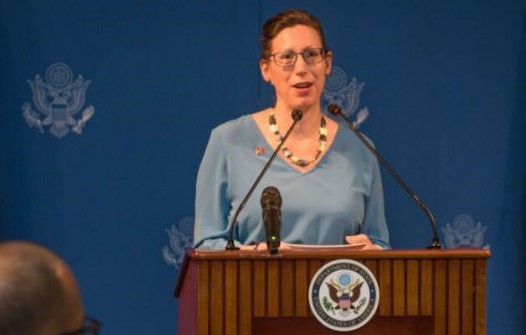 United States Ambassador Allaina B. Teplitz has been summoned to the Foreign Relations Ministry today to be told of the government’s displeasure over the travel ban on Army Commander, Lt. Gen. Shavendra de Silva, considered a ‘war hero’ in Sri Lanka, and his family.

Foreign Minister Dinesh Gunawardena, who will meet her at noon today, will tell her that Sri Lanka is not pleased with the action of US Secretary of State Mike Pompeo. On Friday, the US designated that the current Commander of the Sri Lanka Army and Acting Chief of Defence Staff be blacklisted due to “credible information” of his involvement, through command responsibility, in gross violations of human rights, namely extrajudicial killings, by the 58th Division of the Sri Lanka Army during the final phase of Sri Lanka’s Civil War in 2009.  Mr. Pompeo made the declaration under Section 7031(c) of the Department of State, Foreign Operations, and Related Programs Appropriations Act.

A Foreign Relations Ministry source said the meeting today, despite being a Sunday, underscored the importance Sri Lanka attached to the issue.

The source noted that the US action came days before the UN Human Rights Council sessions in Geneva is set to issue its report on Sri Lanka. This is on the originally US-backed resolution calling, among other matters, for an international court of inquiry to probe alleged war crimes in Sri Lanka.

The Foreign Relations Ministry said the travel restrictions were based on independently unverified information.

In an email to the Sunday Times yesterday, the US embassy in Colombo said the announcement “does not place additional restrictions on security assistance or military engagement in Sri Lanka nor does it represent a shift in policy or desire to limit engagement more broadly with the government and people of Sri Lanka”.

The US embassy added that no other Sri Lankan officials had been publicly designated under Section 7031 (c) to date. “We have no comment about any potential designation beyond those related to Lt. Gen. Silva and his immediate family members”.

A Sri Lankan Government official close to the dialogue that went on between the two governments said that the matter was first raised under the US Leahy Amendment when President Maithripala Sirisena appointed Lt. Gen. Silva as Army Commander, and US policy makers had hoped the matter would be quietly resolved with the retirement of Lt. Gen Silva in January, until President Sirisena gave him an extension before leaving office. Then Lt. Gen. Silva was also made acting Chief of Defence Staff, the highest military post.

During the recent visit of US Assistant Secretary at the State Department Alison Wells, accompanied by a Director of National Security of the Donald Trump White House, the matter had been raised with both, President Gotabaya Rajapaksa and Prime Minister Mahinda Rajapaksa.

However, the US side is emphasising the issue is individual specific (though the family is also blacklisted) and will not have any impact on military-to-military cooperation such as training and joint operations, economic/technical assistance and trade.

The official said it would be difficult to understand how military-to-military cooperation could continue with the head of the Sri Lankan Army blacklisted.

The UN’s (Office of the High Commissioner for Human Rights) report in September 2015 referred to the allegations against Lt. Gen. Silva and troops under his command as a human rights investigation – and not a criminal investigation. “Individual criminal responsibility can only be determined by a Court of Law with all necessary due process guaranteed”.

During two domestic investigations in which Lt. Gen. Silva appeared in person, viz., the LLRC (Lessons Learnt and Reconciliation Commission) and the Paranagama Commission, no substantive evidence was found against the conduct of Lt. Gen. Silva.

They said that the US Government should make public evidence of war crimes allegedly committed and asked why the listing announcement was otherwise made public when their law provided for it to be private, i.e. such as to refuse a visa when applying for one.

Diplomatic sources said that the US Government could always cancel the listing at any time in the future and cited the example of Indian Prime Minister Narendra Modi also being once similarly listed.

Meanwhile, the Tamil National Alliance (TNA) issued a statement yesterday welcoming the US decision to designate Lt. Gen. Silva. The party noted that the TNA had earlier condemned Lt. Gen. Silva’s appointment as Army Commander due to allegations of war crimes, crimes against humanity and human rights violations against him during the final phase of the war, when he commanded the Army’s 58th Division.

It added that the party hoped that the development would open the eyes of the Sri Lankan Government, which had opposed taking accountability measures even 10 years after the war coming to an end. “We consider this as a minor improvement as a result of continuous protests by the war-affected Tamil people,” it said.

Army Spokesman Brigadier Chandana Wickramasinghe stated the Army Commander had not requested a visa to visit the US and had no further comment.