Upul Jayasuriya at the helm of Bar Association: Clear endoesement of BASL stand on Impeachment 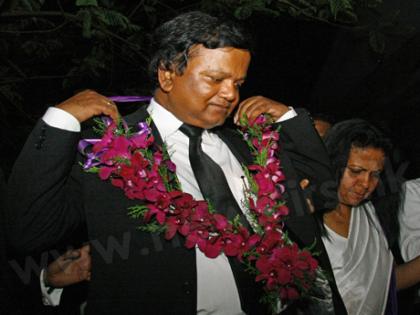 Attorney-at-Law R.R.S. Thangarajah, who has regularly contested for the presidency, was also in the fray.
Some 11,000 registered members of the Bar were eligible to vote at the election for the BASL presidency that was held from 8 a.m. to 5 p.m. islandwide yesterday.

The activist Lawyers Collective hailed Jayasuriya’s victory as an overwhelming endorsement of the Bar Association’s strong stand against the unconstitutional impeachment of the Chief Justice by the Government.

“Jayasuriya was in the forefront of the anti impeachment struggle of the lawyers. The results demonstrate once again that the lawyers that they would not bow down to political pressure or intimidation,” the Collective said.

Jayasuriya is a former Secretary of the BASL and an old boy of Royal College Colombo. He entered Law College in 1973 at the age of 17. He joined the Bar in 1976 at 21, as the youngest attorney at the time. He was appointed

He was elected as the Secretary to the Bar Association of Sri Lanka for the period 1991-1993. During this period he initiated the filing of nearly 3,000 Fundamental Rights applications through the support of the BASL before the

Supreme Court of Sri Lanka on behalf of those taken into custody in the 1989 insurrection.
He was also elected to the presidency of the Colombo Law Society in 2008
FT