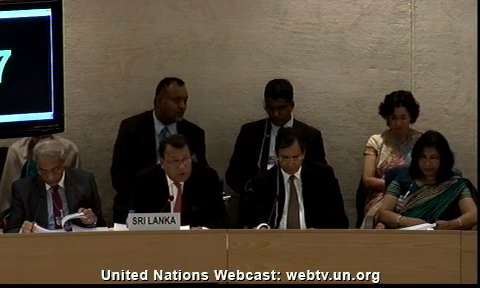 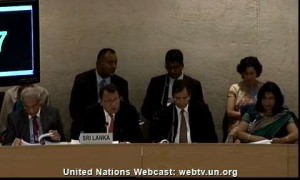 There were prolonged procedural discussions around the report before it was adopted. The delegation of Sri Lankan had introduced endnotes, found on the last two pages of the report, that were hitherto unprecedented. In the end it was decided that the endnotes would be removed from the report, but would be included in an addendum to the WG report. The delegation of Sri Lanka said that it would provide additional explanations of the positions that it took on particular recommendations in the addendum. It also said that it would make an unspecified number of voluntary commitments, which is also unusual as voluntary commitments have hitherto been made before the WG examination, not after. The SL delegation said that the voluntary commitments would be made within the next two weeks.

In the presentation of the WG report, the asterisks that appear after a number of recommendations were explained as follows (rough transcript):

This explanation will be added to the report of the WG.

74. India looked forward to speedy resolution of the residual issues in resettlement and rehabilitation. It called for credible investigations into allegations in the LLRC report. It noted the action plan for time-bound implementation of LLRC recommendations.
In its intervention in the WG, India urged expedition action to take forward the political process for early political settlement.

3. At the same time we recall the commitments made by Sri Lanka to the international community during UPR 2008 and on subsequent occasions for the implementation of 13th amendment and building on it so as to achieve a meaningful devolution package. We urge expeditious action to take forward the political process for early political settlement.

4. We have noted the announcement by the Sri Lankan government on holding Provincial Council elections in the Northern Province in 2013. We urge that the people of the province should be able to exercise democratic rights as guaranteed to them by the Sri Lanka constitution as early as possible.

5. We look forward to effective and timely implementation of the constructive recommendations contained in the LLRC report. These include those pertaining to early reconciliation, promotion of a trilingual policy; return the private land by the military, reduction of high security zones, and pushing out of the involvement of the security forces in civilian activities in the Northern Province. We have noted the action plan proposed by the Sri Lankan Government for the time bound implementation of these recommendations. We believe that the visible progress in this regard will foster genuine reconciliation. We call for credible investigations to be conducted in respect of allegations of Human Rights violation and incidents involving loss of civilian life brought out in the LLRC report
It will no doubt be argued by India and Sri Lanka that this is not reflected in the report of the WG, because India did not “recommend” such action. However, if one looks at the language used in the Indian intervention on 1 November, one finds that the recommendations mentioned in the WG report were not accompanied by the word “recommend” either in the oral intervention . I attach the text of the Indian intervention that is posted on the HRC Extra Net https://extranet.ohchr.org/sites/upr/Sessions/14session/SriLanka/Pages/default.aspx . (Username = hrc extranet; password = 1 session).

The webcast archive of the Indian intervention on 1 November can be found at:
http://webtv.un.org/watch/sri-lanka-review-14th-session-of-universal-periodic-review/1940915085001

See the Indian intervention and Minister Samarasinghe’s reply to India at 2:13 of the webcast archive.

Written by a HRD