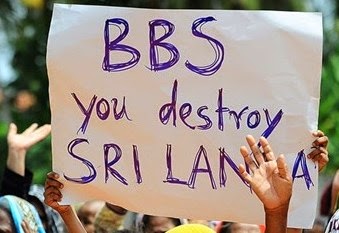 Alleges Government is supporting and protecting Bodu Bala Sena in spite of deadly violence in Aluthgama and Beruwela
◾ Main Opposition takes its own national multi-religious initiative to secure ethnic harmony
◾ Multi-stakeholder meeting convened in Parliamentary complex approves four proposals; further public suggestions sought
Blaming the Government for serious inaction and its responsibility over the deadly Aluthgama clashes, the main Opposition UNP yesterday kicked off a national and multi-religious initiative to safeguard ethnic harmony and avoid a repeat of 1983-type communal riots.
With the participation of Buddhist, Muslim, and the Catholic clergy, along with the representatives of civil societies assembled in Parliament, Leader of the Opposition Ranil Wickremesinghe laid the foundation for a common and independent approach, which “will not seek support or the opinion of the Government.”
The proposed committee will mainly focus at pressurising the Government to “set the record straight and to develop multi-religious harmony from the lessons learnt from the recent clashes in Aluthgama and Beruwala, ensure Constitutional rights of all religious faiths in the country, ensure the establishing of rule of law while maintaining justice and equity at all times, and to gather opinion from all religious leaders to help plotting the future.
Opposition Leader who accepted the UNP Government’s failure to prevent the July 1983 riots said: “Bodu Bala Sena receives the Government’s support. The Government shouldn’t have allowed this to take place. In case this leads to another situation similar to what we experienced in Black July, none of us will be able to imagine the damage it could cause.”
Ven. Girambe Anandha thero charged politicians who brought in the policy in 1956 to establish Sinhala as the national language.
“This is the start of a wrongful journey, which destroyed the harmony between the ethnic groups. Politicians extend their support and use organisations such as Bodu Bala Sena and Ravana Balakaya to be in power. When Muslims arrived here in Sri Lanka for trade, they came alone but got married to Sinhala women. So, today’s Muslims here are partly Sinhala. We used to call them ‘thambiya’, or ‘younger brother’.”
Maulawi Mussamil Mohamed who took a different approach stated unless an independent investigation is conducted “Muslims will have to live with fear. The Tamils forgot that Sinhalese are the majority in this country and they wanted to solve issues having forgotten this factor. We learnt from their failure. We Muslims should not forget the fact that Sinhalese are the majority in Sri Lanka should not try to solve our issues by isolating them.”
Father Thomas Johan Justin of the Catholic Church advised his followers to practice what Jesus preached; to ‘love thy neighbour’. “If we can love our neighbours, coexistence will be easy,” he said.
Azath Sally castigated the Government and praised UNP leader Wickremesinghe for coming forward to form a forum to have an independent investigation on the recent attacks.
“All Muslims should be grateful to Ranil Wickremesinghe who took this seriously when President Mahinda Rajapaksa took this so lightly. The Police and the STF were behind the attacks on most places and the Army was brought in to take control of the situation. We don’t want to have a high-level committee but an impartial but independent committee to investigate,” claimed Sally.
UNP MP Mangala Samaraweera who criticised the Government for funding the Bodu Bala Sena and providing them safety said: “A secret account of the Ministry of Defence funds this terror spreading organisation. Minister G.L. Peiris is going all around blaming outsiders about an unknown conspiracy.
Mahinda Rajapaksa doesn’t know to rule a country in the absence of a war. So, he is creating issues to be elected for the third time. The intelligence community should have kept the Government informed about this issue in advance. Today, the intelligence community led by Secretary of Defence Gotabaya Rajapaksa, who wears underpants made out of the US national flag, only support the culprits.”