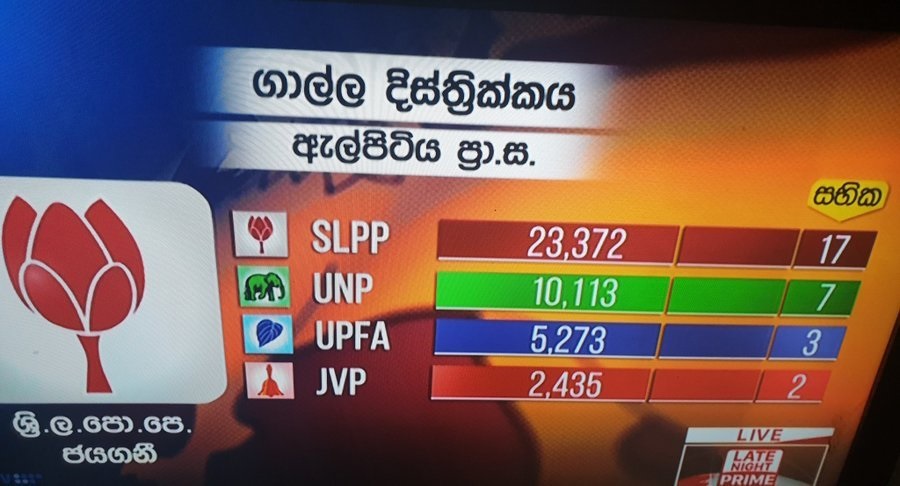 The victory of the SLPP at the long-postponed Pradeshiya sabha election in Elpitiya did not come as a surprise.  This had been an area that has consistently supported the SLFP from which the SLPP has taken the larger part.  Virtually all local authorities in the Southern Province went to the SLPP at the last local government elections held in February 2018.  Therefore it was to be expected that Elpitiya would go the same way.  However, the psychological boost to the SLPP of winning this election so near to the all-important presidential election scheduled for November 16 has been high especially given the margin of victory.  Visiting the southern hinterland a day after the election victory had been announced we could see SLPP cadres carrying out their house-to-house campaigns.  A local civil society activist said that the UNP’s campaigners had still to pay a visit to his area, whereas the SLPP cadres had done three such visits so far.

We visited a school in Gandara where an inter-ethnic peace programme was being conducted for children and their parents with the assistance of local government officials. This had not been easy to organize.  The district inter-religious committee had invited Buddhist monks from five temples to the event which was to take place at the Al-Asar Muslim school, but monks from only one turned up.  The monks in two of the temples had chided the organisers for their choice of venue. The build up of mistrust between the communities in the aftermath of the Easter Sunday attacks, and the election campaign of the SLPP which emphasizes the importance of national security, would have contributed to this attitude. But the commitment of the civil society activists ensured that a large enough number of Sinhalese children joined the programme where they, together with Muslim children, drew pictures of inter-ethnic harmony together.  In doing so they got to know each other better, and so did their parents who had accompanied them.

The children were divided into 5 groups randomly and they worked together regardless of different ethnicities, religion and language to come up with their pictures. The children then presented their artwork together and explained the concept behind it showcasing positive reconciliation thoughts. The local groups involved who collaborated to make the event a success comprised a wide range of both state and civil society and included the Matara district branches of the National Youth Services Council, Sri Lanka Human Rights Commission, Sarvodaya, Transparency International, Gandara Fisheries Society, Gandara Police Station and Community Policing Unit, Matara District Inter-religious committee and National Peace Council.  This showed the potential for peace building if the necessary leadership was given.

A key factor in the heavy defeat of the UNP and its inability of get more than 23 percent of the Elpitiya vote was due to the lack of a systematic political campaign on the part of the grassroots cadre of the UNP prior to the local government election.  This was on account of the party’s focus on the power struggle within itself regarding its presidential candidate.  The decision to finally field Minister Sajith Premadasa as the UNP’s presidential candidate came just two weeks before the Elpitiya election, by which time it was too late for anyone to reverse the tide.  However, it is likely that the candidacy of Sajith Premadasa will at least partly address the deficit that the UNP currently suffers from in the south of the country amongst the Sinhalese electorate vis-à-vis the SLPP.  The key factor here is that he is more popular than his party.

Under its current leadership, the UNP has come to be seen as a hands-off party by people at the grassroots level, whose leaders are cosmopolitans who deal with global and policy issues but not with local level problem solving.  By way of contrast, Sajith Premadasa is seen as a political leader who cares for the poor and will spend his time with them solving their problems.  He has been strengthening this belief in the general population by saying that he will not live in palaces in Colombo but will spend his time in the villages.  The mobile presidential secretariat that engaged in immediate local level problem solving that his father introduced when he was president can be expected to make a comeback if the younger Premadasa were to win the presidency.  This will address the desire in the electorate for leaders who will care for them and work hard to resolve their problems.

Sajith Premadasa has gone on record saying that it is necessary to promote policies in a way that they are acceptable to the people.  One of the main failures of the government has been to communicate its positive initiatives in a way that reaches mass audiences.  A school teacher at the Al Asar school in Gandara said that the Suraksha insurance scheme for school children had benefited four children in the school.  Two of them had received a sum of Rs 200,000 due to the death of a parent and another two had received a sum for Rs 10,000 for having been sick and in hospital.  A local government official who was part of the conversation admitted to not knowing of the existence of this insurance scheme.  He attributed this to inadequate communication by the government. This was contrasted with the previous government which excelled in communication though at high cost.

Civil society activists present also explained another problem with the government’s development initiatives. It was that they are not visible, even though they have improved the lives of the people.  The most compelling one has been the greater sense of freedom from fear of being victimized by those with power and either punished unfairly or made to disappear.  But as this benefit is not visible, it is not seen as being a part of development.  A similar issue arises with improvements in the institutional frame of governance as thought the Right to Information Act (RTI) which empowers people to challenge the government authorities at various levels regarding their conduct.  An example given was of Samurdhi welfare benefits which had been distributed by government officials unfairly leaving out the more needy persons.   The filing of an RTI asking why they were left out often resulted in the inclusion of those who had been left out.

The election result from Elpitiya will serve as a wake-up call to the UNP that it has to regain the confidence of the larger electorate that expected it to deliver on its promises made in 2015 regarding good governance, economic development and national reconciliation.  The main lacuna has been in the area of economic development with the economy registering low rates of growth and the poorer sections of the population feeling that they have been standing still while they see others move on.  The choice of Sajith Premadasa, with his focus on the poor and on providing housing as the most basic of economic rights, has rejuvenated UNP supporters as witnessed in the massive shows of strength at his inaugural and subsequent public rallies as the official candidate of the UNP.

However, the gap in the south of the country in relation to the SLPP remains substantial and needs to be bridged.  In his recent public statements as presidential candidate, Sajith Premadasa has welcomed all likeminded parties and groups to join the New Democratic Front, and said that they will all be treated with respect as constituent parties of the alliance. In one of his recent discussions with local politicians, he specifically referred to wanting President Maithripala Sirisena to join the alliance.  The president has taken the position that he will be neutral in this election even though the parliamentarians in his party have all pledged alliance to the SLPP.  In the aftermath of the Elpitiya verdict, there will also be pressure to reach out to  other presidential candidates who are likeminded in term of their policies in order to close the gap, most notably Anura Kumara Dissanayake of the JVP and General Mahesh Senanayake of the National People’s Movement.  Only a maximum alliance of like-minded parties and groups will be able to match the juggernaut of the SLPP.