UNP adopts four resolutions; No mention of the ethnic conflict 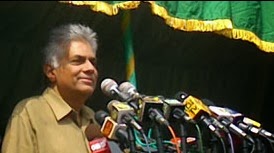 The main opposition United National Party (UNP) adopted four resolutions at the party convention held at the UNP headquarters in Sirikotha today.
UNP General Secretary Tissa Attanayake proposed the resolutions and party leader Ranil Wickremesinghe then called for a show of hands to have them approved.

All four resolutions were eventually approved by the party members attending the 55th convention of the UNP.

One resolution states that the party will work towards victory at the next elections with the appointment of the UNP Leadership Council.

The fourth resolution adopted at the UNP party convention today is to collectively work towards electing a Government which would bring relief to the people.

Attanayake said that the fourth resolution includes urging the UNP Working Committee to remain undivided on working against the Government and party members backing the UNP Leadership Council to work towards that goal. (Colombo Gazette)