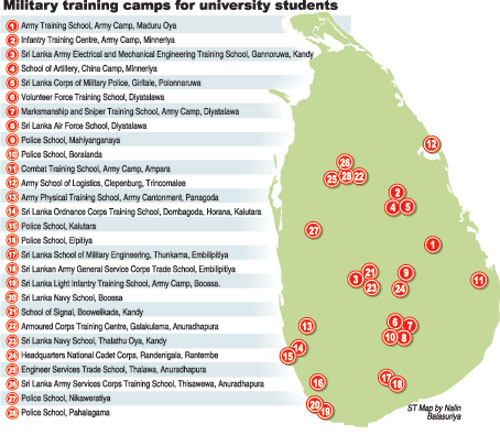 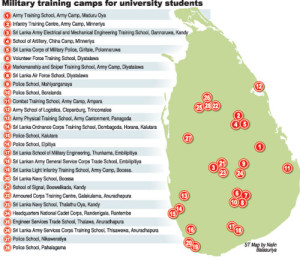 With the “Leadership and Positive Attitude Development” programme scheduled to start tomorrow at various Army camps, Nadia Fazlulhaq speaks to concerned parents of new entrants to universities, students’ unions and officials involved in the programme

The disputed leadership programme organized by the Higher Education Ministry in collaboration with the Defence Ministry has officials defending it as a programme aimed at making universities violence-free while parents of university entrants and students union leaders have voiced concern.

The programme will include physical activities including parade ground marching and lecture series aimed at making students more disciplined officials say. The government hopes the three-week “Leadership and Positive Attitude Development” programme to be conducted by defence training experts, sociologists, psychologists, leadership and strategic training experts in 28 military camps will help discourage violence among university students, ragging and keep students away from political involvement during campus years.
File pix of Army recruits undergoing training. Will it be similar for University students too?

But parents are concerned about sending their children, especially daughters to military camps for physical training. “By making this training mandatory, Higher Education Ministry authorities are being unjust to the parents and students. My youngest daughter has to travel far for the training programme,” Nalani Ganegoda, a concerned parent from Anuradhapura said.Although they are from Anuradhapura, her daughter has been allotted to the Maduru Oya training camp in the Uva Province. Students are nominated not areawise but according to alphabetical order.

Nalini is among other parents who are also finding it difficult financially to buy the required items on the list within a short time. This year 22,000 students have qualified to enter universities. The first batch to be trained will consist of 10,000 students 5931 girls and 4069 boys. Another parent from the Colombo suburbs said he feared sending his daughter to the training camp despite the minister assuring security for female trainees.

“My daughter was not into sports and physical activities; she was only interested in studies. We come from a conservative family and my concern is that the ministry does not explain the type of out-door activities,” he said.

The Rs. 125 million residential training will include 171 lessons with nine each day. Out of the total time slots, 66 are allocated for leadership training with 22 in-house leadership activities. Training for the first batch will begin tomorrow and end on June 12.

Anuradhapura, Diyatalawa, Kandy, Kalutara, Minneriya, Mahiyanganaya, Polonnaruwa, Rantembe and Trincomalee will be the main army venues for training. “We have failed to produce globally- employable graduates. These students lead a life similar to that of Advanced Level classes with no sports or extra-curricular activities and depend on notes provided by lecturers,” Dr. Nawaratne said.

He said in many instances many university students waste the first two years on political activities and participating in strikes while the final year is spent ragging freshers. “Around 18,000 students graduate annually, but 50 percent remain unemployed as they lack team work, communication, leadership and conflict resolution skills,” he said.

He said if a student is suffering from an infectious disease, he/she should produce a letter and they will be referred to the next batch of training. Those suffering from severe illnesses such as heart ailments; kidney related illnesses have to be present at the centres along with necessary medical documents. They will be examined by military medical officers at the camp and given instructions, he said.

These students are also required to bring a suitcase or a travelling bag, a cap, two bed sheets, two pillow covers, a towel, soap, tooth brush and tooth paste, shoe polish, two file covers, a cup and a plate and two pens. Trainees are advised to avoid bringing valuable items and using mobile phones during out-door training periods is not allowed.

“This is not military training but we have collaborated with the Defence Ministry as military camps have space for both indoor and outdoor activities, provide accommodation and food for about 1000 students in each camp,” Dr. Nawaratne said.

However, students unions have charged that this is more like an enforced military training programme than a leadership programme. “They can easily conduct non-residential leadership training course at the universities. This clearly violates the fundamental rights of students. Authorities have not consulted parents or students before implementing this project,” said convener of the Inter University Students Federation, Sanjeewa Bandara.

He said, that talented female students from conservative backgrounds may drop out from universities as parents are reluctant to send them for the training program me.

The petitioner, a company dedicated towards the cause of protecting and promoting the human rights of students cited Dr. Sunil Jayantha Navaratne, Minister S.B. Dissanayake, the University Grants Commission, its Chairman and the Attorney General as respondents.

Attorney Saliya Pieris appearing for the petitioner in his submission said that on May 16 an article appeared on the university website instructing the students entering the university to enter their index number and their identity card number after which their names will appear informing them to which camp they would be attached and stating what items they should bring to follow the training program.Mr. Pieris said that this was a mandatory requirement to enable a student to enter the university thus violating his/her fundamental rights.

He said that at least one of the students should have been cited as a petitioner. He stated that on May 12 letters had been sent to the students regarding this program and they could not say that they were not informed on time. He also said that notice was issued only to the Attorney General and not to the other respondents.

The Bench comprising Justices K. Sripavan, Chandra Ekanayake and Suresh Chandra instructed the petitioner to issue notice by courier through the Registrar to the 1st, 3rd and 4th respondents. They also said that as the petition is pending in Court the Attorney General should consider giving necessary instructions to the relevant authorities to postpone the programme which is to commence on May 23, by at least one week.

The case was listed to be heard on May 24.
ST