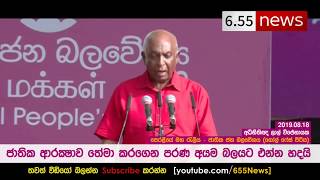 Image: Lal Wijenayake, secretary general of the ULF  has been a prominant speaker at Jathika Jana Balawegaya public meetings  for some time now.
In an email Dr Jayampathy Wickramaratne, Member of Parliament and National Organizer, United Left Front has explained the position of  United Left Front regarding the up coming presidential election.
The text of the e mail followers:
My attention has been drawn to media reports on the decision of the United Left Front in regard to the Presidential elections. While the Central Committee decided to support Comrade Anura Dissanayake of the Jathika Jana Balavegaya, it also decided to request party supporters and the people to mark the second preference in favour of the strongest candidate against Gotabaya Rajapakse in order to defeat the threat of authoritarianism. The consensus was clearly to pursue both objectives with the same vigour.  No decision was taken to leave the Government. On the other hand, the Party decided unanimously that I should continue to sit on the Government benches.
Please publish my comment as there have been media reports which did not give the complete picture and some reports said that the ULF has decided to leave the Government.
Share
Facebook
Twitter
WhatsApp
Pinterest
Email