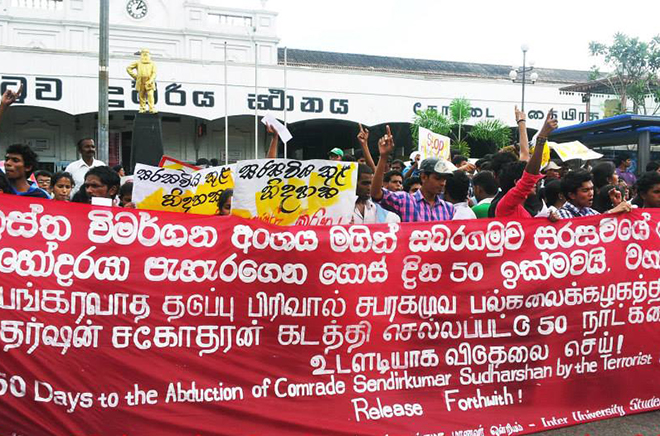 The purpose of the demonstration was to demand the immediate release of the University of Sabaragamuwa student, Sandeer Kumar Sadeshan who was abducted by the Terrorist Investigation Division (TID) on the 9th August. Students claim that the student has been under the custody of the TID for more than 50 days for no reason whatsoever. Students accuse the government of trying to ignite racial disharmony within the university as an extension of its strategy of keeping the masses divided in order to maintain the neoliberal asssault on the country’s economy.

Under the Prevention of Terrorism Act Sri Lankan law has bestowed wide powers on the Terrorrist Investigation Division to arbitrarily arrest any citizen under the charge of engaging in terrorist activity. Sandeer Kumar is a Tamil student who the government claims is a rehabitated member of the L.T.T.E, the seperatist organization that waged a civil war within the country for more than 30 years. L.T.T.E was militarily defeated by the government in a brutal war in 2009 which has brough the government under the scrutiny of Human Rights Organizations including the United Nations Human Rights Council.

Convener of the Inter University Students’ Federation Najith Indika pointed out that Sandeer Kumar who is only a first year student at the University of Sabaragamuwa, even if he was a member of the L.T.T.E could not have been more than a child soldier. He questioned whether forced to being a child soldier was the crime that Sandeer Kumar committed for the government to charge him with terrorism. He also stated that terrorism, meaning politics by fear is only practised by the government and nobody else.

Meanwhile Gotabaya Rajapakse, the Secretary of Defense has identified leftist activism and student activism as a possible threat to ‘National Security of the Country’. He has expressed these opinion in an articel published in an American Defense Periodical.

Students are accusing the government of trying to use the age old trick of racism and religious extremism in the country in order to carry on with their neoliberal economic reforms.