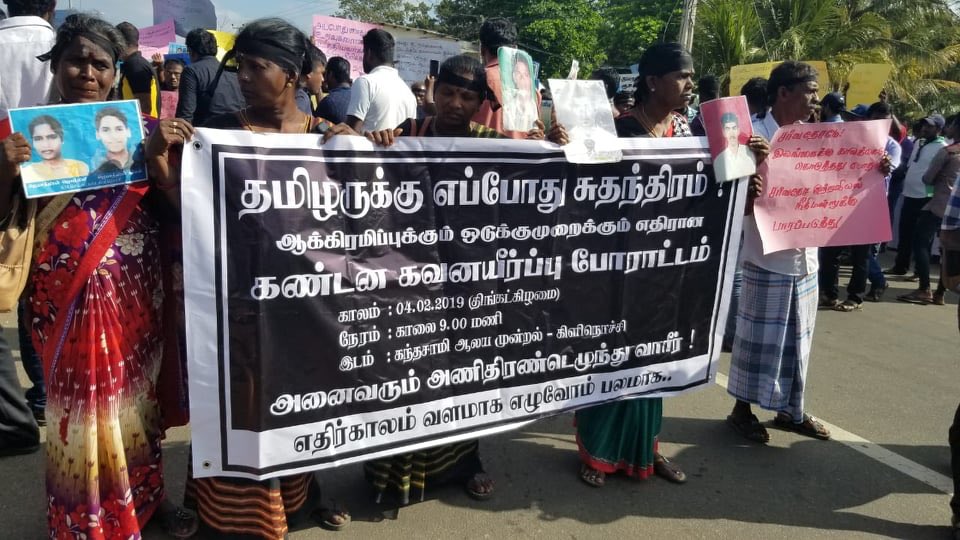 Image: Section of the war victims campaigned against another resolution on Sri Lanka ( Tweeter photo)

The Global Tamil Forum (GTF) acknowledges the passing of the resolution ‘Promoting reconciliation, accountability and human rights in Sri Lanka’ (40/1) at the UN Human Rights Council (UNHRC), and thank all those who worked towards it, particularly the thirty-two countries that co-sponsored, among those the core-group that led this initiative. While we welcome continuous monitoring of human rights and accountability in Sri Lanka by the UNHRC, we are disappointed that the new resolution failed to set clear pathway for accelerated progress towards implementation of the Resolution 30/1.

There is strong disappointment in the Tamil community that ten years after the end of the war, and three years after Sri Lanka co-sponsored Resolution 30/1, there is very little progress on accountability and transitional justice. High Commissioner Michelle Bachelet’s report to the Council accurately describes this unfortunate reality – the minimalist initiatives by Sri Lanka ’have yet to produce concrete benefits for individual right holders’; ‘such slow progress in establishing meaningful transitional justice measures has engendered mistrust among victims and other stakeholders’; and that ‘Sri Lanka has failed to seize the opportunity provided by the Human Rights Council to establish a trustworthy domestic mechanism to address impunity.’

Therefore, the burning question among the victims and the Tamil community is – what difference is another resolution going to make, considering this is the seventh UNHRC resolution in the decade after the end of the war? It is this dismal performance by the Sri Lankan government and the increasing frustration among the victims that UNHRC will not be able to course-correct Sri Lanka towards an acceptable pace of progress that contribute to calls by many that UNHRC should refer Sri Lanka to the UN Security Council for further action.

Resolution 40/1 seriously falls short of required action – Sri Lanka’s abject failure and delay in implementing its key commitments, the continuing sufferings of the victims and their families, and the need for accelerated progress on constitutional reform for devolution of power have not merited mention; and it does not set timelines and benchmarks to guide and monitor progress. Our minimum expectation for this resolution was to incorporate a time-bound action plan with the involvement of the OHCHR – very much in alignment with High Commissioner’s recommendation. While the need for a time-bound implementation strategy is acknowledged, it is disappointing that the resolution lacks specificities of how it will become operational. It is our earnest request that such an operational arrangement be worked out as an urgent priority with the full involvement of the OHCHR.

We call upon the international community and the key UNHRC member countries to ensure two unambiguous messages are conveyed to the people and the leaders of Sri Lanka:

Accountability for the atrocity crimes committed in Sri Lanka via faithful and timely implementation of Resolutions (30/1,34/1,40/1) is a must, and that the absence of which will have consequences – may that be diplomatic, judicial or economic as appropriate; and

Assurance to the community of victims of all different backgrounds that they will not be abandoned before achieving a sense of justice, closure and the reforms needed for non-recurrence.

Such strongly articulated positions are critical to emphasize urgency and commitment to the political leadership of the country and to prevent the victims’ further descent into despair.

We firmly believe that steady progress and eventual success of the current transitional justice initiatives in Sri Lanka is crucial – not only to maintain and enhance the reputation of the UNHRC as an effective UN organ capable of living up to its creation mandate, but also specifically for Sri Lanka to prevent any seeds of potential conflict germinating in the hopeless and desperate situation most victims find themselves in.

We urge member states to take note of the High Commissioner’s recommendation that they “investigate and prosecute, wherever possible, in particular in accordance with universal jurisdiction principles, those allegedly responsible for such violations as torture, enforced disappearance, war crimes or crimes against humanity; and explore other options to advance accountability in the absence of credible domestic processes.” We also urge member states to consider adopting parallel processes on accountability to supplement efforts by the UNHRC to deal with atrocity crimes in Sri Lanka during and after the war that ended ten years ago. (GTF)