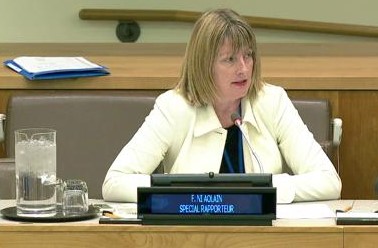 In the context of Sri Lanka, as mandate holder I have continued the engagement opened up by the visit of Mr. Emmerson July 2017. The report affirms the important opportunity available to the government to address long-standing and serious human rights concerns, in respect of fair trial, allegations of torture, inhuman and degrading treatment, ensuring accountability for serious violations of human rights and humanitarian law, and redressing stigmatization and exclusion of minority communities.

Mr. Emmerson and I welcomed, in particular, the commitment of the government review and repeal the Prevention of Terrorism Act and to replace it with new legislation. As I have affirmed in communications with Sri Lanka the new legislation makes significant and commendable efforts to address procedural protections for rights, deepens access to judicial oversight, and provides for a range of important human rights protections, including a role for the Sri Lankan Human Rights Commission. I encourage the government to continue its focus on legislatively enacting a tight and limited definition of terrorism, to ensure proscription is a limited and proportionate device, to ensure violations of human rights are speedily and effectively addressed and to enable full and unrestricted access to legal counsel and magistrate oversight.

I also bring attention to reform of the Security Sector including full civilian control and oversight, and proportionate representation of all groups including minorities, as well as a fair and through vetting process to ensure that persons who have committed serious human rights violations are held accountability for their actions. The mandate looks forward to its ongoing work with the government, and continues to offer my technical assistance to your endeavors.
—–
In terms of State practice in this area I make the following recommendations:

(2) States must ensure that their measures to address the threats of terrorism and violent extremism and to protect national security do not negatively impact on civil society. In particular:
a. States are encouraged to establish independent mechanisms to review and oversee the exercise of emergency powers, terrorism legislation, administrative measures related to terrorism, and legislation addressing violent extremism. The mandates of such independent mechanisms should specifically include the effects of such legal measures on the functioning and capacity of civil society.
b. Definitions of terrorism and of violent extremism in national laws must not be overly-broad and vague. They must be precise and sufficiently clear to avoid including members of civil society, or non-violent acts carried out in the exercise of fundamental freedoms. The protection of national security must be narrowly construed. Emergency measures must be strictly limited, and not be used to crackdown on civil society actors and stifle freedom of expression
c. Legitimate expression of opinions or thought must never be criminalised. Non-violent forms of dissent, criticism of the State and of government action, are at the core of freedom of expression. Reporting on, documenting or publishing information about terrorist acts or counter-terrorism measures, are an essential aspect of transparency and accountability.
d. Measures that aim to regulate the existence and control and limit the funding of civil society must comply with the requirements of proportionality, necessity and non-discrimination. The failure to comply with administrative requirements must never be criminalised.
e. Humanitarian actors should be protected from any forms of harassment, sanctions or punishment resulting from measures to counter terrorism or violent extremism. Humanitarian action must be clearly exempt from measures that criminalise various forms of support to terrorism.
f. Judicial access and remedies must be available to all civil society actors impacted by terrorism sanctions regimes.

(3) All national and institutional actors involved in countering terrorism and PCVE:

a. Must be conscious of the serious indirect impact that overlapping, sustained and cumulative measures have on civil society, notably in creating a chilling effect that will affect all actors even without direct targeting. Particular care must also be had to avoid the stigmatisation, marginalisation, co-optation, and exclusion of civil society, as well as securitisation of its work.

b. Are encouraged to pay greater attention to the impact of the increased regulation of the ‘pre-‘ and ‘post-’ criminal space and its effects on civil society actors, notably through the development and use of various lists of broad categories of vaguely-defined individuals such as “terrorists” and “foreign terrorist fighters” that are shared between jurisdictions.

(From the Statement by Ms. Fionnuala Ní Aoláin, SPECIAL RAPPORTEUR ON THE PROMOTION AND PROTECTION OF HUMAN RIGHTS AND FUNDAMENTAL FREEDOMS WHILE COUNTERING TERRORISM at Human Rights Council – 40th Session on 1 March 2018)