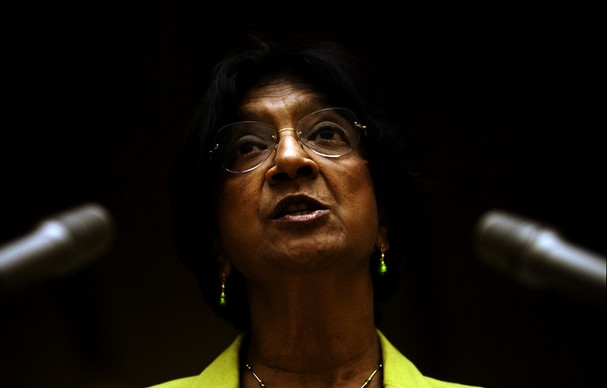 For full speech of the High Commissioner please see here
The Human Rights Council opened its 21st session today in Geneva, with UN Secretary-General Ban Ki-moon commending the actions of the Council on Libya and Syria and stressing that “we must use all our tools to shine the light of human rights everywhere.”

“We need to do more to ensure that the output of this Council and other United Nations human rights mechanisms shapes policy making across the United Nations,” he said. “I remain strongly committed to mainstreaming human rights throughout the Organization.”

In his speech, the Secretary-General reminded States of the responsibility to protect those who “courageously advocate and risk their lives to defend human rights and the values of the Charter,” and commended the progress made by the Council in various thematic areas and stressed the need to fight for the rights of women, including “their reproductive rights and their political, social and economic empowerment.”

He urged Governments to see the Special Rapporteurs “as indispensable sources of expertise and as valuable partners in building more just, equitable and secure societies”. He also invited Member States “not break the virtuous cycle of 100 per cent participation in – and cooperation with – the Universal Periodic Review (UPR) mechanism.” He added that the UPR is both a national framework and an international process that can strengthen human rights protection everywhere.

The Secretary-General also called on Member States to increase budget allocations for human rights so that the Office has the resources it needs to carry out its critical work. “By investing in human rights, you invest in the peaceful, prosperous, sustainable future we want,” he concluded.

In her address to the Council, since the renewal of her second mandate, UN High Commissioner Navi Pillay stressed numerous challenges that continue to persist and “preoccupy us: poverty, impunity, armed conflicts, refugee flows, discrimination, religious intolerance, arbitrary executions, and the impact of the pervasive economic and financial crisis.”

Pillay expressed concern over the harsh prison sentences against human rights activists in Bahrain, the situation of indigenous communities in Colombia, the attacks on internally displaced persons in Cote d’Ivoire, the situation in the Democratic Republic of the Congo, the recent forced closure of Roma camps in France, and the on-going conflict in Syria, which will be addressed later in the session when the Commission of Inquiry presents its latest report.

She also stressed other countries situations that deserve the attention of the Council and the UN Human Rights Office. These include xenophobic attacks in Greece, the recent inter-communal violence in Kenya, the human rights situation in the occupied Palestinian territory, and the recent events at the platinum mine is South Africa. She also spoke about the situations in the Maldives, Mali, Mauritania, Mexico, Myanmar, Nepal, Pakistan, Sudan and Tunisia.

On death penalty, Pillay said that “the global trend and position on the death penalty has evolved.” Currently around 150 of the 193 member States of the United Nations have abolished the death penalty or introduced a moratorium, either in law or in practice.

“However,” Pillay stressed, “some States continue to use it, often in violation of international human rights and fair trial standards.”

Referring to the economic crisis, Pillay said that it was crucial that “cuts in public spending do not negatively impact the enjoyment of human rights, and the needs of the poorest and most vulnerable.”

She then highlighted the activities of the Office in the areas of sustainable development, older persons, gender equality, religious minorities, people of African Descent, the achievement of the Millennium development Goals and the work of the Human Rights Treaty Bodies.

Pillay also reminded delegates that on 24 September she would participate in the high-level meeting on the rule of law during the high-level segment of the UN General Assembly’s session.

Pillay concluded her address by expressing her concern about the financial status of the Office is a critical concern, both in respect of mandated activities that should be fully supported by the United Nations regular budget, as well as on the extra-budgetary side.

The High Commissioner’s address to the Council marks the start of a three week session, which ends on 28 September 2012. A range of debates will be held on issues of intimidation and reprisals, indigenous peoples and their access to justice, and women empowerment. About a hundred side events are scheduled during the session.

The Human Rights Council has 47 Member States and is responsible for promoting and protecting human rights globally. The Council meets three times a year but may convene for special sessions to address specific human rights issues or situations of concern.