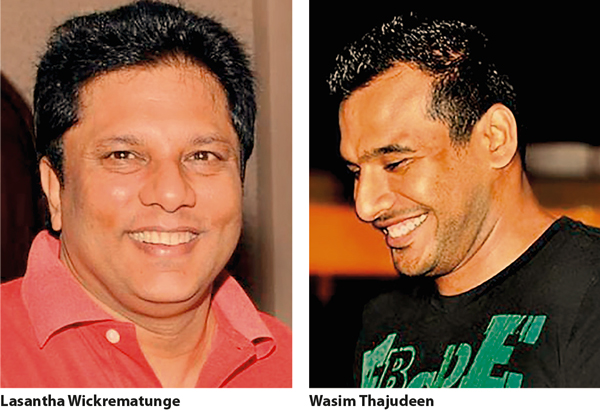 The Criminal Investigation Department (CID) pointed fingers at the security forces over its failure to conclude investigations into some high-profile criminal cases, The Sunday Morning learnt.

Reports on six high-profile investigations were handed over to the Attorney General’s (AG) Department last week.

Meanwhile, following the updated report on investigations that had been submitted by the Acting IGP, the AG in a response on Friday (23), instructed the acting IGP to appoint appropriate senior officials to take forward the investigations of five high-profile cases which have been under investigation for several years, and to expedite the inquiries and submit complete investigation reports of these cases.

In the letter, the AG pointed out that the CID’s reports had failed to identify proper witnesses and suspects, and also failed to lay out future plans and end dates of the investigations. The CID had also not clearly mentioned the grounds on which they would require his advice to proceed with the investigations on these cases.

In his letter, AG Dappula de Livera made certain observations of the CID’s reports. They are as follows:

Accordingly, the AG expressed concern that no progress had been made on these cases despite investigations being carried out for a number of years.

In June, the AG had ordered the Acting Inspector General of Police (IGP) and the CID to complete investigations and submit reports.

On 15 August, the AG had sent a similar reminder.

In response to the requests made by the AG, the acting Police Chief handed over the reports on those cases last Thursday.

The Sunday Morning learnt that the CID had told the AG that in some cases, the security forces had failed to assist in investigations and this was causing the delay in concluding the probe.

Among the high-profile cases being investigated is the murder of journalist Lasantha Wickrematunge.

Wickrematunge was killed on 8 January 2009 around 10.25 a.m. near the Attidiya Model Primary School and it was later revealed that the assailants had followed Wickrematunge and attacked him while he was on his way to work from home.

A few months after the murder, the CID made a revelation in the case pertaining to the suspected murderer and arrested a person named Jesudasan in Nuwara Eliya, whose death while in police custody still remains a mystery. The CID was then removed from the investigation.

After the present Government came into power in 2015, the case was re-opened, but had not made considerable progress with the CID unable to find evidence that could directly connect anyone to the murder. Among the suspects arrested were former Senior DIG Prasanna Nanayakkara and former Mount Lavinia Police Crimes OIC SI Tissa Sugathapala who was granted bail later. It was reported that the two suspects had agreed to testify as state witnesses in the case.

Police Media Spokesman SP Ruwan Gunasekara, however, said that the CID had not yet submitted the extracts of the investigation into Wickrematunge’s murder. 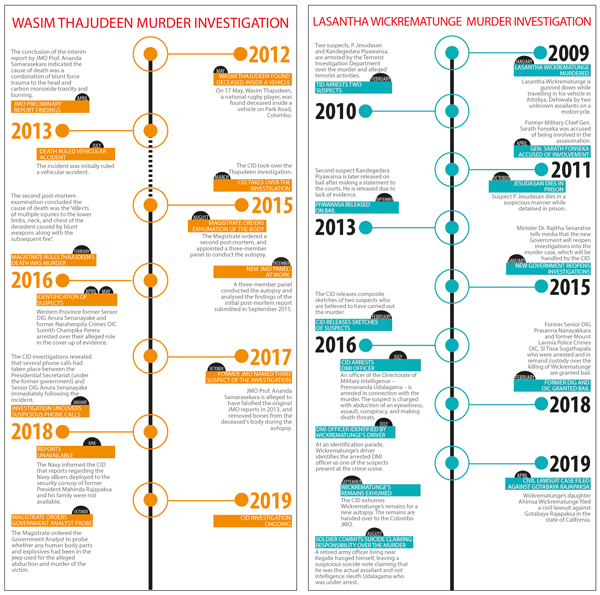 Another high-profile case being investigated is the disappearance of journalist and cartoonist Prageeth Eknaligoda who went missing in Colombo on 24 January 2010.

He had allegedly been abducted two days before the 2010 presidential election, in which then incumbent President Mahinda Rajapaksa was contesting against former Army Commander General Sarath Fonseka.

The Sunday Morning learnt Eknaligoda’s case is being handled by Deputy Solicitor General Dileepa Peiris of the AG’s Department and considerable progress has been made by the investigators.

Details of telephone conversations had been obtained and analysed by the CID. Further, details of SIM cards used by the suspects had also been recovered by the CID. During the investigations, it was revealed that Eknaligoda was initially abducted in 2009 and released and was again abducted in 2010, the day he went missing.

A connection between several army officers has been revealed during the investigations, but the investigators were unable to take the probe forward as attempts to secure official documentary evidence from the Sri Lanka Army pertaining to mobile phone numbers issued to its personnel, vehicle running charts, and leave registers that could all be vital evidence in the high-profile journalist abduction case, had not been successful.

Several months ago, when Sandya Eknaligoda, the wife of Prageeth Eknaligoda, spoke to The Sunday Morning, she said that even though it had been several years since her husband disappeared, no progress was made in the investigation into his disappearance.

She alleged that the Army was not providing the necessary assistance in the case and cited that as the reason for the delay in finding the culprits. Eknaligoda took her protest to the UN; even though she had been threatened and insulted by various people, she is still determined to continue her fight.

At the time of his death, on 17 May 2012, Wasim Thajudeen was 28 years old. His remains were found in the passenger seat of his charred car near the Shalika Grounds that day.

In February 2015, following a change in government, the Police announced that Thajudeen’s death was not accidental and that the investigation had been handed over to the CID.

In May 2015, the Colombo Additional Magistrate ordered the Judicial Medical Officer (JMO) to hand over all the photographs and notes related to Thajudeen’s death to the CID.

The CID informed the Magistrate in June 2015 that the post-mortem and the Government Analyst’s (GA) report were contradictory and that they had asked the AG for instructions on how to proceed.

However, as per reports, the AG reported to court that there was reliable information that a Defender vehicle linked to former First Lady Shiranthi Rajapaksa’s charity, the Siriliya Saviya Foundation, had been involved in the chase and abduction.

In August 2017, the CID questioned former First Lady Rajapaksa regarding the Defender vehicle allegedly linked to the charity. On the same day, former President and current Opposition Leader Mahinda Rajapaksa’s youngest son, Rohitha, was also questioned for five hours in connection to the investigation into Thajudeen’s murder.

He was released on cash bail of Rs. 1 million with two sureties of Rs. 2 million each, by the High Court. He was also banned from foreign travel and his passport was impounded. In the meantime, the court also issued summons to six prosecution witnesses, including former Narahenpita Crimes OIC Sumith Champika Perera, to appear before court on 23 October 2019 to give evidence.

Former Senior DIG Senanayake is accused of having screened evidence pertaining to the Thajudeen case, knowing or having reason to believe that an offence had been committed, and providing false information concealing the offender from legal punishment.

Furthermore, the AG had named 24 witnesses in the case including Thajudeen’s sister, Fathima Thajudeen, and Colombo Chief Judicial Medical Officer (JMO) Prof. Ajith Tennakoon. During the magisterial inquiry, former Narahenpita Crimes OIC Perera and former Colombo Chief Medical Officer Prof. Ananda Samarasekara were also named as suspects in the case. They too were alleged to have covered up evidence of Thajudeen’s murder.

The case will be taken up for trial on 23 October 2019. The case is being handled by Deputy Solicitor General Dilan Ratnayake on behalf of the AG.

SP Gunasekara said the extracts of the investigation had been sent to the AG’s Department and further investigations were being conducted.

In addition, the Police Media Spokesman said conducting investigations into these high-profile cases was taken over by the CID several years after the incidents and therefore, probing separate cases was very complicated.

When asked how long it would take to complete the investigations, SP Gunasekara noted that apart from the investigation into the abduction of journalist Keith Noyahr, an exact time frame could not be provided for the rest.

“The relevant officers have informed that the probe on Keith Noyahr would be completed in two months,” he added.

Further, extracts of investigations into the disappearance of 11 youths, murders of 17 aid workers, and the abduction of journalist Keith Noyahr were submitted to the AG’s Department.

The Acting IGP had informed the CID to enlighten him, through a daily progress report, on the court hearings on these cases, he added.

Furthermore, the family members of a young worker at the Free Trade Zone (FTZ), Roshen Chanaka, who was shot dead during a protest in 2011, the 27 inmates who were killed in a riot that broke out in Welikada Prison during a search for illegal arms in 2012, and the three people who were killed while crowds were dispersed in Rathupaswala during a protest held to demand water in 2013, are also still waiting for justice.

When contacted, Army Spokesman Brigadier Sumith Atapattu denied the allegations that the Army had not supported the CID in carrying out the investigations.

He said the Army had so far provided all the information that was requested by the CID officials regarding these particular investigations.

Meanwhile, responding to the allegations levelled against the Sri Lanka Navy, Navy Spokesman Lieutenant Commander Isuru Suriyabandara told The Sunday Morning that those who levelled allegations against the Navy had not informed the Navy in an official capacity so as to reach the Navy Commander for any sort of action.

“We have still not received any information as such. But so far, we have given whatever information to the CID or Terrorist Investigation Division (TID). We cannot give something which is not with the Navy or in connection to something that may have taken place probably 10-15 years ago; we might not have that information with us right now. If there’s such a problem, anyone can go straight to the Navy Commander and request the information,” he added.

Further responding to the allegations about the missing documents, the Navy Spokesman noted that they could request for an investigation.

“We don’t know what files they are talking about. Anyone who wants to figure that out is warmly welcome and can request for an investigation,” he added.

By The Sunday Morning News Desk