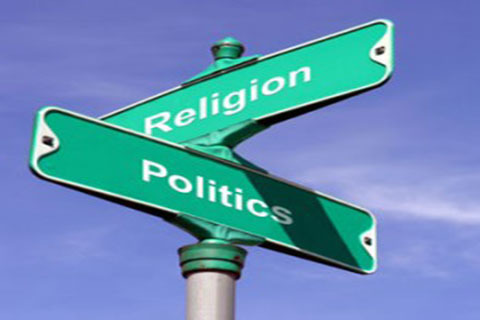 Federalism is a concept that creates an indefinite fear among the Sinhalese in South; similarly the concept of unitary state among the Tamil people of North. Both these concepts are only power sharing mechanisms which scatter the power from the center to the periphery. Alas, these concepts have not yet been able to address the national question progressively by making the correct use of these concepts in the absence of proper knowledge of ordinary people, and on the other hand, since those who are well knowledgeable on these concerns do not interpret them as necessary; so the correct meaning of these mechanisms have been blurred.

However, conceptually secularism is a very good measure in deciding the status of the state in the modern world. This article is a primary inquiry about the practice of Secularism with regard to Sri Lankan polity.

Understanding the concept of secularism with equality

The concept of secularism has two basic meanings: First, separation of religion from the state. This basically means neither the state gives prominence to any particular religion, nor it gives space for the state in order to make religious bias laws. That is, the state seeks to maintain neutrality and impartiality in the face of every religion. The Indian legal writer, B. Chakrabaraty, introduced this idea as creation of an “impassable wall” between the state and religion.

Secondly, respect for all religions on an equal basis. This idea is also based on the condition that a country is equated. According to formal interpretation, equality is regarded as being equal for everyone. Radical interpretation of the concept of equality in the sense that special consideration is given to individuals to eliminate inequality. According to John Rowles, paying special attention to a child who does not have an educational drive is not inequality. Because the ultimate purpose of this unique treatment is to create equality. Accordingly, any religion will interfere with the rule of the state, and then the foundation of secularism will surely deteriorate. On the other hand, state grants special attention predominantly on one particular religion for the purpose of establishment of religious equality, but will not against the concept of secularism.

Virtually the concept of secularism is a “Watch Dog” of Indian democracy. Although the term ‘Secular’ was not exactly included into the constitution made by the constituent assembly earlier, there was a wide drawn discussion among leading constitution architectures, including Dr Ambedkar, Neru and Ghandhi that state should be exclusively separated from religion. Marking a milestone, the 42nd Amendment, which was added in 1976 to the Constitution, made India a secular state.

U.S.A is one of the countries that value ​​this concept very much. From the first amendment to the constitution, religion is distanced from the state. This amendment neglects the oligarchical power that the Congress earlier had to prohibit religions. In the judgment of Lerron v. In Kurtzman, every State’s law lists out three preliminary trials to pass before the law. Firstly, explaining the religious nature of the act, secondly, ensuring that the Act does not prohibit a religion or not provide any kind of special attention over any religion and thirdly, the purpose of the act is to ensure is not to foster a relationship between the state and religion.

Is Sri Lanka Religious or Secular?

Article 9 of the Constitution undoubtedly contravenes to the very first component of the concept of secularism. According to that article, “The Republic of Sri Lanka shall give to Buddhism the foremost place” “accordingly it shall be the duty of the state to protect and foster the Buddha Sasana.” This clearly indicates that the article has created a strong bond between the state and Buddhism.

In this context, the state has to intervene to preserve Buddhism. It is thus necessary to pass the test of Sinhala-Buddhist Majoritarianism, which is mandatory among the Sinhala Buddhist majority, even if the government has not mediated any law. If it is unable to pass the test, the government will have to take a step back. This is because the inquiry cannot be passed under the theme of legalizing homosexuality. This indicates that the state has been unable to maintain strong neutrality or impartiality in the presence of Buddhism. Even if a citizen is not entitled to discriminate or specialize in terms of the Article 12 (2) of the Constitution under the grounds of ethnicity, religious adherence and language, etc. are said to apply, the Sinhala-Buddhist opinion is yet a decisive factor in the political mapping of the government. No government has power to evade that view. Even the present government, which did not grant mandate for large quantum of Sinhala-Buddhist majority, has been unable to avoid the Hegemonic parameter.

On the other hand, state intervention in the sense, giving predominance to one religion, and there is also an ideological dilemma of equal treatment for all religions, because the very essence of equality is the source of equality. In this light, Sri Lanka is considered to be a semi-secular state not directly a religious or a non-secular state. 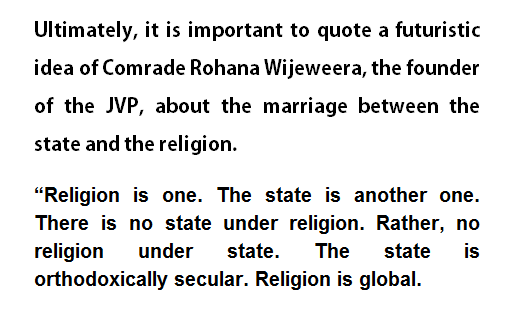 Buddhism is a rhetoric

A group of prominent constitution architectures who closely got involved with the ongoing constitution making process went to an isolated area to educate the way in which the shape of new constitution ought to be. Their question to the villagers was whether the new constitution should protect the Buddhism? Or not?

One villager stood up immediately and said so.

“Gentlemen Buddhism has been protected over time by the monks of the temple. We are treating the monks to protect our religion in faithful hearts. That would not be a matter of the Constitution. ”

Here, the essence of all the discussions we have been highlighted so far is in this statement.

On the one hand, keeping Buddhism as a mere rhetoric and smoking over it, is a very much political project. Being a Sinhala-Buddhist is still a decisive factor to become the president of Sri Lanka. Preserving Buddhism is a major promise that is well received in the election promissory note in every presidential election. On the other hand, politicians have a great opportunity to legitimize their promise of protection of Buddhism. This is thus all benefits are not given effect to the Maha Sangha, to temples, or to Buddhism in general.

Ultimately, it is important to quote a futuristic idea of ​​Comrade Rohana Wijeweera, the founder of the JVP, about the marriage between the state and the religion.