Understanding a State of Emergency i n Sri Lanka: March 2018 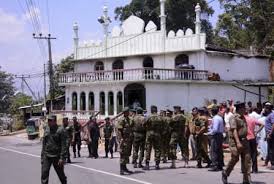 This brief illustrates basic information on the terms, legal procedure and concerns regarding the curtailing of citizens’ rights around a state of emergency.

What is meant by a ‘State of Emergency’?

A state of emergency is a situation of exceptional threat, danger, or disaster in the life of a nation, the existence of which is clear to all, in which the government is given extraordinary powers not permitted during normal times to deal with the threat, including powers to restrict certain fundamental rights.

The Sri Lankan Constitution does not provide a formal definition of a state of emergency. Instead, the conditions that may give rise to the need for emergency powers are described in the Public Security Ordinance (PSO). The President may issue a Proclamation of a state of emergency where, “in view of the existence or imminence of a state of public emergency, he is of the opinion that it is expedient to do so, in the interests of public security and the preservation of public order or for the maintenance of supplies and services essential to the life of the community.”

This is therefore (1) a general description of the conditions that would give occasion to the President to proclaim an emergency, along with (2) the aims – national security, public order, and maintenance of essential services – for which such powers are to be used.

What is the procedure for the declaration of emergency?

Under Article 155 of the Constitution, a state of emergency is brought into being by a Proclamation made by the President, which brings into operation the provisions of the PSO. This includes the power to make Emergency Regulations by the President, which may override any law, regulation, or provincial statute. Emergency Regulations however cannot override the Constitution.

Was this procedure followed in March 2018?

Yes. The President issued the Proclamation on 6th March, effective for a period of one month. Whether or not the circumstances warranted a declaration of emergency may be debatable, but it is legally irrelevant, because that decision is at the sole discretion of the President (and in any case, on this occasion he did so in consultation with the Cabinet). He also promulgated a set of Emergency Regulations on the same day, which are quite standard. Unless Parliament approves the Proclamation by resolution within fourteen days of the Proclamation, it will expire by operation of law on 20th March. The President can either let it lapse or revoke it himself during this period. If he wants the state of emergency to extend beyond that date, he must get Parliament to approve it. A fresh Proclamation (and parliamentary approval) is needed if the state of emergency is to be extended beyond the initial one month.

What are the legal effects of a state of emergency?

The most significant power under a state of emergency is the general law-making power given to the President in the form of Emergency Regulations, which may override any law except the Constitution. This extraordinary power is unusual in that it impacts on the Separation of Powers. Normally, it is only the legislature and not the executive that can make law. Although sometimes the power to make rules is delegated on the executive by some Acts of Parliament, such rules cannot override law. These two aspects – that they are made by the President and that they prevail over other laws – give Emergency Regulations their special character. However, it is also important to remember that Parliament can at any time revoke or amend any Emergency Regulation by resolution. Likewise, the courts will under certain circumstances annul Emergency Regulations that violate the Constitution.

The PSO enumerates various purposes for which Emergency Regulations may be made. These include provision for the detention of persons, commandeering and acquisition of private property, entry and search, and hearings, appeals and compensation for those affected by the regulations. Other than the power to make Emergency Regulations, the PSO also sets down the special powers of the President during a state of emergency, including calling out the armed forces in aid of the civil power, the procedure for arrest, detention and executive review of detention, and the suspension of certain safeguards for the liberty of the individual in the Code of Criminal Procedure.

To what extent are citizens’ rights curtailed in this period?

There are a number of criminal law rights that may be curtailed under the PSO, as noted above. The Constitution also permits restrictions to be placed on fundamental rights through Emergency Regulations.

The fundamental rights that may be restricted by law (including Emergency Regulations) in the interests of national security and public order are: the presumption of innocence, the burden of proof, and retroactive penal sanctions; equality before the law and non-discrimination; the ordinary procedure for arrests and judicial sanction for detention; and the fundamental rights to freedom of expression, assembly, association, movement, occupation, religion, culture and language.

The Constitution does not establish substantive controls on the extent to which these fundamental rights may be restricted, except that they be imposed by law (for which purpose, ‘law’ includes Emergency Regulations, and is therefore not a control at all). Thus, for example, there is no constitutional requirement that the restriction be proportionate to the harm sought to be averted, and it falls entirely to the goodwill of the executive to act responsibly and/or the courts’ willingness to enforce the rule of law and fundamental rights. Sri Lanka does not have a reassuring record on either.

Independently of emergency powers, the government also has recourse to the Prevention of Terrorism Act (PTA). These antiterrorism powers are extensive, and their use is not subject to the formal requirement of continuous parliamentary approval as in the case of emergency powers.

How does the Sri Lankan legal framework for states of emergency align with international standards?

The Sri Lankan framework complies with international standards insofar as it requires a formal proclamation, parliamentary approval for declaration and extension, and there is some judicial oversight over the exercise of emergency powers. However, Parliament is not very good at holding the executive to account even in conditions of normalcy, and historically, it has been even less effective in times of crisis. Presidents usually are also the leaders of the party enjoying the majority of seats in Parliament, and this prevents meaningful scrutiny and accountability of presidential action. The Supreme Court has a mixed record as a checking mechanism. Some judges in the past have been robust especially in the protection of fundamental rights against abuses through emergency powers. At other times, the courts have failed to check the executive through excessive deference.

The Sri Lankan law is not in line with a number of international standards. The Constitution permits restrictions to be placed on a number of fundamental rights through emergency powers which are not allowed by international best practice, including the International Covenant on Civil and Political Rights (ICCPR) to which Sri Lanka is state-party. As already noted, the Constitution also does not require restrictions on fundamental rights to be proportionate to the legitimate aims of national security. Although this principle has been judicially recognised by the Supreme Court on some occasions, it is not applied uniformly. There is no requirement in Sri Lankan law that emergency measures be consistent with the state’s international obligations, in particular, international humanitarian law and law of armed conflict. Likewise, the Constitution expressly permits restrictions to be placed on the right to non-discrimination during a state of emergency, which is clearly contrary to international human rights law. However, it is required by the ICCPR that a state-party derogating from rights during an emergency should immediately inform other state-parties through the UN Secretary General and Sri Lanka has frequently made these derogation notifications in previous states of emergency.

What concerns are raised by the past experience of states of emergency?

Many of the widespread abuses during past emergency periods occurred in the context of a protracted war. Emergency powers frameworks in democratic constitutions – including ours despite all its defects – are predicated on the central distinction between times of ‘normality’ and ‘exceptional’ times of crisis. It is the recognition that exceptional times and crises demand exceptional responses that justifies the grant of extraordinary powers to the executive as well as the restriction of fundamental rights. What happens in conditions of protracted conflict is that the ‘exception’ becomes the ‘normal’, and emergency rule becomes normalised for both the government and citizens who get used to it. This has long-term effects on a society.

We no longer have an active conflict to justify the prolongation of a state of emergency, so it seems likely that the current state of emergency will either lapse or be revoked sooner rather than later. However, this begs deeper questions about the circumstances that necessitated – in the mind of the government – the invocation of these powers. These include the lack of post-conflict reconciliation and inability to embrace diversity, the culture of criminal impunity and selective application of the law, the social tolerance of violence, the deficiencies of the police in relation to their basic responsibility to maintain law and order, the impotence of secular authority in face of religious power, and the similarly medieval ignorance and superstition that allows atavistic tribalism to thrive in our society.