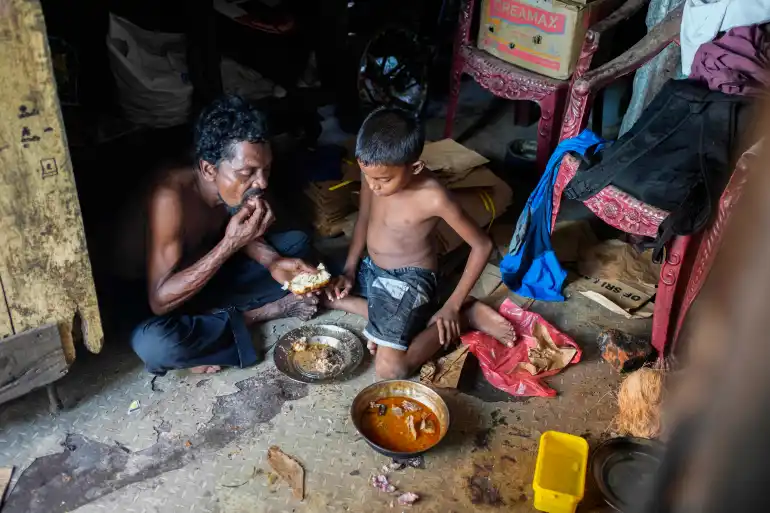 Image: A father and son share a meal at their shanty in Colombo, Sri Lanka [File: Eranga Jayawardena/AP]

UN agencies in Sri Lanka say they raised $79m in aid, they need an additional $70m to cater to growing number of poor people.

The number of people in Sri Lanka needing urgent humanitarian help has doubled to 3.4 million, the United Nations has said as it warned of a worsening food crisis in the south Asian island nation that declared itself bankrupt in July amid an unprecedented economic crisis.

UN agencies working in Sri Lanka in a joint statement on Tuesday said that they had raised $79m to feed those in need, but the increasing number of poor people meant an additional $70m was needed.

UN agencies had estimated in June that 1.7 million out of the 22 million population in Sri Lanka required help.

The UN said its revised plan aims at feeding 2.1 million people, including pregnant mothers and school children and providing livelihood support to 1.5 million farmers and fishermen.

Sri Lanka is facing its worst economic crisis since its independence from the United Kingdom in 1948 and has been enduring soaring inflation, power blackouts, and fuel rationing since last year.

The country defaulted on its $51bn external debt in mid-April and is in talks with the IMF for a $2.9bn bailout.

Months of protests against high prices and shortages of food and medicines led to the toppling of President Gotabaya Rajapaksa in July.
The UN has said that the poverty rate in the South Asian nation has doubled to 25.6 percent this year, up from 13.1 percent last year.
Share
Facebook
Twitter
WhatsApp
Pinterest
Email