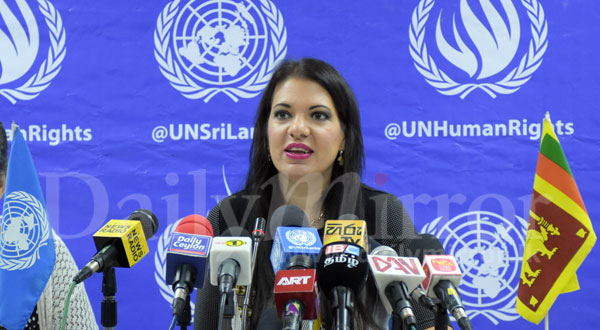 COLOMBO: The US Special Rapporteur on Minority Issues, Rita Izsak-Ndiaye, has suggested to the Sri Lankan government to set up a fully-empowered Minority Rights Commission under the constitution which is now being drafted.

Speaking to the media at the end of her nine day tour of the island in which she met a cross section of people both from the minority communities and the majority Sinhalese-Buddhist community, Izsak-Ndiaye said that in the short term, government should set up a “dedicated minority rights mechanism” with representatives of the minorities to coordinate policies and actions on minority issues.

She urged the government to consider “affirmative action” to give adequate representation to under-represented communities in the government, judiciary, armed forces and law enforcement. Representation here should be along ethnic, religious, linguistic and gender lines. She pointed out the minorities are aggrieved that they are not adequately represented in national institutions and decision making structures.

Izsak-Ndiaye also suggested that the proportional representation system should ensure that the minorities are adequately represented in the elected bodies on the basis of accurate and disaggregated social data. She also stressed the need to change the official language policy so that the present linguistic barriers are dismantled and the government and the minorities are able to reach out to each other better.

On religions minorities, she said that the Muslim Marriage and Divorce Act of 1951 should be reviewed and a new law drafted to be in line with international human rights standards. To promote religious tolerance she suggested that in schools, every child be taught the basics of all the major religious in Sri Lanka.

Izsak-Ndiaye recommended that the Prevention of Terrorism Act be replaced by a law which is up to international standards and review cases under PTA to either charge and prosecute the detainees or release them. The heavy military presence in North Sri Lanka is resented by the people there as relations between the Tamils and the near totally Sinhalese military had been adversarial for decades.

On the whole, the UN official found the minorities to be hopeful about getting a better deal from the present Sri Lankan government especially after it launched a large-scale consultative process. But people felt that progress could be faster. Izsak-Ndiaye felt that many things could be done in the short term to prevent the minorities from lapsing into the hopelessness which characterized the past.