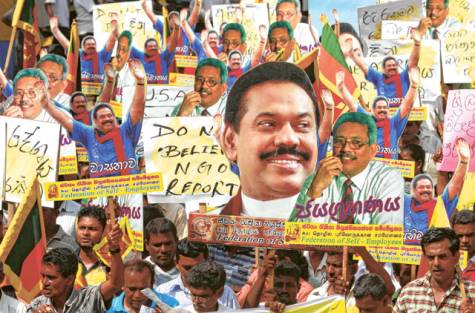 There can be no lasting peace and stability without dealing with the most serious past violations and without a political response to the aspirations of Sri Lanka’s communities. The UN cannot fulfil its post-conflict and development responsibilities in Sri Lanka without addressing these fundamental concerns; and the UN should continue to support implementation of the recommendations of the Panel of Experts on Accountability
Read the full report here

75. Cultural challenges: The UN can face significant challenges in retaining the essential support of a Government to help in delivering assistance while at the same time responding to serious violations of international law that may require the UN to issue criticism of the same Government. In the case of Sri Lanka, a number of UNCT and UNHQ senior staff perceived these challenges as dilemmas or as conflicting responsibilities : (i) choosing not to speak up about Government and LTTE broken commitments and violations of international law was seen as the only way to increase UN humanitarian access; (ii) choosing to focus briefings to the Security Council on the humanitarian situation rather than on the causes of the crisis and the obligations of the parties to the conflict was seen as a way to facilitate constructive engagement by the Secretariat with Member States; and (iii) UN support in the establishment of internment camps was seen as the only option for the UN to assist IDPs emerging from the Wanni, even if the IDPs were deprived of freedom of movement and the UN had limited access to them.72 Decisions at UNHQ and in the field were affected by an institutional culture of trade-offs. The tendency to see options for action in terms of dilemmas frequently obscured the reality of UN responsibilities. In fact, with its multiplicity of mandates and areas of expertise, the UN possessed the capabilities to simultaneously strive for humanitarian access while also robustly condemning the perpetrators of killings of civilians. It should have been able to push further for respect for international norms in the delivery of assistance to IDPs and avoid accusations of complicity in the detention of IDPs.

76. There was a continued reluctance among UNCT institutions to stand up for the rights of the people they were mandated to assist. In Colombo, some senior staff did not perceive the prevention of killing of civilians as their responsibility – and agency and department heads at UNHQ were not instructing them otherwise. Seen together, the failure of the UN to adequately counter the Government’s under-estimation of population numbers in the Wanni, the failure to adequately confront the Government on its obstructions to humanitarian assistance, the unwillingness of the UN in UNHQ and Colombo to address Government responsibility for attacks that were killing civilians, and the tone and content of UN communications with the Government on these issues, collectively amounted to a failure by the UN to act within the scope of institutional mandates to meet protection responsibilities.

77. The tone, content and objectives of UNHQ’s engagement with Member States regarding Sri Lanka were heavily influenced by what it perceived Member States wanted to hear, rather than by what Member States needed to know if they were to respond. Reflection on Sri Lanka by UNHQ and Member States at the UN was conducted on the basis of a mosaic of considerations among which the grave situation of civilians in Sri Lanka competed with extraneous factors such as perceptions of the role of the Secretariat in its relations with Member States and frequently inconclusive discussions on the concept of the Responsibility to Protect. In particular, the Security Council was deeply ambivalent about even placing on its agenda a situation that was not already the subject of a UN peacekeeping or political mandate; while at the same time no other UN Member State mechanism had the prerogative to provide the political response needed, leaving Sri Lanka in a vacuum of inaction.

78. Framework of action: The overall framework for UN action in Sri Lanka was not well-adapted to the Organization’s responsibilities, given the situation. Over the past 15 years, Member States and the UN system have agreed that peace, development and the protection of basic rights are deeply intertwined and mutually reinforcing and that they must be tackled together. Under UN auspices, Member States have adopted a range of interlinked standards that define UN protection responsibilities in situations such as armed conflict. These include: the international human rights law framework of civil and political and economic, social and cultural rights; the adoption of the Responsibility to Protect; and numerous resolutions by the Security Council on protecting civilians in armed conflict through the protection of international human rights and humanitarian law73. All UN entities, whether in the Secretariat or UNCT, are expected to support follow-up and implementation of these standards74; and UN action in Sri Lanka was being measured partly on this basis. And yet, the tools with which the UN can meet its responsibilities vary widely across different country-situations ranging from, on the one hand, Security Council-mandated missions designed for complex political and armed conflict situations to, on the other hand, the UN’s infrastructure in Sri Lanka consisting of a UNCT and RC designed primarily to support development.75 Although additions were made to the UNCT infrastructure in Sri Lanka to help it respond to the conflict, most notably the addition of the Humanitarian Coordinator role and the significant support of OCHA, the staffing composition and structural posture of the UNCT and UNHQ relative to Sri Lanka nevertheless remained largely unchanged. While the UN’s infrastructure remained static, the worsening situation was drastically changing both the UN’s responsibilities and the expectations of the UN’s role. The UN’s development and humanitarian branches were unsuited to the situation and unable to fully address the UN’s political and human rights and humanitarian law responsibilities; while it was these same responsibilities that became most fundamental to the survival of civilians.

79. Above all, UN action in Sri Lanka was not framed by Member State political support. In the absence of clear Security Council backing, the UN’s actions lacked adequate purpose and direction. Member States failed to provide the Secretariat and UNCT with the support required to fully implement the responsibilities for protection of civilians that Member States hadthemselves set for such situations.

80. Systemic failure: The primary responsibility for killings and other violations against the estimated 360,000 or more civilians trapped during the final stages of the conflict in the Wanni lies with the Government of Sri Lanka and the LTTE. Under very difficult conditions, the UN succeeded in transporting some humanitarian assistance in convoys into the Wanni, in providing a degree of emergency shelter and relief to almost 280,000 survivors who were able to leave the conflict zone, and in positively influencing some aspects of Government plans for IDPs; exceptional attention was devoted to the situation by some senior UNHQ officials, including the USG-Humanitarian Affairs; and the Panel was inspired to find how far many individual staff in the field have gone in their efforts to uphold the principles of the Organisation. Nevertheless, the Panel’s report concludes that events in Sri Lanka mark a grave failure of the UN to adequately respond to early warnings and to the evolving situation during the final stages of the conflict and its aftermath, to the detriment of hundreds of thousands of civilians and in contradiction with the principles and responsibilities of the UN. The elements of what was a systemic failure can be distilled into the following: (i) a UN system that lacked an adequate and shared sense of responsibility for human rights violations; (ii) an incoherent internal UN crisis-management structure which failed to conceive and execute a coherent strategy in response to early warnings and subsequent international human rights and humanitarian law violations against civilians, and which did not exercise sufficient oversight for UN action in the field; (iii) the ineffective dispersal of UNHQ’s structures to coordinate UN action and to address international human rights and humanitarian law violations across several different UNHQ entities in Geneva and New York with overlapping mandates; (iv) a model for UN action in the field that was designed for a development rather than a conflict response; (v) the most senior position in the field graded at a D1 seniority that was below the heavy responsibilities required of the position, and a corpsof senior staff that did not sufficiently include the armed conflict, political, human rights and international humanitarian law and related management experience to deal with the challenge Sri Lanka presented, and who were given insufficient support; (vi) inadequate political support from Member States as a whole, notwithstanding bilateral efforts from all regions, and inadequate efforts by the Secretariat to build such support; and (vii) a framework for Member State engagement with international human rights and humanitarian law protection crises that was outdated and often unworkable, in part because it did not enable Member States to reach a sufficiently early and full political consensus on the situation and the UN response.

81. As this report was being completed, the Government submitted its second Universal Periodic Review to the Human Rights Council. In addition, the Permanent Representative of Sri Lanka told the Panel that the Government had made significant progress in implementing the LLRC recommendations and that it was inviting OHCHR to conduct a technical mission to Sri Lanka. In this regard, the Government is indicating its efforts to respond to aspects of the Human Rights Council’s March 2012 resolution on Sri Lanka.

82. It is beyond the scope of the Panel’s mandate to assess current events and corresponding UN action in Si Lanka. It is nevertheless clear that there can be no lasting peace and stability without dealing with the most serious past violations and without a political response to the aspirations of Sri Lanka’s communities. The UN cannot fulfil its post-conflict and development responsibilities in Sri Lanka without addressing these fundamental concerns; and the UN should continue to support implementation of the recommendations of the Panel of Experts on Accountability.

72 Interviews with UN Staff and diplomats by the   Panel.
73    See for example the operative paragraphs of S/RES/1674 (28 April 2006) as well as its preamble references to
past Security Council resolutions.
74    The Security Council “Demands that all States fully implement all relevant decisions of the Security Council, and in this regard cooperate fully with United Nations peacekeeping missions and country teams in the follow-up and implementation of these resolutions;” Security Council resolution 28 April 2006, (S/RES/1674) (para. 10).
75    The RC system, created by General Assembly resolution 32/197, was built on the premise that the “overall
responsibility for, and coordination of, operational activities for development carried out at the country level” was to be entrusted to a single official.