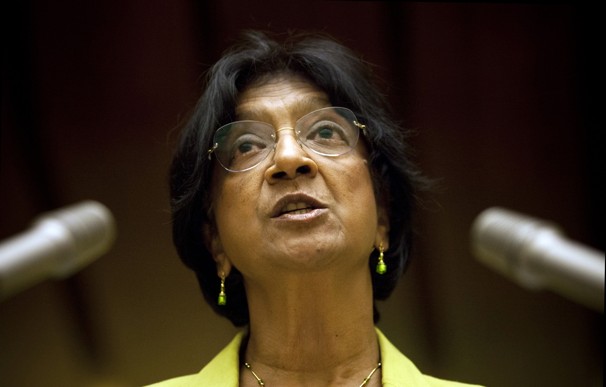 By JOHN HEILPRIN
The United Nations has singled out 16 nations for cracking down on critics, saying most of those countries’ governments are going unpunished for their acts of reprisal.

U.N. High Commissioner for Human Rights Navi Pillay told a special session of the Human Rights Council that the 16 nations detailed in a new report “have been far from sufficient” in preventing members of their own governments from resorting to intimidation and attacks on various activists.

“Reprisals and intimidation against individuals continue to be reported,” she told the 47-nation council. “People may be threatened or harassed by government officials, including through public statements by high-level authorities.
Associations and NGOs may see their activities monitored or restricted. Smear campaigns against those who cooperate with the U.N. may be organized. Threats may be made via phone calls, text messages or even direct contacts. People may also be arrested, beaten or tortured and even killed.”

Pillay said there also has been a “lack of accountability in relation to the majority of reported cases of reprisals.”

A Colombian man who reportedly witnessed the execution of several civilians said, for example, that he was subjected to death threats and beatings after reporting it to U.N. officials, and then was threatened on a street in Baranquilla in May a day after he met with a UN official.

“What were you doing with the U.N. woman yesterday?” the man said he was asked.

One activist, Mohammed Al-Maskati, told the council Thursday that as president of the Bahrain Youth Society for Human Rights he had “received more than a dozen anonymous phone calls threatening my life and the safety of my family” during the previous three days because he tweeted that he would be attending the council session.

Bahrain’s human rights minister, Dr. Salah Bin Ali Abdulrahman, told The Associated Press that “we are serious about issues related to human rights principles” and that any reported allegations of such abuses are investigated.

“I am willing to investigate any cases if there is some evidence or documents regarding reprisals,” he said in an interview.

“It’s important for us, if there are any reprisals or violations happening to anybody, individuals or citizens, we have a full judicial system, fully independent,” said Abdulrahman, who is a family practice medical doctor, adding that activists are raising the issues more outside the country than within it. “If anybody is being violated or threatened, they should report that in Bahrain.”

The country’s unrest, part of the Arab Spring, began in February 2011 when its Shiite majority began an uprising demanding a greater political voice in the Sunni-ruled country, which is home to the U.S. Navy’s 5th Fleet.

Abdulrahman said the country’s series of reforms, including giving more powers to the elected parliament, holding open dialogues and educating people about their rights, would eventually include most measures recommended by its own and the U.N.’s reviews.

Pillay urged the council — and the world’s nations — to do more.

“We need more coherent and solid strategies to put an end to reprisals,” she said. “Reprisals are not only unacceptable: they are also ineffective in the long term. Preventing people from expressing their will or their dissent freely, does not succeed. Ultimately, freedom will always prevail. And information will always find its way to the outside word.”