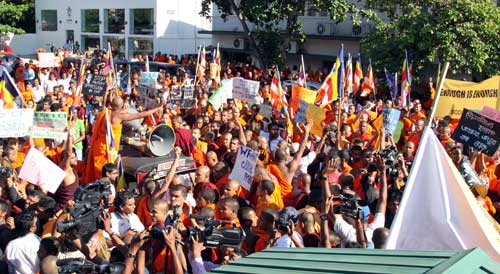 Muslim businessmen and corporate leaders expressed concern and disappointment over being targeted by the radical group ‘Bodu Bala Sena’, warning that it would have an adverse impact on the economy as the country struggles to mobilise both domestic and foreign investment while business chambers decried growing ultra-nationalistic sentiments in the country, putting the very foundations of the economy at risk.

The Bodu Bala Sena last weekend carried out a vociferous picketing campaign outside clothing retail chain Nolimit’s outlet in Maharagama, alleging that complementary sweets given to customers were laced with chemicals inducing impotency.

Sources told The Island that the sweets were manufactured by a popular local confectioner, not controlled by Muslims.

“Businesses run by Muslims have increasingly come under various smear campaigns in the recent past. The allegations, such as the sweets, are baseless and designed to create doubt in the minds of consumers. We are interested in doing business, not religion nor race. We serve people from all walks of life, race and creed. They trust us and keep coming to us because of our products and services,” one Muslim businessman said not wanting to be named.

“The spread of false information by certain groups with vested interests are shrugged off by many our clients. Many of our non-Muslim clients have expressed disappointment and disgust over the latest trend and they are with us. We hope the government would do something about this because it could lead to something far worse. The fear psychosis that some people are trying to create about the Muslims would only hurt the peace that was won in 2009, and have a negative impact on the economy,” he said.

Another businessman, not wanting to named, said business came naturally to many Muslims. “What I mean to say is this, we work very hard and this is why we are successful.”

From street vendors, to corner shops, retail giants and diversified listed corporates, the country’s Muslim community has made its mark in the country’s economy.

“Our economy depends on oil exports from the Muslim world, and if not for their credit lines where would we have been? West Asia is also fond of our tea. This government cannot and should not lay back and watch what is happening. The consequences would be too severe for all communities if things are allowed to go out of hand.”

Another corporate leader said it would not be in the best interests of Muslim-owned businesses to press charges against those spreading rumours and false information. “This would only aggravate the matter. But the government should step in and play a more active role. Protect the peace; be fair by all; that is all the government should do,” he said not wanting to be named.

Business Chamber of Commerce Secretary General Jagath Savanadasa says ultra-nationalistic impulsive behaviour would hurt the entire country, not just its economy. “This kind of behaviour is very bad. We should, together, uplift the country’s economy and not bring it down by creating enmity. Even during the worst of times during the decades long conflict there was no enmity between Sinhala and Tamil businesses, so it is shocking that the Muslim community is being targeted.

“We should maintain healthy relationships with the Muslim community in Sri Lanka because we are all, after all, Sri Lankans. If there are any accusations against this community it must be examined first before ultra-nationalistic impulsive behaviour gets the better of us. This would also send bad signals to the international community. We trade heavily with the Muslim world and how can we survive without them? A little nationalism is good, but ultra-nationalism is a very dangerous thing and would do a lot of harm. It is saddening to note the merging trends. We can only hope sanity would prevail,” Savanadasa said.

The National Chamber of Commerce of Sri Lanka (NCCSL) Secretary General E. M. Wijestillake said, “The chamber supports businesses of all communities, Sinhala, Tamil and Muslim, and we would stand by all our constituencies.” He did not wish to elaborate owing to the sensitive nature of the problem engulfing the country.
http://www.island.lk/index.php?page_cat=article-details&page=article-details&code_title=70876