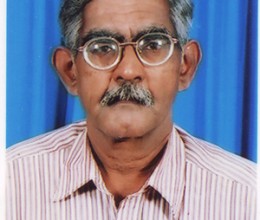 The news editor of Udayan newspaper in Jaffna is said to be in serious condition following an assault this evening (July 29).

Two men armed with iron clubs had ambushed Gnanasundaram Kuhanathan , 55, in a motorcycle as he was returning home from work.

He has been admitted to the ICU of Jaffna Hospital with head injuries.

The incident has taken place at Navalar Road in Jaffna town around 7.30pm .

Colombo – A news editor working for an anti-government newspaper in northern Sri Lanka was attacked by an unidentified gang outside his office on Friday evening, colleagues reported.

Ganasundaram Kuhanathan, 55, of the Tamil language Udayan newspaper based in the northern city of Jaffna was hit with an iron bar by two men who had followed him.

He was rushed to hospital with head injuries.

The newspaper office and its journalists have come under attack in the past, with two staffers dying in a gun attack in 2006.

The newspaper was critical of the government during the conflict between government troops and Tamil rebels of the Liberation Tigers of Tamil Eelam (LTTE)
http://www.monstersandcritics.com/news/southasia/news/article_1653961.php/Anti-government-newspaper-editor-attacked-in-northern-Sri-Lanka

The Chief news editor of the Jaffna-based Udayan news paper was assaulted by and an unidentified group this evening, police said.

Gnanalingam Kanganathan was attacked while he was traveling along the Navalar Road in Jaffna. Kanganathan has been admitted to the Jaffna Hospital, while police are conducting further investigation. (Thas, Krisan and Supun Dias)

News Editor attacked in Jaffna
Two unidentified men who came in a motorbike attacked the Chief News Editor of Uthayan Daily in Jaffna, Gnanasundaram Kuganathan, Friday around 7:45 p.m., causing serious injuries to the 59-year-old news editor. Till the end of war, Mr. Kuganathan was living inside the paper office for 3 years as the news paper had come under attacks by occupying SL Army-backed operatives in May 2006 and in March 2009. The staff at the paper office have been threatened by the EPDP paramilitary on several occasions. The timing of the attack signals that it was a ‘punishment’ by the SL military intelligence not favouring the ruling UPFA alliance during the campaign for civic elections.

Mr. Kuganathan sustained injuries in his head and fainted, the residents of the area said. The victim was rushed to Jaffna Teaching Hospital.

The attackers had followed Mr. Kuganathan in a motorbike while he was walking on Kasthooriyaar Road, after leaving the office. They attacked him with a sharp iron rod till he fainted.

The attack has taken place near Kasthooriyaar Road – Naavalar Road Junction which is guarded by the Sri Lanka Army.

The modus operandi of the attack was similar to that on Ramesh, the personal secretary of Suresh Premachandran MP, who narrowly escaped death from a killer squad. The attack on Ramesh came while the commander of the occupying SL Army in Jaffna openly threatened to arrest a TNA MP.

In addition to the paramilitary elements, Gotabhaya Rajapaksa, the SL defence secretary, is also grooming a killer squad operated under his eyes, informed military correspondents in Colombo said.

A senior Tamil journalist was attacked by an unkown gang in Jaffna a shortwhile ago, a spokesman for the newspaper said.

Mr. Ganasundaram Kuhanathan , 55  News Editor of the Jaffna based Udayan newspaper was attacked as he was proceeding home. Two persons following him had attacked him with an iron rod.

The attackers later escaped on a motorcycle. Mr. Kuhanathan had managed to run into the house with the injuries and was later rushed to hospital. .